Henry B. Wesner was a native of Pennsylvania, one of eight children born to parents Anthony and Julia Wesner of German ancestry. His birth date was September 27, 1853, according to the website Find-A-Grave. When he was eleven years old the family moved to Galesburg, Illinois.

At age 25 Henry married Josephine C. Biggerstaff and in May of 1878 their only child, daughter Georgia, was born. By the 1880 federal census he had made his way to California and lived in the Los Nietos (Whittier) area, where he was a farmer.

Delilah Leontium Beasley’s book The Negro Trail-Blazers of California (1919) is a classic in the field of California black history. In it she featured notable achievements of the black men and women of California, from the 1840s to the late nineteenth century.

Beasley (1871–1934) combed the California Archives in the Bancroft Library at the University of California, Berkeley, to compile her book. The nine years she spent writing it soon paid off: she became California’s first black woman to write regularly for a newspaper. She reported for the Oakland Tribune and the Oakland Sunshine, the state’s leading black newspaper.

Beasley was a so-called “race women.” She and other black women sought to “lift as they climbed." Decades before the mid-twentieth-century civil rights movement, these women organized against and tried to change the prevailing racial climate in which black Americans lived.

In 1915, Beasley was working to counteract the negative stereotypes presented in the highly controversial and overtly racist film The Birth of a Nation, which was screening in Bay Area theaters. The same year, as one of the state’s most influential black reporters, she covered the Panama-Pacific International Exposition (PPIE), San Francisco’s world fair. She interpreted for African Americans what the fair could mean for them in an era of racism and discrimination.

The African American community wanted to claim a space at the fair where they could represent themselves. There was debate about having a “Negro Day,” but it never materialized. Instead the Oakland Sunshine challenged readers to turn out for “Alameda County Day” to “show to our visitors that this is our Fair and our State.”

The community rallied, throwing themselves into planning the day and showing up in droves. The Day kicked off with a parade down Market Street and onto the main fairgrounds. Among the numerous floats were several filled with black children and decorated with cherry blossoms. Beasley wrote: “The mere fact that colored children marched through the streets of San Francisco, carrying the Stars and Stripes, showed a decided advance and change of feeling toward the colored race in these parts.” For Beasely and others, this display of beautiful, healthy black children had to have in some way countered the negative stereotypes prevalent during the era and at the fair.

In her book, Beasley emphasized the role of black women in the state’s history. Among them was twelve-year-old Virginia Stephens (1903–1986). The Oakland schoolgirl won a contest sponsored by the San Francisco Call Newspaper to nickname the fair. Her winning submission, one of 1,300 entries, was The Jewel City—a reference to the skyscraping, jewel-encrusted tower at the center of the fairgrounds.

Few people knew that Stephens was African American. As reported in The Crisis, published by the National Association for the Advancement of Colored People (NAACP), despite recognition in some local newspapers, “We regret to say that when it was discovered that Miss Stephens had colored blood there was a sudden silence on the part of the press and the only recognition ever given her was a season ticket to the grounds.”

Stephens might have remained anonymous but for the efforts of the black women’s club members who worked to influence prevailing attitudes of racial discrimination and inequality. At the fair’s Alameda County Day on June 10, 1915, they arranged for her to be crowned queen and to ride with fifty other African American children on a parade float described by the Oakland Sunshine as “a credit to the race.” Virginia Stephens went on to attend the University of California, Berkeley as an undergraduate and then BOALT law school. She was the first African American woman admitted to the bar in California and had a long career in the State Office of Legislative Counsel in Sacramento.

Portions of this blog are adapted from Erin Garcia and Shelly Kale, “Bravely Useful Part”: Five Women and San Francisco’s 1915 World’s Fair, posted on December 1, 2015 on www.PPIE100.org, sponsored by the California Historical Society.

Even as wary Californians fear that the promised El Nino may be slipping away, the old adage, "Be careful what you wish for,” comes to mind. The water story in the settled West has often been one of feast or famine: punishing drought followed by often damaging and deadly floods.

Among California’s most notorious weather events was the “Great Flood” of 1861–62, then the largest in the recorded history of the West and, as the New York Times reported, the “most disastrous flood that has occurred since its settlement by white men.” Although it did not occur in an El Nino year, a perfect storm of conditions conspired to create . . . the perfect storm. 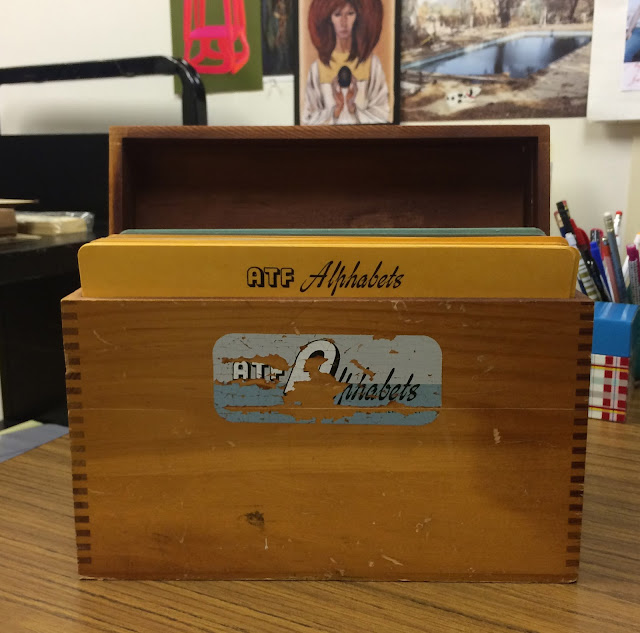 at Tuesday, February 23, 2016 No comments:
Email ThisBlogThis!Share to TwitterShare to FacebookShare to Pinterest

A Mirror of Us: CHS Celebrates the National Park Service Centennial

This summer, on August 25, the National Park Service turns 100 years old. Over the course of this Centennial year, the California Historical Society will celebrate the state’s significant contribution to “America’s best idea” by digging into our collections and sharing what we find with you.

From Redwood National Park in the north to Joshua Tree in the south, California’s parks are as varied and diverse as the population of the Golden State itself. The oldest, Yosemite, was established in 1880; the youngest, Pinnacles, graduated from monument to park just three years ago, on January 10, 2013.

Each California park has its own kind of beauty and all are a reflection of the society into which they were born.

In other words, both literally—as in the photo above—and figuratively, they are a mirror of us. We hope you enjoy the reflection.
Read more »
at Monday, February 22, 2016 No comments:
Email ThisBlogThis!Share to TwitterShare to FacebookShare to Pinterest
Labels: Death Valley, Joshua Tree, National Park Service, Pinnacles, Yosemite, Yosemite National Park


The California Historical Society joins the nation in observing the annual Day of Remembrance on February 19, when in 1942 President Franklin Roosevelt signed Executive Order 9066. The order paved the way for the removal of people of Japanese descent, citizens and noncitizens alike, from their homes and communities along the West Coast during World War II.

at Tuesday, February 16, 2016 No comments:
Email ThisBlogThis!Share to TwitterShare to FacebookShare to Pinterest

Cycles of Drought and Flood

“And it never failed that during the dry years the people forgot about the rich years, and when the wet years returned, they lost all memory of the dry years. It was always that way.”
—John Steinbeck, East of Eden

Alongside its promise of idyllic weather, California delivers cycles of floods and droughts. Our climate history demonstrates stretches of drought interspersed with heavy—and sometimes catastrophic—rains.

As our state struggles through a five-year drought and an El Nino winter, we find ourselves in the seemingly paradoxical period of simultaneous flooding and drought. And, as B. Lynn Ingram and Frances Malamud-Roam write in The West without Water: What Past Floods, Droughts, and Other Climatic Clues Tell Us about Tomorrow, “Climatologists now speak in terms of even deeper droughts, and larger and more frequent floods, for the future.”

This Day in History February 2, 1848: The Treaty of Guadalupe Hidalgo Ends the Mexican-American War

On February 2, 1848, in the village of Guadupe Hidalgo, Mexico, the Mexican-American War officially ended. What began as border dispute between Mexico and the United States along the Rio Grande resulted in historic territorial gains and losses.
Read more »
at Tuesday, February 02, 2016 No comments:
Email ThisBlogThis!Share to TwitterShare to FacebookShare to Pinterest

The recent debate over federal ownership of land in Utah brings into sharp focus the ownership and use of land in states where the federal government is a predominant or majority owner.


In California today, according to a 2004 U.S. Geological Survey and a 2012 review by the Congressional Research Service, about 45 percent of state land is owned and administered by the federal government.

California’s early history sheds light on how land ownership significantly influenced both the development of the state and the lives of its inhabitants. 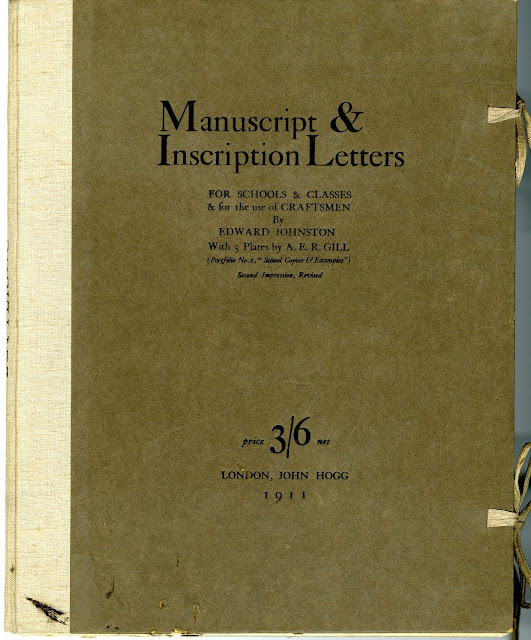 Today we take a look at Edward Johnston's Manuscript and Inscription Letters for School and Classes and for the use of Craftsmen. Johnston (1872-1944) is considered, along with his contemporary Rudolf Koch, to be the father of modern calligraphy. After studying manuscripts at the British Museum, Johnston took up his distinctive style of creating letters using a broad edged pen. 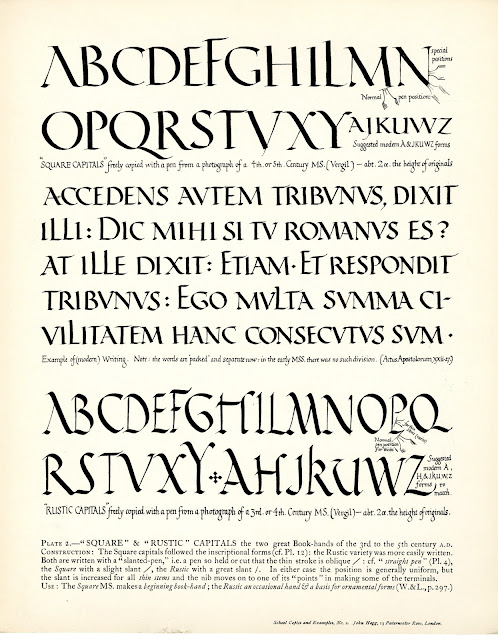 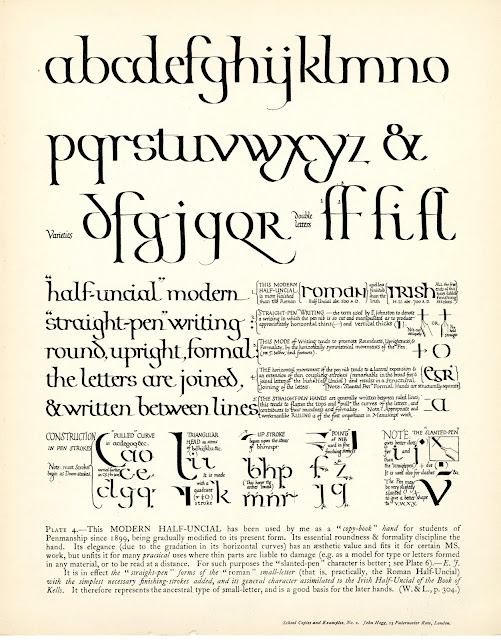 Johnston began teaching lettering at London's Central School of Arts and Crafts in 1899. Typeface designer and calligrapher, Eric Gill, was among his students. Gill contributed plates to this 1911 publication of Johnston's Manuscript and Inscription Letters for School and Classes and for the use of Craftsmen. 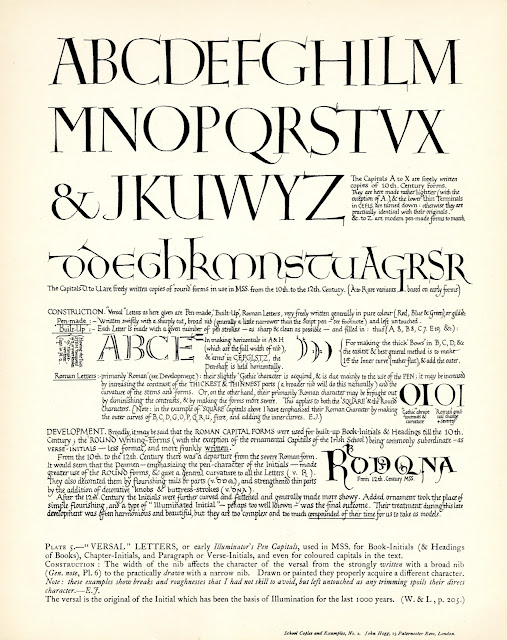 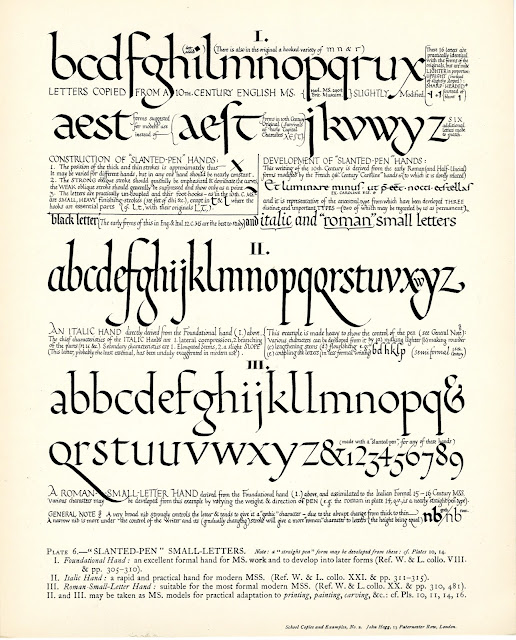 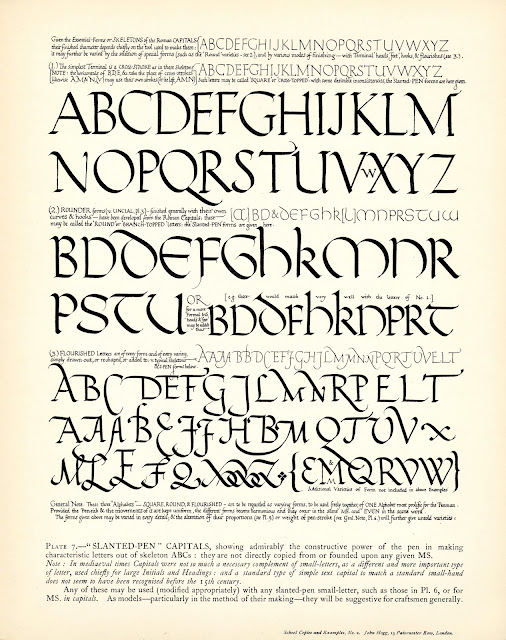