Make no Little Plans: Daniel Burnham and the American City

California Historical Society contributed an image of the map from Daniel Burnham’s Report on a Plan for San Francisco (San Francisco, Sunset Press, 1905) for this PBS documentary which will premiere Labor Day 2010. 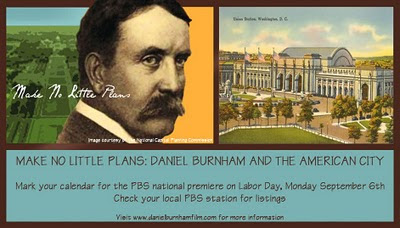 Narrated by Oscar nominated actress Joan Allen, MAKE NO LITTLE PLANS combines digital models, original drawings, personal letters, animated graphics and stunning visuals to highlight dramatic developments that transformed both Burnham and the American city-- the early development of the skyscraper; the awesome impact of the 1893 World’s Fair; and the physical reconfiguration of existing cities, including our nation’s capital.

Insightful commentary by some of the country’s most distinguished historians, architects, critics and urban planners enlivens the story as does an original musical score by composer Michael Bacon, who is well-known to PBS audiences.

“He had a personality that was as big as the subject of cities”, explains architect David Childs, a Fellow of the American Institute of Architects, and one of many noted commentators in the film. “We should care about Burnham because he was part of a group that changed ideas about planning and architecture and because of the fact that our cities are full of the history that he caused to happen.”
Check your local PBS station for listings.
For more information please visit:  www.pbs.org/make-no-little-plans
at Friday, August 27, 2010 No comments:
Email ThisBlogThis!Share to TwitterShare to FacebookShare to Pinterest
Labels: California Historical Society, Collections, History, San Francisco

The California Historical Society is hosting a Teacher Open House on August 26th.  If you are an educator we invite you to stop in between 4:00 p.m. and 7:00 p.m. for drinks and snacks, and to learn more about educational resources offered by CHS.  There will be books and free educational materials available.

Other local institutions participating in the Teacher Open House are: San Francisco Camerawork, Cartoon Art Museum, Contemporary Jewish Museum, The Society of California Pioneers, The Museum of the African Diaspora, Museum of Craft and Folk Art, SFMOMA, Yerba Buena Center for the Arts and Zeum.
at Monday, August 23, 2010 No comments:
Email ThisBlogThis!Share to TwitterShare to FacebookShare to Pinterest
Labels: California Historical Society, Education


Though still a work in progress, the project should be completed by the end of 2010.  The California Ephemera Project (CEP) provides access to the finding aids of ephemera collections at California institutions. The ephemera collections span from 1850 to the present, and contain advertisements, announcements, brochures, catalogs, menus, pamphlets, billheads, theater programs, clippings, bylaws, flyers, tickets, travel guides, and more.

Collections represent California businesses, associations, schools, institutions, and clubs; events ranging from world's fairs and earthquakes to parades and protests; buildings and structures, including the construction of Bay Area bridges; and extensive biographical files on both well-known and little-known Californians.

Funded by a Cataloging Hidden Special Collections and Archives grant awarded by the Council on Library and Information Resources (CLIR) to process and describe their ephemera in 2009-2010, the initial partners on the California Ephemera Project include the California Historical Society; the Gay, Lesbian, Bisexual, Transgender Historical Society; the San Francisco Public Library; and the Society of California Pioneers, all located in San Francisco.

The California Ephemera Project also has a great blog: http://36pagesorless.wordpress.com/ which has been tracking the progress of the project.
at Monday, August 16, 2010 No comments:
Email ThisBlogThis!Share to TwitterShare to FacebookShare to Pinterest
Labels: California, California Historical Society, Collections, History

Our first CHS Tale of Two Cities bus trip will be two cities which frame the Carquinez Strait. In the morning we will drive around and walkabout Benicia, laid out by City Surveyor Jasper O’Farrell to be the metropolis of the West, due to its strategic location between the Great Valley and the Bay Area. Our third of four American-period capitals, Benicia is full of great architecture and many stories of early California. We will have our lunch here, there are many restaurants to choose from.  Then we will cross to the south side of the Strait to visit Martinez by bus and by (easy) walking. Here we will find a very healthy downtown area, complimented by the Contra Costa County Courthouses and a thriving stream habitat, complete with beavers! And we’ll find the birthplace of Joe Dimaggio, and the longtime home of John Muir.
at Thursday, August 05, 2010 No comments:
Email ThisBlogThis!Share to TwitterShare to FacebookShare to Pinterest
Labels: California, Events, History

California is suffering a constitutional crisis, a fundamental breakdown not only of its ability to pass annual budgets but to provide basic public services and provide ultimately for the public good. Join R. Jeffrey Lustig, editor of the newly released Remaking California, and selected contributors from the book, for a discussion on the state’s politics from the roots of the crisis to proposals for constitutional reform. How will you rebuild the world—the schools, parks, forests, the libraries and museums—our children will inherit? This program was developed in collaboration with Heyday Books.