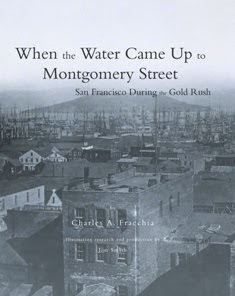 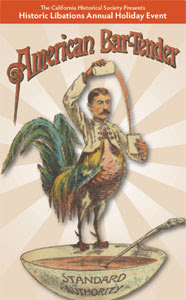 Join us in celebrating the season with our featured historic cocktails, including the Boothby cocktail, Martinez cocktail, Gibson cocktail and Pisco Sour, or partake in other uniquely San Franciscan libations.

All attendees will receive their very own copy of Cocktail Boothby’s American Bartender, the New Anchor Distilling Edition.$40 per member / $50 per nonmember(Hors d’oeuvres and cocktails included)

Please reserve your tickets by phone at 415.357.1848, ext. 229
or online at http://www.californiahistoricalsocietystore.org/, click on the Event category on the left hand side.

Join us in the excitment over CHS's Think California exhibition by sharing YOUR thoughts about California on our facebook discussion board. Your ideas help us develop future programs, exhibitions and website topics.

Visit our facebook page to join in the discussion!

The California Historical Society presents Think California, an exhibition highlighting the colorful history of California through the institution’s remarkable collection of artwork, artifacts, and ephemera. This ambitious exhibition asks the question “What do you think about when you think of California?” Here you see both common and little known facts of the Golden State’s fascinating history, as well as the myths and realities that are the lore of California.