I came across this wonderful photograph of the Butchers’ Union Drum Corps, circa 1910, in the San Francisco – Labor photograph files while collecting materials to reproduce for the Labor Archives and ’s 25th Anniversary Celebration on May Day: 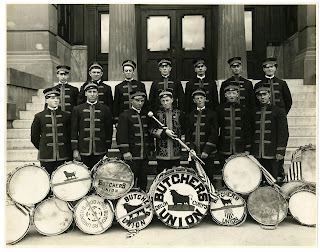 The energy working people invested in the production, rather than the consumption, of culture in the Progressive Era continues to surprise and impress this modern worker.

The California Historical Society recently acquired a set of photo albums documenting transit coming into the Parkside neighborhood of San Francisco. Join us for a show and tell about Parkside San Francisco. CHS staff members, Mary Morganti, Director of Library & Archives, and Eileen Keremitsis, Reference Staff and award winning historian, will talk about this recent acquisition to the collection. The evening will feature Woody LaBounty, founder of the Western Neighborhoods Project and author of Carville-by-the-Sea, San Francisco’s Streetcar Suburb, sharing some of the unique history of Parkside San Francisco. Space is limited. Please RSVP to 415.357.1848, ext. 229 or kjacobson@calhist.org

The native Miwok people lived along the gentle shores of Corte Madera Bay, in small villages. The Spanish divided the area into large ranchos of several thousand acres each, and began timber cutting and harvesting operations. Rancho Corte Madera was created to provide cut lumber for the mission and presidio of San Francisco. Corte Madera is Spanish for “cut wood.” Larkspur was established by a developer in the late 1800s, and mistakenly named by his wife who mistook the abundant lupine for larkspur. The town still retains much of its century-old heritage architecturally, and we’ll walk the downtown streets, and break for lunch here, at one of the many fine cafes and restaurants. Our walk will include the famous setting of some thirty years ago for the classic saying: “I want it all now,” as well as the site of famous dance and orchestra destination of the 1930s and 1940s, the Rose Bowl. On our Corte Madera portion, we will do some limited walking, and then drive around to see the two shopping centers which dominate the town’s landscape, as well as some diverse residential neighborhoods, many built of landfill over the decades. There are some minor uphill portions in Larkspur, but no stairs. 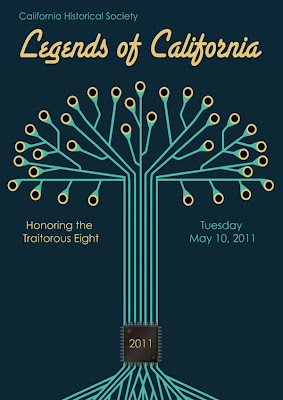 In 1957, eight brilliant men on the San Francisco Peninsula left the employment of Nobel Laureate William Shockley to found Fairchild Semiconductor. Over the next three decades, individually and together, they went on to found dozens of other companies, including Intel, Teledyne and Kleiner Perkins, to name a few. Their efforts spawned new industries, invented a global economy, and revolutionized the way that we live and work. In name they were Julius Blank, Gordon Moore, Jay Last, Sheldon Roberts, Victor Grinich, Jean Hoerni, Eugene Kleiner, and Robert Noyce. In legend, they became known as The Traitorous Eight.
Join us in honoring these Legends of California and supporting the work of the California Historical Society. First presented to legendary California musician and humanitarian Carlos Santana in 2009, Legends of California honors those people who have envisioned, inspired, and forged the future of California, the nation, and the world. This year, we honor the Traitorous Eight, those singular visionaries who together first birthed and then nurtured the legendary technologies, new industries, dynamic economic engine, and spirited entrepreneurial culture that is now known as Silicon Valley—another California Legend.
Buy Tickets online at Brown Paper Tickets
For more information or to purchase tickets please contact Angela Carrier 415-357-1848 x 215

The California Historical Society presents an evening with Eadweard Muybridge: Extensions, an opportunity to view selected photographs by one of the great pioneers of photography. Presented in tandem with neighboring SFMOMA’s current exhibit Helios: Eadweard Muybridge in a Time of Change, in which several photographs from the California Historical Society’s collection are on display, which offer a unique opportunity to experience Muybridge’s photographs. The selected photographs reveal Muybridge’s monumental role in capturing moments of history and the allure of California’s urban and natural landscapes. For this special evening, guests have the opportunity to stroll through the intimate selection and enjoy light refreshments. Noted California historian and bibliographer, Gary Kurutz, will offer comments on Muybridge’s life and work documenting California. 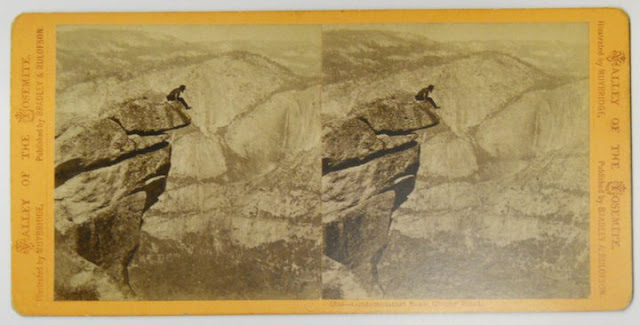