On November 21st, the San Francisco Opera presented the world premiere of Girls of the Golden West, by composer John Adams and director and librettist Peter Sellars. (The opera runs through December 10th.) Sellars’ libretto was inspired by primary sources, including the celebrated Gold Rush letters of Louise Clappe, which were published in 1854-55 under the pseudonym Dame Shirley. To many, the Shirley letters represent the pinnacle of Gold Rush literature.

Sadly, there is no known photograph of Dame Shirley extant. The California Historical Society Collection, however, includes stunning daguerreotype photographs documenting the cities, towns, and people of the California Gold Rush. Reproductions of some of these photographs are now on exhibit at the Opera House lobby—along with artifacts from the Collections of Levi Stauss & Co., the Museum of Performance + Design, and the Society of California Pioneers—through December 10th. Selections are presented below.


Pictured in this exquisite tinted daguerreotype is a young Rosalía Vallejo de Leese, sister of Mariano Guadalupe Vallejo. Rosalía married the American trader Jacob Leese in 1837, making her one of the earliest non-Native residents of the pueblo of Yerba Buena, now San Francisco. Like many Native and Californio women, Rosalia lived through a period of traumatic change, beginning with the California Gold Rush. Leese later deserted Rosalía and her children, and, in an 1874 interview, Rosalía expressed her unrelenting hatred for the Anglo American intruders who first humiliated her family during the Bear Flag Revolt of 1846.

The invention of the daguerreotype was announced in Paris in 1839, only nine years before the discovery of gold at Sutter’s Mill. This new photographic process—which enjoyed a relatively short heyday between 1845 and 1860—coincided with the spectacular and disruptive boom that transformed San Francisco from a small Mexican pueblo into a modern metropolis.

Although photographers flocked to California during the Gold Rush, the California Historical Society’s seven-plate panorama is one of only six surviving daguerreotype panoramas of San Francisco. Standing on sand dunes now at the corner of First and Howard Streets, the unknown photographer captured a vivid urban tableau, from the clapboard houses of Happy Valley to the shipbuilding works at Rincon Point. A washerwoman can be spied in the fifth panel (shown above), sitting in the doorway of her shack as laundry flutters in the spring breeze.

This full-plate portrait of a group of Gold Rush miners is one of the most spectacular and moving daguerreotypes in the California Historical Society Collection. Nine miners, perhaps forming a company, pose together in various attitudes of affection, insouciance, and camaraderie. Four of the men proudly display the tools of their trade, a shovel, pick, sluice box, and claim.
This daguerreotype of a street scene in Diamond Springs captures the look and feel of a young Gold Rush town. In addition to the offices of the Advocate newspaper and Wells Fargo & Co., many charming details are visible, including a broadside for a theatrical performance by the Bateman children. Eleven figures paused to pose for the shot; only one (to the left, leaning against a post) failed to remove his hat.

Thanksgiving in Los Angeles and San Francisco 100 years ago

Thanksgiving in San Francisco 100 years ago, from SFGATE:

And historic menus from the California Historical Society collection:

http://digitallibrary.californiahistoricalsociety.org/object/2854
at Thursday, November 23, 2017 No comments:
Email ThisBlogThis!Share to TwitterShare to FacebookShare to Pinterest

#Onthisday in 1967, the first issue of Rolling Stone was published 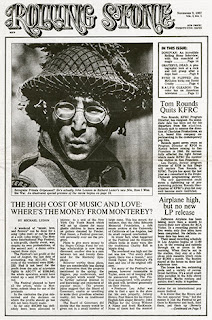 With a publication date of November 9, 1967, the first issue of Rolling Stone hit the streets of San Francisco and beyond exactly 50 years ago. The world of rock music and cultural journalism as well as the counterculture would never be the same after the publication of the first issue. Under the leadership of youthful editor Jann Wenner, and guidance from music critic Ralph Gleason, Rolling Stone would soon become a media force that would transform the music and media industries and help catalyze an American youth culture as a distinct and powerful cohort with its own mores, interests, language and priorities.

Published a month after the 'Summer of Love' unofficially ended in San Francisco's Haight-Ashbury neighborhood, Wenner's publication's bold mission stated that the publication was "not just about music, but also about the things and attitudes that the music embraces."  With offices in an industrial building in San Francisco's SoMa District, Rolling Stone would remain a California-based publication until Wenner moved the magazine's offices to New York in 1977.

Coinciding with the 50th Anniversary of the publication, a new biography on Wenner and documentary on Rolling Stone have focused attention on many aspects of the publication (and its editor) and its influence on American culture.  Of particular note, the new book on Wenner brings attention to the magazine's own history and how it was inspired by two California publications that get less attention than Wenner's magazine: Mojo Naviagtor R&R News, the West Coast's first rock and roll publication, and Ramparts, an aggressively political magazine published in Berkeley. 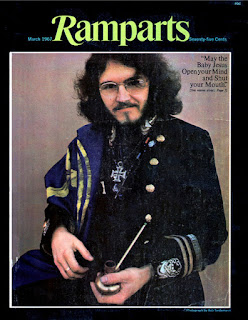 The debate on the legacy of Rolling Stone will surely continue on in the weeks, months and years to come, especially since the publication has been put up for sale.  What is undeniable is that the publication brilliantly captured a particular moment in California culture and history, and its distribution helped shape American popular culture starting in the late 1960s and 1970s. In some ways, it remains one of the most influential California exports over the past 50 years, and stands as yet another example of the Golden State's transformative influence on the culture of the United States.

Who Tells Your Story: Native American Heritage Month at CHS

Yesterday was the start of Native American Heritage Month, an annual time to honor Native culture and history in California and the country.  The California Historical Society's current exhibition, Meanwhile Out West: Colonizing California, 1769–1821 (one of two exhibitions at CHS's San Francisco headquarters) looks, in part, at the fate of California Indians under Spanish rule.

Two programs this month will explore these issues further. Click the program titles to learn more and reserve tickets!

Join the California Historical Society (CHS) and Heyday Books for a night of indigenous storytelling that explores how California’s history has been told for generations. Our speakers are Greg Sarris, Chairman of the Federated Indians of Graton Rancheria and author of the new book, How a Mountain was Made, and William Bauer, professor of American Indian Studies at University of Nevada, Las Vegas and author of California Through Native Eyes: Reclaiming History. The event will close with a short performance from Word for Word Performance Company, who will be performing one of the creation stories from Chairman Sarris’ new book.


Join the California Historical Society for a night that explores the darkest parts of California's history from 1760-1860 relating to California's native population. Hear from three authors (Benjamin Madley, Michelle Lorimer, Andres Resendez as they present on topics including the Mission era, Indian slavery and genocide, and then participate in a q&a session. Books by all three authors will be sold. 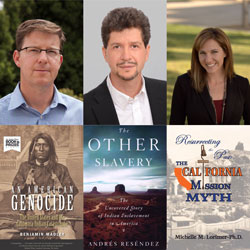 Please join us for both events!