The California Preservation Program (CPP) is the winner of the George Cunha and Susan Swartzburg Award for Collaborative Preservation. The CPP was selected out of a pool of several worthy nominees.

What began as a collaboration among a few preservation librarians in the University of California system has expanded into a strong network of individuals and small, medium and large libraries, museums, archives, historical societies, records repositories and other cultural organizations all around the state. The CPP works together to enhance disaster preparedness services, develop collection assessment tools, provide digital preservation education, create a statewide audiovisual preservation program, and integrate services with regional and national preservation programs.

As one of the nominators of the award wrote, “the California Preservation Program has defined collaborative statewide preservation in this decade.” The Award Committee agrees and is delighted to select them as the winners of the 2011 LBI George Cunha and Susan Swartzburg Award.

The Award includes a $1250 award donated by the Library Binding Institute and a citation and will be presented at the ALCTS Awards Ceremony at the ALA Annual Conference in June.

On View at the Hearst Art Gallery: Lee and Grant

150 Year after the start of the Civil War, the National Endowment for the Humanities, Mid-America Arts Alliance and the Virginia Historical Society have organized "Lee and Grant" -- A multi-media history exhibition that tells the history of the war through the biographies of the two Generals.  The exhibition is packed with documents, period photographs, maps, engravings, uniforms, original objects owned and carried by Lee and Grant, flags, swords, bayonets, Harpers' Magazine illustrations by Winslow Homer and Thomas Nast, tents, an extensive study table of books, bibliographies, films, ipods, a handout on California's Civil War history and more....

Divided in sections, the exhibition's content includes units on the Mexican War (1846-48), Grant's ascent in the West, Lee's in the East, Vicksburg, Cold Harbor, Slavery, Surrender at Appomattox, Emancipation, Reconciliation. Partner programs are being offered by the Contra Costa Libraries, the National Civil War Association, and the California Horse Artillery Society.

A lecture by Civil War history scholar, author and professor Carl Guarneri, Ph.D., "'Only a Question of Time and Patience': An Inside View of Grant's Campaign against Lee," will highlight opening day programs at 2 pm on Sunday, January 30, which also includes displays by members of the National Civil War Association in period uniforms and clothing.

The exhibition is on view through March 20, 2011 and is the only California venue for this nationally traveling exhibition.
For more info please visit:
http://www.hearstartgallery.org/
contact: Heidi Ehrman Donner 925.631.4069

Ephemera from the Saint Mary's College Archives is on view in the Library including original letters from soldiers and the diaries of a Union officer and Medal of Honor winner, period photographs, and a first edition of Grant's memoirs -


Wherever There's A Fight
AUTHORS ELAINE ELINSON AND STAN YOGI
TO SPEAK AT MANZANAR, FEBRUARY 19 AND 20

Authors Elaine Elinson and Stan Yogi’s will speak at the 2011 Day of Remembrance on Saturday, February 19 and Sunday, February 20 at 11:30 a.m. and 2:30 p.m. Elinson and Yogi's book, Wherever There’s a Fight; How Runaway Slaves, Suffragists, Immigrants, Strikers, and Poets Shaped Civil Liberties in California, won a Gold Medal in the 2010 California Book Awards. The authors give special focus to the World War II internment of Japanese Americans, foreshadowed by a century of civil liberties violations. They also explore contemporary issues including: dissent, racism, immigration, and the role of national security.

The annual Day of Remembrance observance commemorates the impact of President Franklin Roosevelt’s Executive Order 9066, which on February 19, 1942 authorized the forced removal of more than 110,000 Japanese Americans from their homes on the West Coast.

Elinson and Yogi will take the audience on a 40-minute illustrated virtual tour of civil liberties battles in California, from the Gold Rush to the present day, highlighting courageous individuals such as Fred Korematsu, who stood up for their rights and changed history.

Elaine Elinson was the communications director of the American Civil Liberties Union of Northern California and editor of the ACLU News for more than twenty years. She is the co-author of The Development Debacle: The World Bank in the Phillipines, which was banned by the Marcos regime. Her articles have been published in the San Francisco Chronicle, The Nation, Poets and Writers, and numerous other periodicals.

Stan Yogi has managed development programs for the ACLU of Northern California since 1997. He is the coeditor of two books, Highway 99: A Literary Journey through California's Great Central Valley and Asian American Literature: An Annotated Bibliography. His work has appeared in the San Francisco Chronicle, MELUS, Los Angeles Daily Journal, and several anthologies. Stan’s mother, Tokiko Kuniyoshi, was in the Manzanar High School Class of 1944.

The presentations, at 11:30 a.m. and 2:30 p.m. on both Saturday and Sunday, will include ample time for audience questions and book signing. The Manzanar National Historic Site Interpretive Center also features extensive exhibits, audio-visual programs, and a bookstore. Winter hours of operation are 9:00 a.m. to 4:30 p.m.

Manzanar is located at 5001 Hwy. 395, six miles south of Independence, California. Programs are free and open to the public. This event is made possible through cooperation with the Manzanar History Association (MHA). For event info contact Richard Potashin or Ted White (760) 878-2194 ext. 2712, 2717 or visit nps.gov/manz

I’ve just finished the final touches on the collection guide to the delightful Henry D. Cogswell Time Capsule Collection, a revised version of which will soon be available on the Online Archive of California. Cogswell, an eccentric San Francisco dentist with twin passions for dental education and teetotalism, assembled a large time capsule, which was entombed under the statue of Benjamin Franklin – now in Washington Square – in 1879. One hundred years later the capsule was opened and its contents given to the California Historical Society, as Cogswell himself had instructed.

In the universe of ephemera, the Cogswell Time Capsule Collection is the Land of Oz, with endless surprises and enchantments. The wealth of its printed contents – from cabinet cards to newspapers in German, Italian, French, Norwegian, and Chinese – testifies to the quality and diversity of print culture in late nineteenth-century San Francisco, as if in addendum to the large ephemera collections brought to light by the California Ephemera Project. Here is Cogswell’s business card: 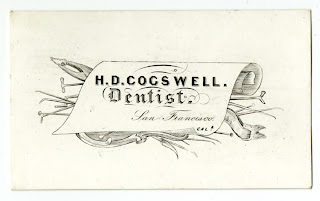 The delicacy with which the dental instruments are rendered – the pliers, in particular – only adds to their menace, at least to the dentophobic observer.

Some of the books in the collection include poignant personal inscriptions, messages to the future that bear the cultural and political weight of the past. In a copy of her 1877 book, The Great Geysers of California, Laura De Fore Gordon wrote: "If this little book should see the light after its hundred years of entombment, I would like its readers to know that the author was a lover of her own sex and devoted the best years of her life in striving for the Political, equal, and social and moral education of woman."
But, for me, the most wonderful surprise in the Cogswell time capsule comes at the very end, in the form of an 1879 letter documenting the history of the San Francisco China News, found in one of the last folders in the collection and transcribed in full here:

Enclosed – You will find a copy of the “San Francisco China News” dated February 6th, 1875.


The publication of the China News was commenced in June 1874 by the undersigned and John P. Bogardus. The China News was the first Newspaper in the Chinese language ever published outside of the Chinese Empire. The paper was published and issued by the originators for about one year and a half. No type was used, the matter being written on transfer paper and Litographed [sic]. As a matter of necessity the employees were all Chinese. It took the employees a year and a half to learn to Litograph [sic] and to purchase a press and import Litograph [sic] stones from Germany. When they got ready for business, they issued a paper of their own and not only refused to work any longer for Bogardus and Gordon but prevented other Chinamen from working for them. Since then the paper has been published by Chinese.

Accompanied by a copy of the newspaper, dated February 6, 1875, this letter documents perhaps the first Chinese American newspaper venture in California – and the United States – serving as an extraordinary example of Chinese American economic and cultural agency in a time (the 1870s) and place (San Francisco) defined by profound sinophobia. At the same time, it describes some of the technical problems faced by the pioneers of the Chinese-language press in America. Do these documents, buried for 100 years underground, represent a new chapter in California’s rich print culture history, yet to be written? 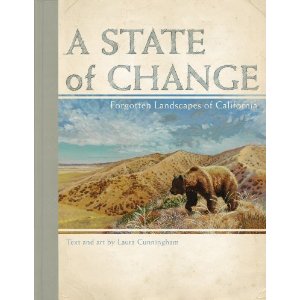 From scouting native plants in an parking lot to observing grizzly bears, Laura spent over two decades of biological, paleontological, and historical research to bring an all-but-forgotten world to life: as it was before European contact. We invite you to explore Old California with Laura through this slideshow and book signing event. With the clarity of a scientist and the passion of an artist, Laura will guide us through then-and-now images of landscapes.   Laura will share techniques to detect clues from ’s past, and reveal possibilities for both change and conservation in our present-day landscape.
The book will be available for purchase at the event, for more information on the book please visit heydaybooks.com.

Tonight! An Evening with the Ephemera Collection – Vintage Valentines and other Historic Tokens of Affection @ CHS 2/3/11

Love is in the air during February and historic tokens of affection will be on display at the California Historical Society for a special one-night event. Bring your sweetheart for a viewing of vintage Valentines alongside historic menus and trade cards from local purveyors. Indulge in sweet treats and wine while perusing the unusual collection of romantic and amusing mementos of love selected from the CHS’s permanent ephemera collection.


This event coincides with the launch of the California Ephemera Project which provides access to the finding aids of ephemera collections at California institutions. The ephemera collections span from 1850 to the present, and contain advertisements, announcements, brochures, catalogs, menus, pamphlets, billheads, theater programs, clippings, bylaws, flyers, tickets, travel guides, and more. Collections represent California businesses, associations, schools, institutions, and clubs; events ranging from world's fairs and earthquakes to parades and protests; buildings and structures, including the construction of Bay Area bridges; and extensive biographical files on both well-known and little-known Californians.

What: An Evening with the Ephemera Collection – featuring a display of Vintage Valentines and other Historic Tokens of Affection

Information about preservation workshops provided by the Institute of Museum and Library Services (IMLS)-funded Californians Connecting to Collections Project (C3) is now on the California Preservation Program website www.calpreservation.org/services/c3.html.

This multi-year, statewide preservation project provides information, education, and training to California heritage institutions. The first workshop series, "Protecting Cultural Collections: Disaster Prevention, Preparedness, Response & Recovery, " starts in February 2011 and over the next year will be held in 8 different locations throughout the State. A follow-up workshop series to test disaster plans will start later this year.