On May 27, 1937, the newly completed Golden Gate Bridge opened to pedestrian traffic. Vehicles began crossing the bridge the next day. Take a look at an opening day ticket as well as other fantastic pieces of Golden Gate Bridge Fiesta ephemera from the collection of the California Historical Society. 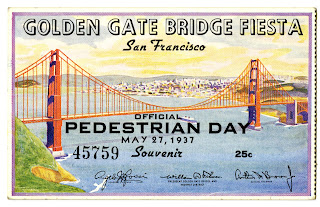 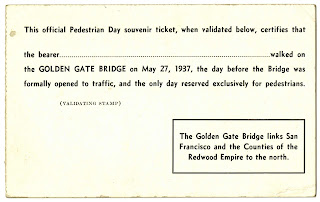 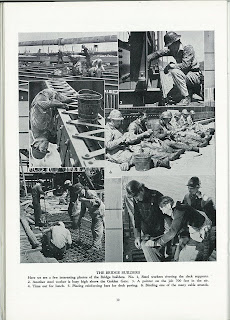 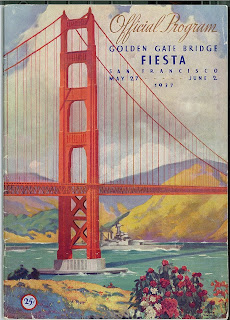 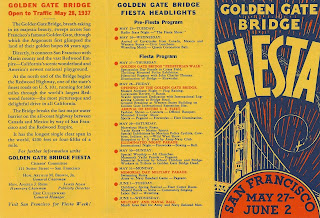 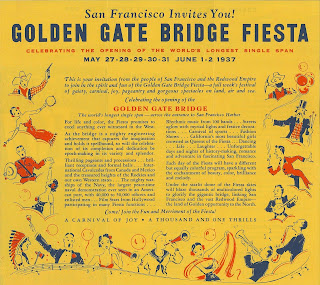 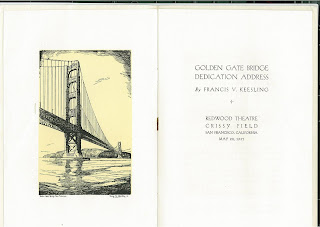 With the Giants taking on the Dodgers today, we're sharing baseball themed fruit labels from the collection of the California Historical Society. 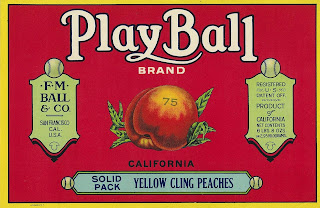 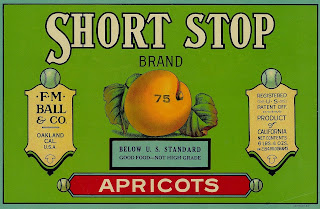 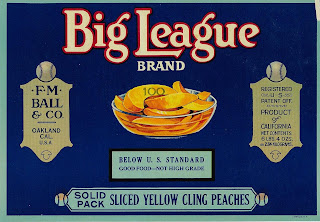 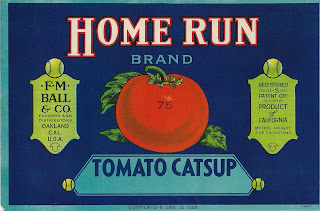 The Jonestown Memorial Foundation is dedicating a memorial at the burial site in an Oakland cemetery on Memorial Day. One family member of a person who died in Jonestown has been fighting the memorial for years, because it will include the name of Jim Jones among those who died. She is now before a local court seeking an injunction to stop the ceremony. The Jonestown Memorial Foundation asked that I send a note in support of the memorial that could be presented to the court. This is what I sent.

“The California Historical Society has the honor and responsibility to be the official, court-designated repository for the official records associated with Peoples Temple and Jonestown. We accept with gravity that weighty responsibility as a trustee of all of the complex relationships, overwhelming emotions, and competing interpretations of everything associated with Peoples Temple, and especially of the overpowering tragedy of Jonestown.

Every year, on the anniversary of the Jonestown tragedy, the California Historical Society sets aside a day where the descendents and family members of those who lost loved ones in Jonestown can grieve, heal, and renew. It is a powerful experience and a spiritual commitment that we accept in deep humility.

But, while this experience among the visual and documentary evidence of our memories is important and consoling, it is limited, personal, and private. A simple, elegant, and public memorial at Evergreen Cemetery not only is appropriate, but is demanded, in order to allow the broadest public and the most private individual to share together in the healing experience of memory. Of course there is hurt that will never be healed and anger that never will be assuaged. But the power of just simply and publicly identifying all of those who lost their lives—all of them—in this tragedy perhaps is the only chance of ultimate closure.

To anyone who considers this memorial inappropriate, I urge you to think of the power of the Vietnam Memorial in Washington, D.C. The officers who died while misleading American troops, officials, and citizens over the nature of the war are still listed on the wall. No name on that wall has had to pass a litmus test of purity or intent. They all died together. And today they are all remembered together. We have no more right to exclude from our community memory those who (perhaps correctly) we now judge harshly than we have to exclude George Washington or Benjamin Franklin or Thomas Jefferson from the national parchment because they owned slaves.

We cannot ask of history that it be fair or balanced or positive or expulitory. Indeed, it may explain nothing more than the heroic vanity of the human spirit. History is nothing more than one of many potential futures that could have happened—but this one did. It may not be the future—or the past—that you or I would have wanted, or even that the participants who created it intended. But it is the past all the same. Just because a particular event, a particular history, is not what we would have intended, because it hurts, because it is unresolved, is all the more reason to remember. We honor those who had their own dreams and strove to fulfill them, like those in Jonestown, by remembering them. We honor the people who suffered unpredicted and inconceivable horror, like those in Jonestown, by remembering them. That is why this memorial is needed. Please support it.”

For more information on the Peoples Temple Collection at the California Historical Society, visit http://californiahistoricalsociety.blogspot.com/2010/09/chs-digitization-project-peoples-temple.html. 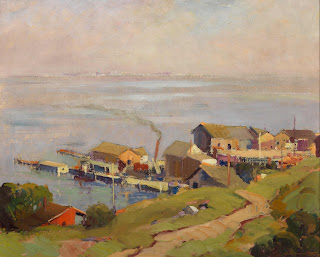 A Century of Landscapes: Selections from the California Art Club 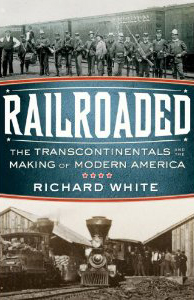 Myths about the Transcontinental Railroad and the Building of the American West
Wednesday, June 8, 2011 - 6:00 p.m.
The Commonwealth Club of California and the California Historical Society present:
Richard White, Professor of History, Stanford University; Author, Railroaded: The Transcontinentals and the Making of Modern America
In conversation with David Kennedy, Donald J. McLachlan Professor of History, Emeritus

Drawing on extensive knowledge on the American West and 12 years of research on the railroads, Richard White will reveal the social and economic impact the transcontinental railroad has had on shaping the United States into what it is today. With an iconoclastic perspective, White recasts our understanding of the Gilded Age. Hop aboard as White explores 19th-century politics, greed, corruption, money, and corporate arrogance – and the America formed out of them after the Civil War. For questions or to purchase tickets, please call 415.597.6705 or purchase online at the Commonwealth Club website. If you are a member of the California Historical Society, be sure to enter or mention the coupon code: historicalsocietyforwhite.
at Monday, May 16, 2011 2 comments:
Email ThisBlogThis!Share to TwitterShare to FacebookShare to Pinterest 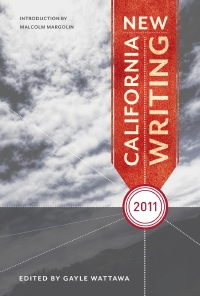 Heyday is proud to announce the release of the inaugural edition of a new annual series—New California Writing. This literary anthology collects fresh and thought-provoking writing about California that has been published in the previous year, with a special emphasis on Californian writers, publications, and publishers. Fast-fire readings by Katherine A. Bricetto, Jennifer Elise Foerster, Darla Hillard, Louis B. Jones, Andrew Lam, Joe Loya, Ruth Nolan, Rebeccas K. O'Connor, Jim Powell, Fred Serrerberg, and Tess Taylor. Space is limited. RSVP required by May 20 to kjacobson@calhist.org or 415.357.1848, ext. 229.
at Monday, May 16, 2011 No comments:
Email ThisBlogThis!Share to TwitterShare to FacebookShare to Pinterest

Here in our culturally rich South of Market neighborhood, May ushers in a season of Gertrude Stein, thanks to exhibits at two local museums, SFMOMA and the Contemporary Jewish Museum. To complement this abundance of Stein, we honor here Stein’s life partner, Alice B. Toklas – or rather the historic San Francisco Democratic Club named for her.

Get your own
Founded in 1971 - very early in the gay rights movement – the Alice B. Toklas Memorial Democratic Club sought to bridge the gap between statements of political goals and the achievement of those goals. Early members included Mayor (now Senator) Dianne Feinstein, former Mayor Willie Brown and current San Francisco Sheriff Mike Hennessey. The club, now known as the Alice B. Toklas LGBT Democratic Club, still thrives in San Francisco today. Thanks to the astute collecting acumen of CHS staff, and our recent California Ephemera Project, we’re able to share these tidbits of 1980s political life in San Francisco.

As for Alice herself, she outlived Gertrude, (d.1946), by over 20 years, but remains in her shadow yet today. Peer around the back of Gertrude Stein’s Paris headstone and there, in perpetuity, is where you’ll find Alice.
– Alison Moore, Reference Staff
at Wednesday, May 11, 2011 No comments:
Email ThisBlogThis!Share to TwitterShare to FacebookShare to Pinterest
Labels: California Historical Society, Collections, Exhibitions, History 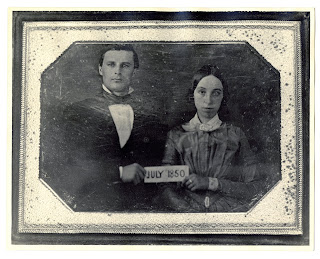 Wednesday, May 11, 2011, 5:30 p.m. to 7:00 p.m.
New England to Gold Rush California: The Journal of Alfred and Chastina W. Rix, 1849–1854
Book Launch with Lynn A. Bonfield
Free Event @ California Historical Society
On July 29, 1849, after an eight-year courtship, two young schoolteachers were married in a small town in northern Vermont. Their story could easily have been lost to history, except that Alfred and Chastina Rix had the foresight to begin recording their observations in a joint journal. Their unique husband-and-wife account, which captures the turbulence of life and events during the gold rush era, is also a personal—and compelling—chronicle of a singular family’s separation and reunion. Join us at the California Historical Society for the book launch with editor Lynn A. Bonfield. The California Historical Society will display the original journal of Alfred and Chastina W. Rix from the collection, as well as other pieces special to this exciting work.

Last year the California Historical Society received a small but special gift: 17 certificates of residence for Chinese laborers, dated between the years 1894 and 1897. The collection was donated to CHS in the name of the late Mr. Frank V. Piraro, who discovered the cache in his cousin’s shed in downtown San Jose.

Now a rich source of historical and genealogical significance, these certificates represented the codification of nineteenth-century sinophobia: under the provisions of the 1892 Geary Act, which amended the Chinese Exclusion Act of 1882, all Chinese and Chinese Americans in the United States were required to apply for, obtain, and carry a government-issued certificate of residence proving their legal presence in the United States. Any person of Chinese ethnicity discovered without such identification risked arrest and deportation. In other words, Chinese Americans were presumed guilty of an immigration offense – based solely on their ethnicity, as perceived by non-Chinese authorities – until proven innocent.

Each certificate includes the laborer’s name, local residence, and occupation; information about his height, eye color, complexion, and physical marks or peculiarities; and a photographic print. Reproduced here is the certificate for Ju Sing, contractor, age 34 years, of San Jose: 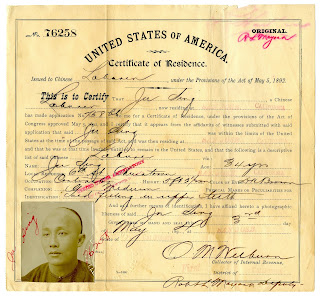 One hopes that these certificates will contribute to a greater understanding of the humanity, struggles, and contributions of Mr. Sing and other Chinese American workers in nineteenth-century California.
A complete inventory of the collection can be found on the Online Archive of California: http://www.oac.cdlib.org/findaid/ark:/13030/kt858038qp/