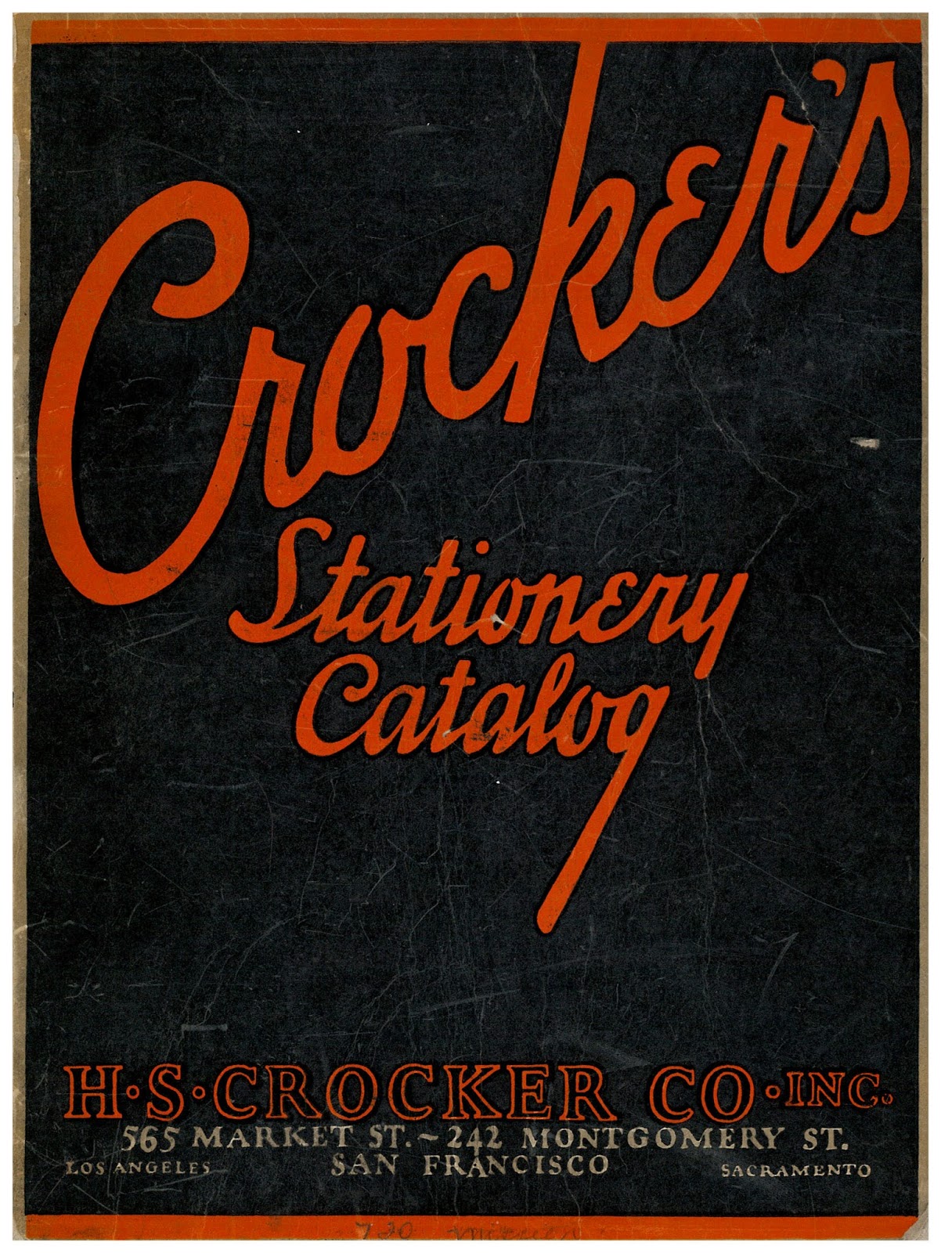 Type Tuesday has featured the work of a bevy of printers, typefoundries and their fonts. But us everyday admirers of type need to make our marks with style too, albeit without the cumbersome machinery, messy ink rollers and typesetting equipment that needs to be painstakingly arranged. Nothing to fret, Crocker's Stationery Catalog has got you covered!


Jaime Henderson
Archivist
at Tuesday, October 28, 2014 No comments:
Email ThisBlogThis!Share to TwitterShare to FacebookShare to Pinterest

What did Gold Rush miners eat? This 1851 bill of lading, recording goods shipped from New York to San Francisco, and from San Francisco to Sacramento City, gives some sense of the miners' culinary priorities: whiskey, brandy, cherry brandy, bitters, tobacco, butter, oysters, and pickles all made the long trip.

We have previously featured works by E.R. Weiss here at Type Tuesdays but in honor of his birthday on October 12 we, somewhat belatedly, feature some of Weiss' work for the Bauer Type Foundry. 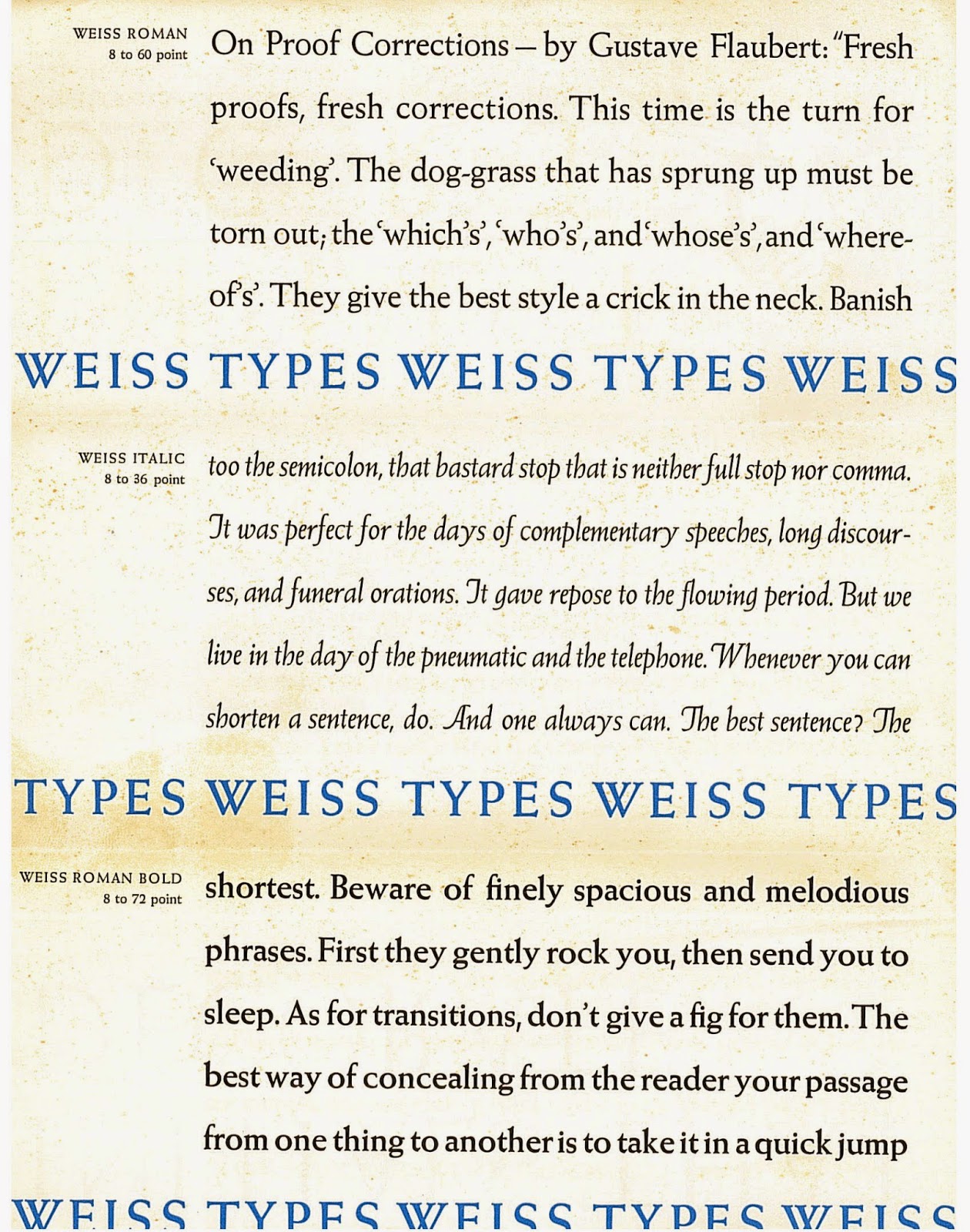 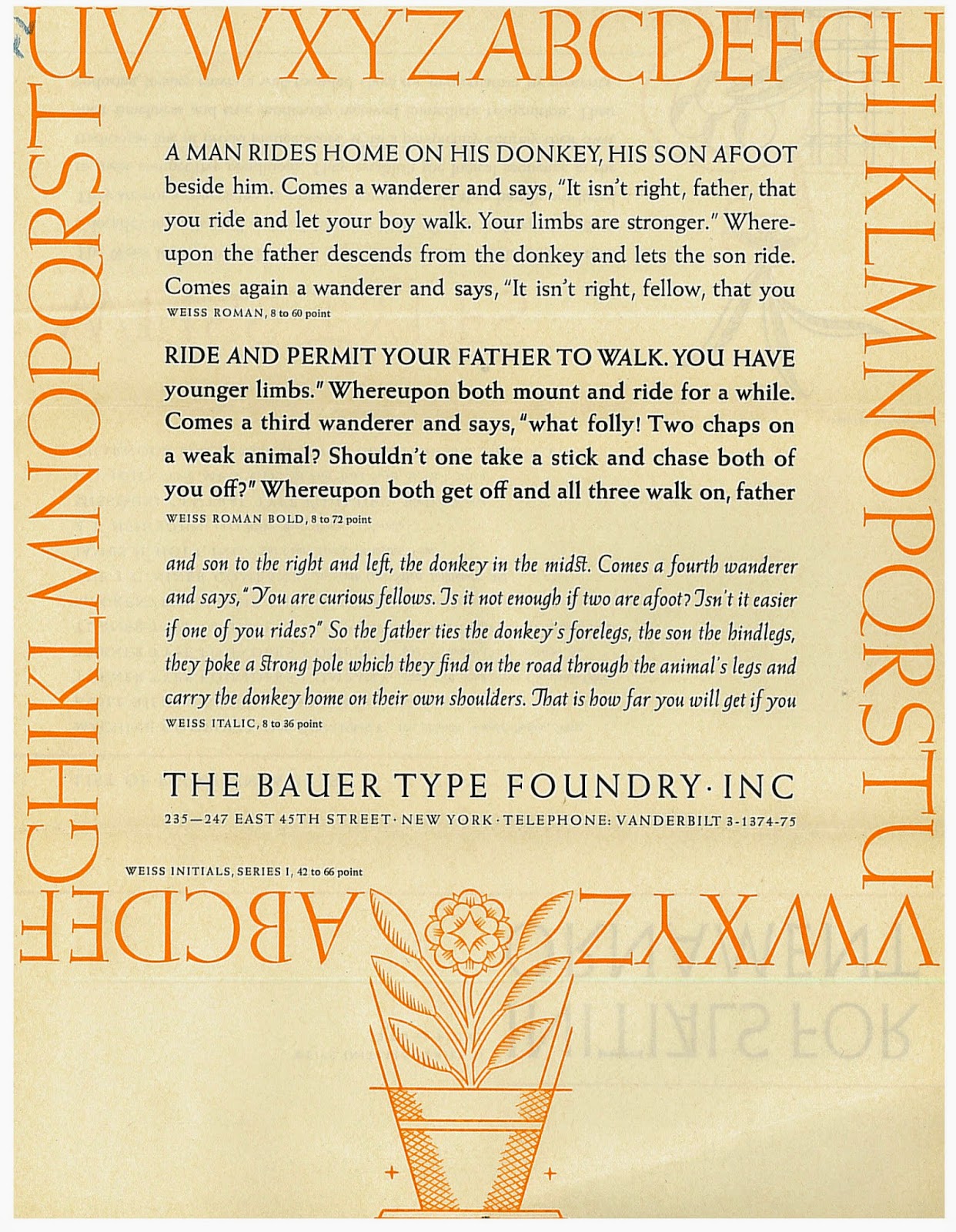 Jaime Henderson
Archivist
at Tuesday, October 14, 2014 No comments:
Email ThisBlogThis!Share to TwitterShare to FacebookShare to Pinterest

Working with nineteenth-century manuscripts gives one a new-found appreciation for the wonders of modern medicine and dentistry. Scared of getting a flu shot? Consider the plight of this poor 49er, his rotting tooth in the clutches of an untrained mountain dentist. At least they had whiskey.

Excuse me for trying your patience, for I want to tell you about an operation which I passed through a few days since. In the first place, imagine yourself seated on an old soup box, in what is termed a Doctor's Office, here in the mountains, and the Dentist so called, a very raw boned Pike Countryman with both hands full of the old fashioned instruments and singing out at the same time, open your mouth as wide as you can, then comes the tug of war. I tell you I have never passed through or experienced anything that gets me like it does to have a tooth extracted by a mountain Dentist, with the tools they use. I think the instruments if I may call them by that name, are better adapted to use in a mining claim, than on a person's tooth. 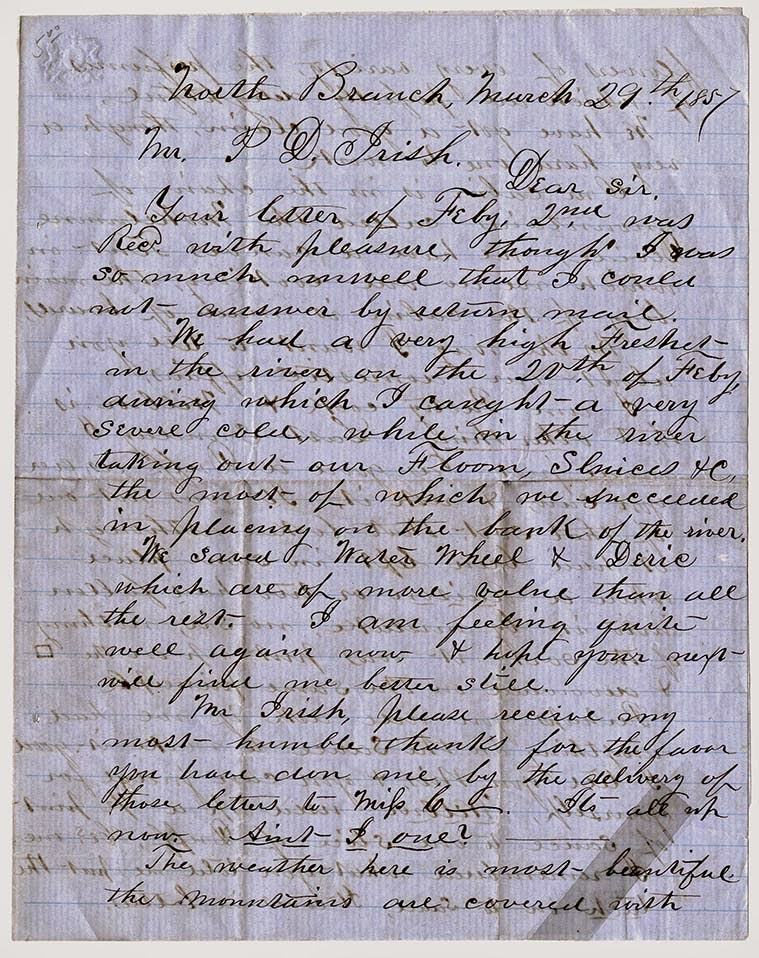 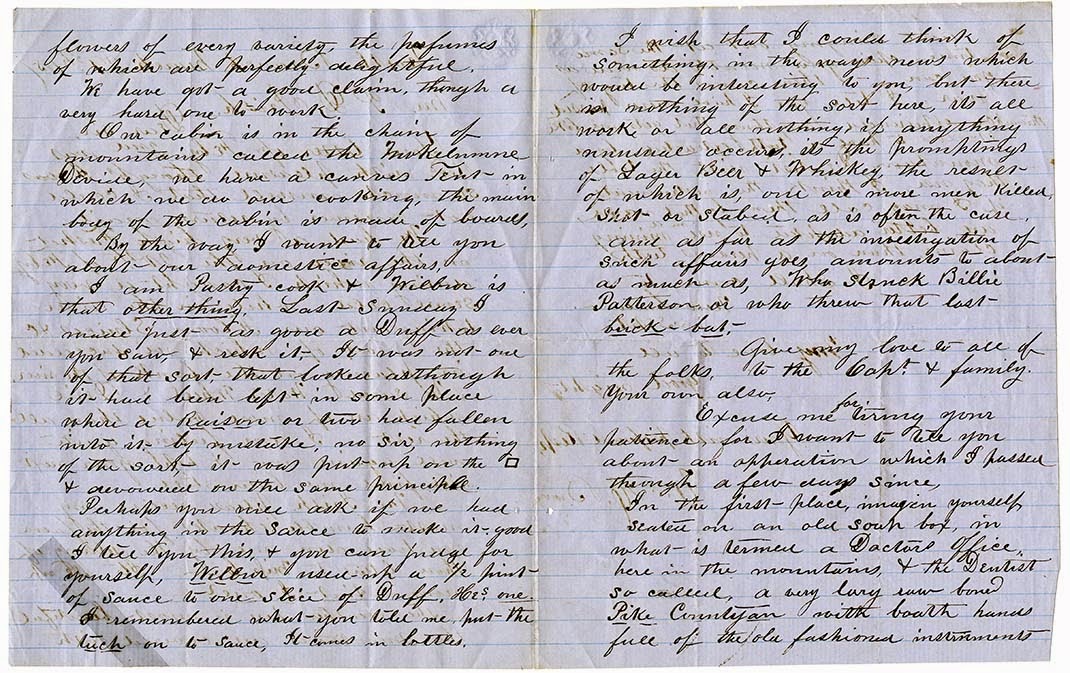 Offerings from Hazeltine Type, another local foundry that had been located in Oakland, California. 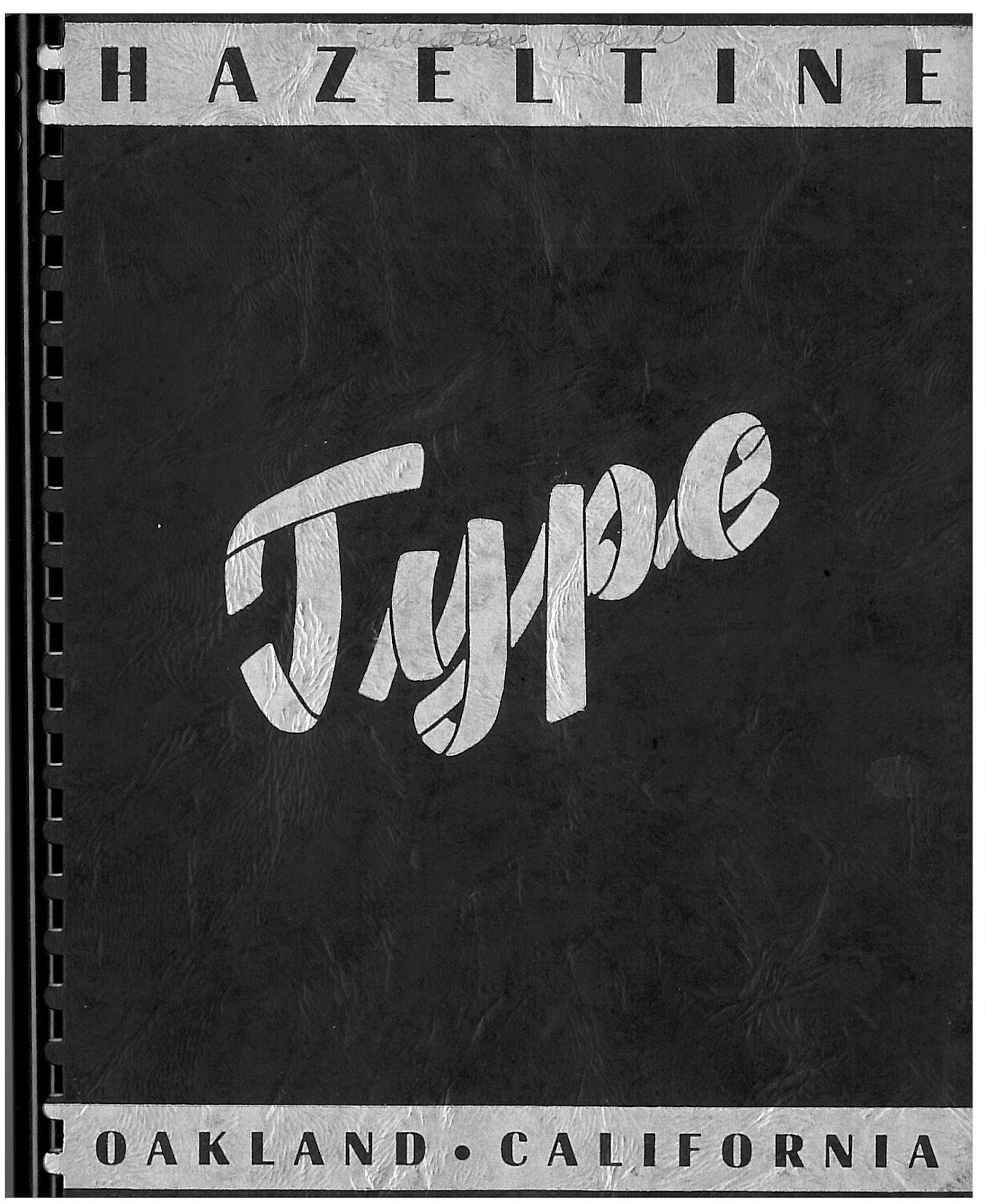 The type featured is from their Ludlow section - that is, a type produced on typesetting equipment manufactured by the Ludlow Typograph Company. Wanting to offer the public a cheaper alternative to Linotype, William I. Ludlow and William A. Reade created a hot metal typesetting system. 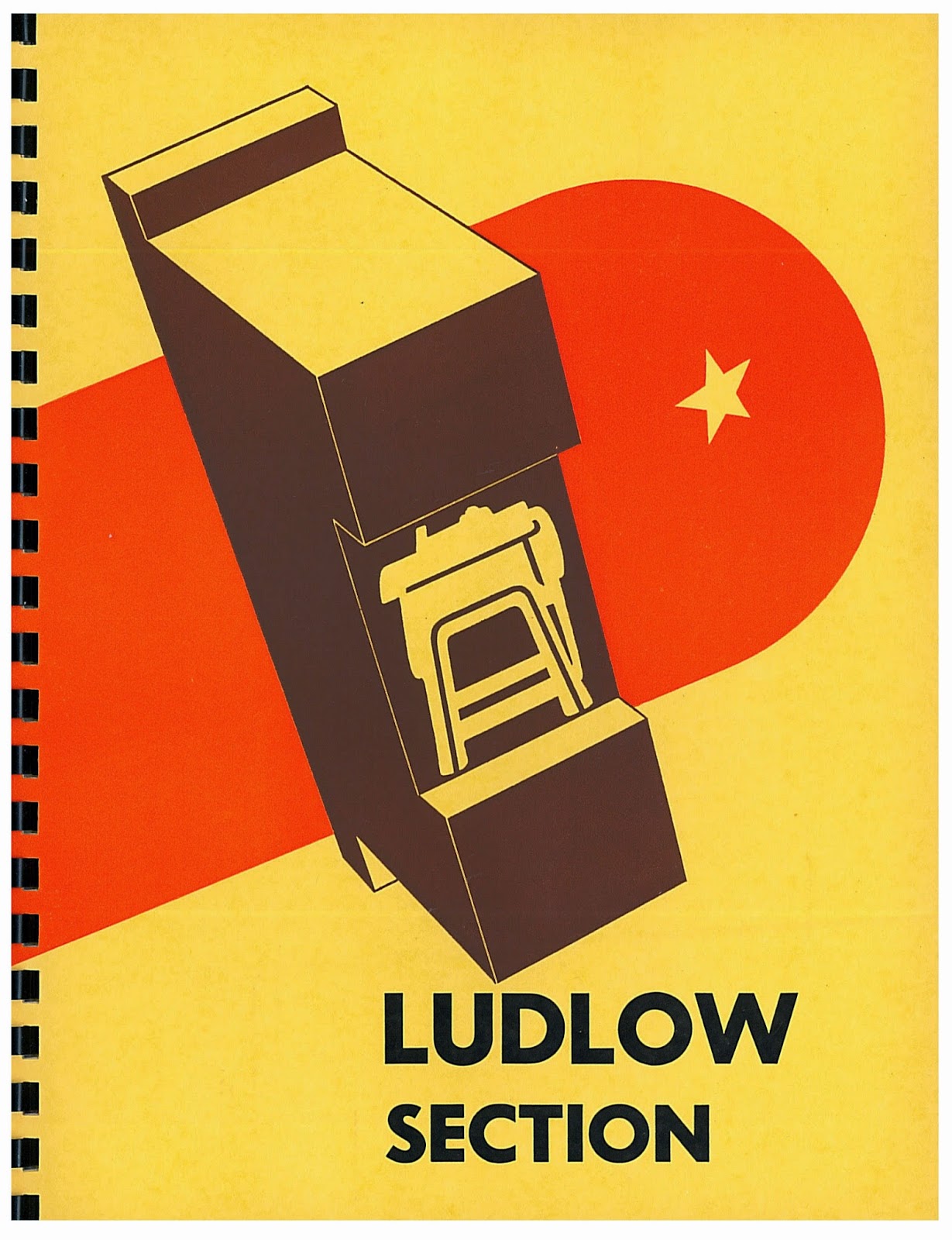 Wikipedia provides an excellent, simple explanation for how the equipment worked:

The Ludlow system uses molds, known as matrices or mats, which are hand-set into a special composing stick. Thus the composing process resembles that used in cold lead type printing. Once a line has been completed, the composing stick is inserted into the Ludlow machine, which clamps it firmly in place above the mold. Hot linecasting metal (the same alloy used in Linotype and Intertype machines) is then injected through the mold into the matrices, allowed to cool, and then the bottom of the slug is trimmed just before it is ejected. The operator then replaces the matrices, or mats, back into the typecase by hand. Since the mats are of a consistent height, irrespective of typeface size, they are easier to handle than lead type.
Windemere, Commerce Gothic and Hauser Script were three of the Ludlow types Hazeltine offered to its customers. 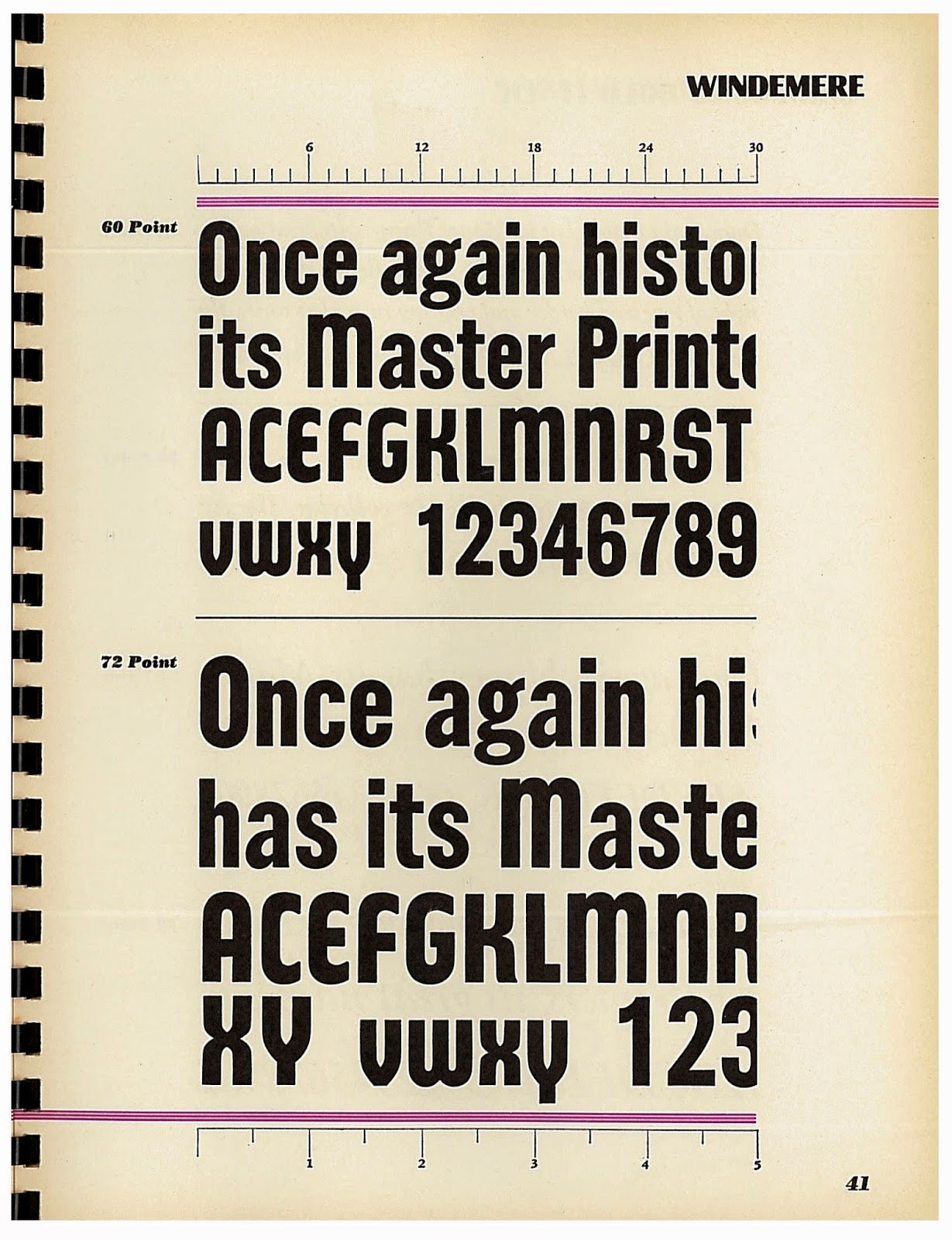 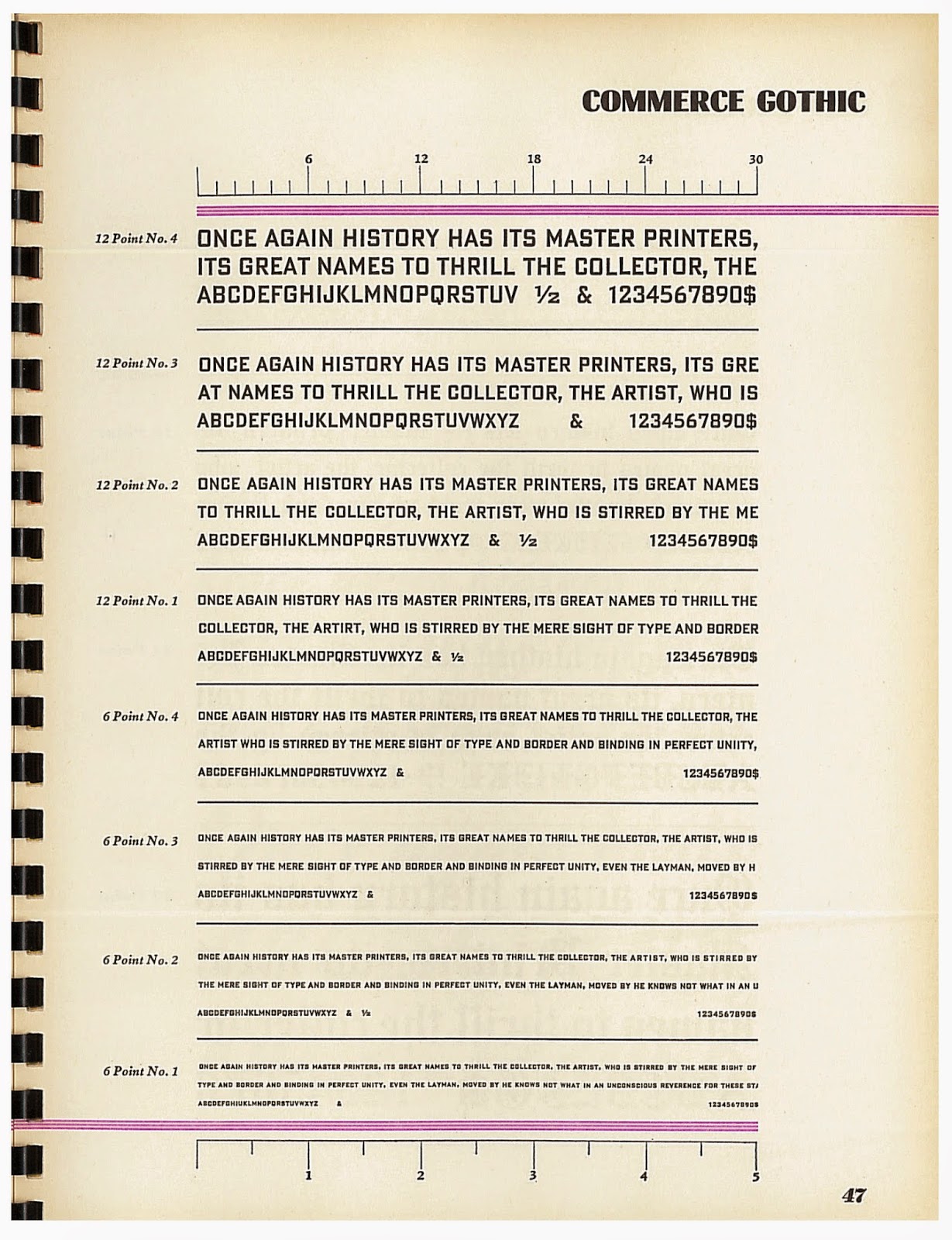 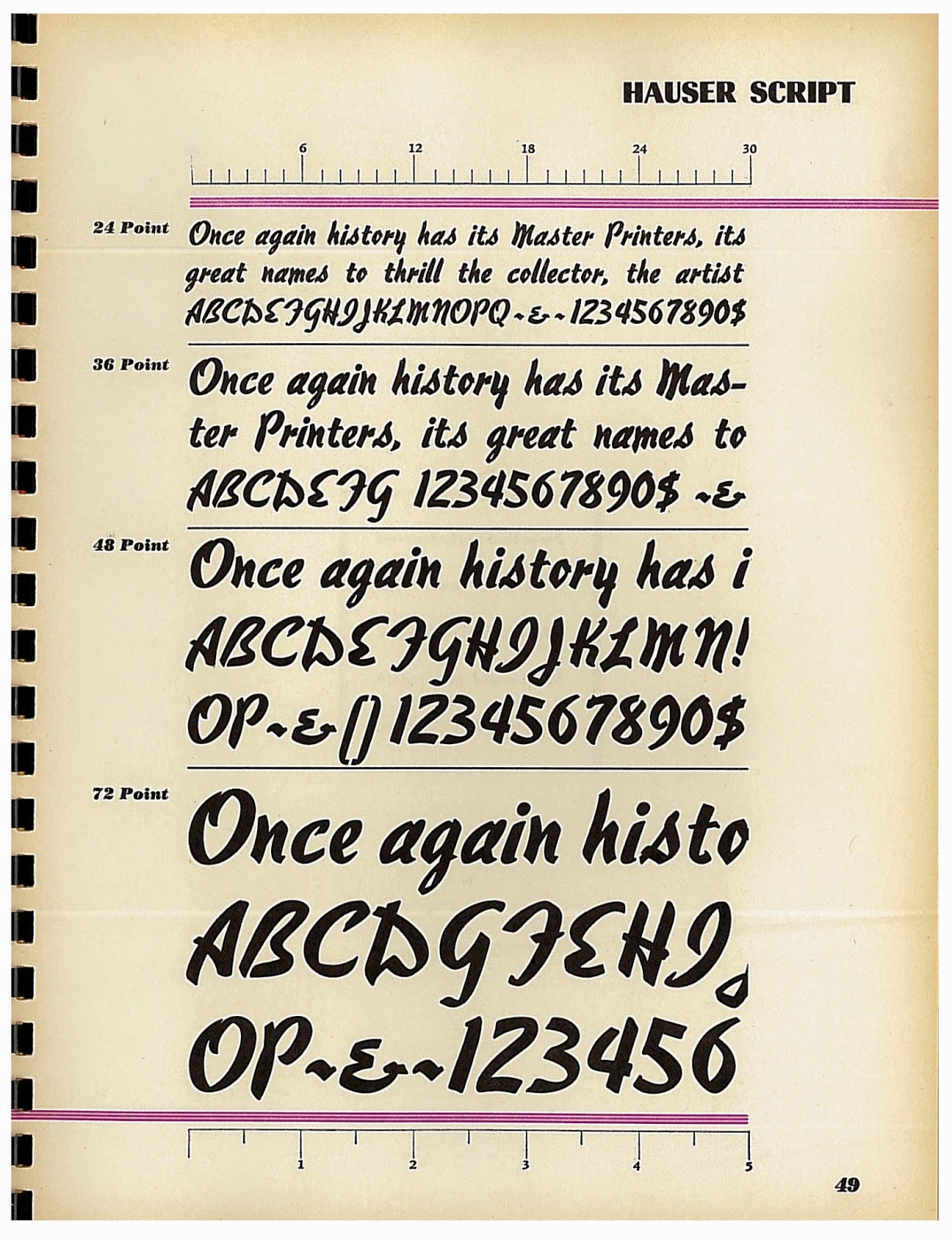 at Tuesday, October 07, 2014 No comments:
Email ThisBlogThis!Share to TwitterShare to FacebookShare to Pinterest

In the fall of 1964, on-campus political issues which had been brewing at UC Berkeley for at least four years converged with national events in ways which would forever change Berkeley and the nation.

Inspired by their participation in Mississippi’s Freedom Summer of 1964, Mario Savio and other Berkeley undergraduates sought to continue their civil rights activism on campus as the Fall semester began, by setting up tables and handing out literature near the entrance to the university and on Sproul Plaza, just off Telegraph Ave.

On Sept. 14, 1964, campus administrators banned political activity from UC property, sparking swift student protests. The most notable of the protests was a 32-hour standoff October 1, at a police car parked on the Plaza which held student Jack Weinberg, arrested for staffing a table on Sproul Plaza, and the historical mass arrest of over 700 students at Sproul Hall on December 4.

The term “Free Speech Movement” was coined early on in the protests, and would come to symbolize the beginning of an era of protests over free speech, civil rights and the war in Vietnam.

The accompanying undated note by Savio, part of CHS’ ACLU Northern California collection, was likely written during the fall of 1964, as university officials sought ways to prevent certain student organizations from holding rallies and distributing literature, and students sought paths around these new rules.

Manuscript Monday—Gold Rush correspondence, Part 3: “A woman, a woman, my kingdom for a woman”


Male Gold Rush correspondents expressed their loneliness particularly as a longing for women. In the letter of 1850 reproduced below, miner Oscar Bennet communicates his utterly undiscriminating desire for female society in near hysterical tones. Perhaps Mr. Bennet earned his correspondent’s sympathy, but I cannot help feeling sorry for the unlucky woman who may have stumbled into a quadrille with him at the overpriced gold country ball to which he refers.

Here I am, separated by a broad expanse of water and land from all near and dear friends. Yesterday was the dullest “New-Year’s” I ever spent, cut off from all female society. Milton, if you were separated from these dear little creatures as I am, you would know how to appreciate their value—if you were of the same mind that I am you would get married immediately. “A woman, a woman, my kingdom for a woman.” If nothing happens to blur my progress you may expect me home next fall—tell the girls to be ready—for married I must be as soon as I arrive.

Bennet begins to plead for a letter from home, using a tried-and-true combination of self-pity, shaming, and flattery (see last week’s post, Gold Rush correspondence—Part 2: The begging for a letter letter):

Milton, one long year has past and I have not received one letter from home. I have wrote often and received no answer, how is this can you account for it [?] I attach a small portion of blame to you—my letters have been directed to Rochester for Alonzo yourself and Wallace—not one of you have answered. I have received 5 newspapers from Alonzo. This is my last effort to gain an answer—if this letter don’t fetch one I will give up all hopes. Milton, you are more attentive—you have more regard for your kindred than the rest. Therefore I look to you for an answer. I hope you will not fail to comply with my request.

Bennet then returns to his first theme, which he helpfully underlines:

You have undoubtedly heard all about California before this and therefore it’s useless for me to go into the details. On the 8th of January I am going to attend a ball, given in commemoration of the battle of New Orleans. The committee are making every effort to obtain every woman in the country to attend it. Oh, what a time there will be—tickets for $100, supper extra. The sum of $100 to pay for a ticket to go to a Ball looks enormous in your eye, but here it’s not more than $5 at home. 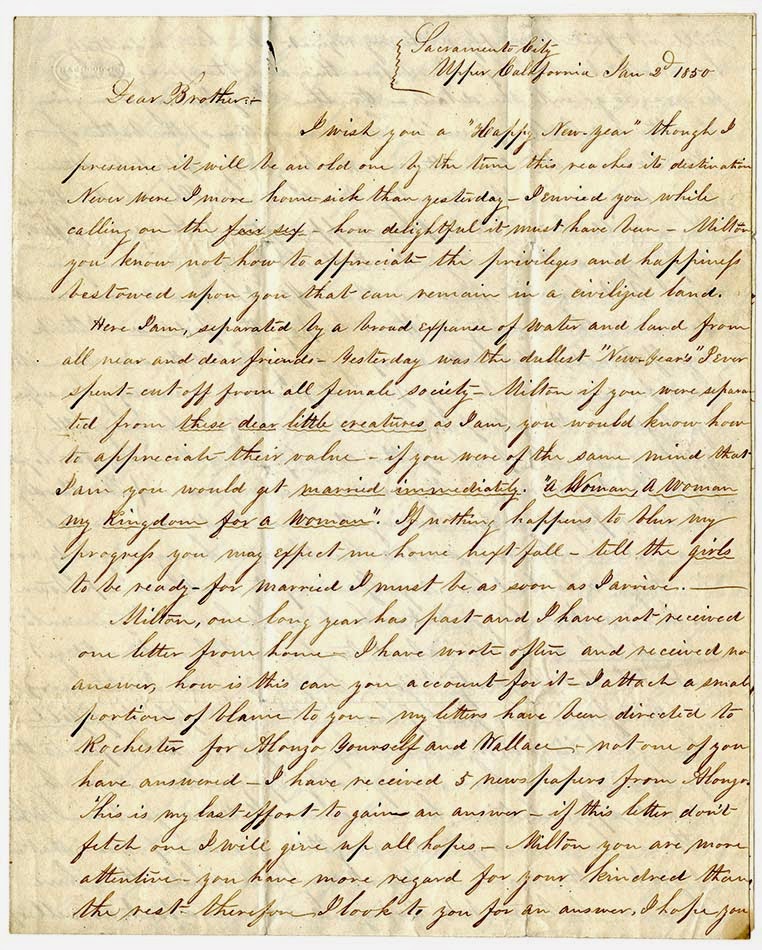 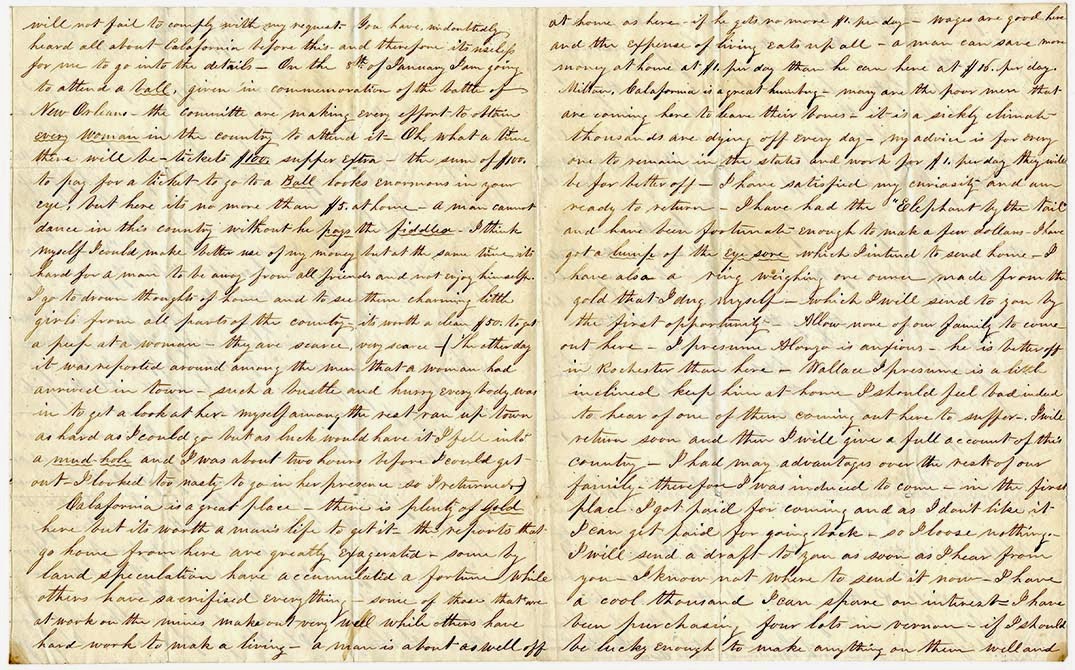