Making the world go 'round

In recognition of upcoming Labor Day, exhibited here are a few photographs from our collections showing women and men hard at work ironing linen, making soap, picking seeds, harvesting oysters, and making candy.  Included in these images from the 19th and 20th centuries are the exteriors of two San Francisco businesses in which the employees toil:  The Metropolitan Laundry and the Newell & Bro. New York Soap Company.

Wendy Welker
Archivist and Librarian
at Thursday, August 28, 2014 No comments:
Email ThisBlogThis!Share to TwitterShare to FacebookShare to Pinterest

In today's Type Tuesday we feature another example of one of the earlier type specimens in the Kemble Collection. This specimen, from 1822, for the letter foundry of James Ronaldson was published just one year before the Ronaldson's retirement from his long and illustrious career in the printing industry. 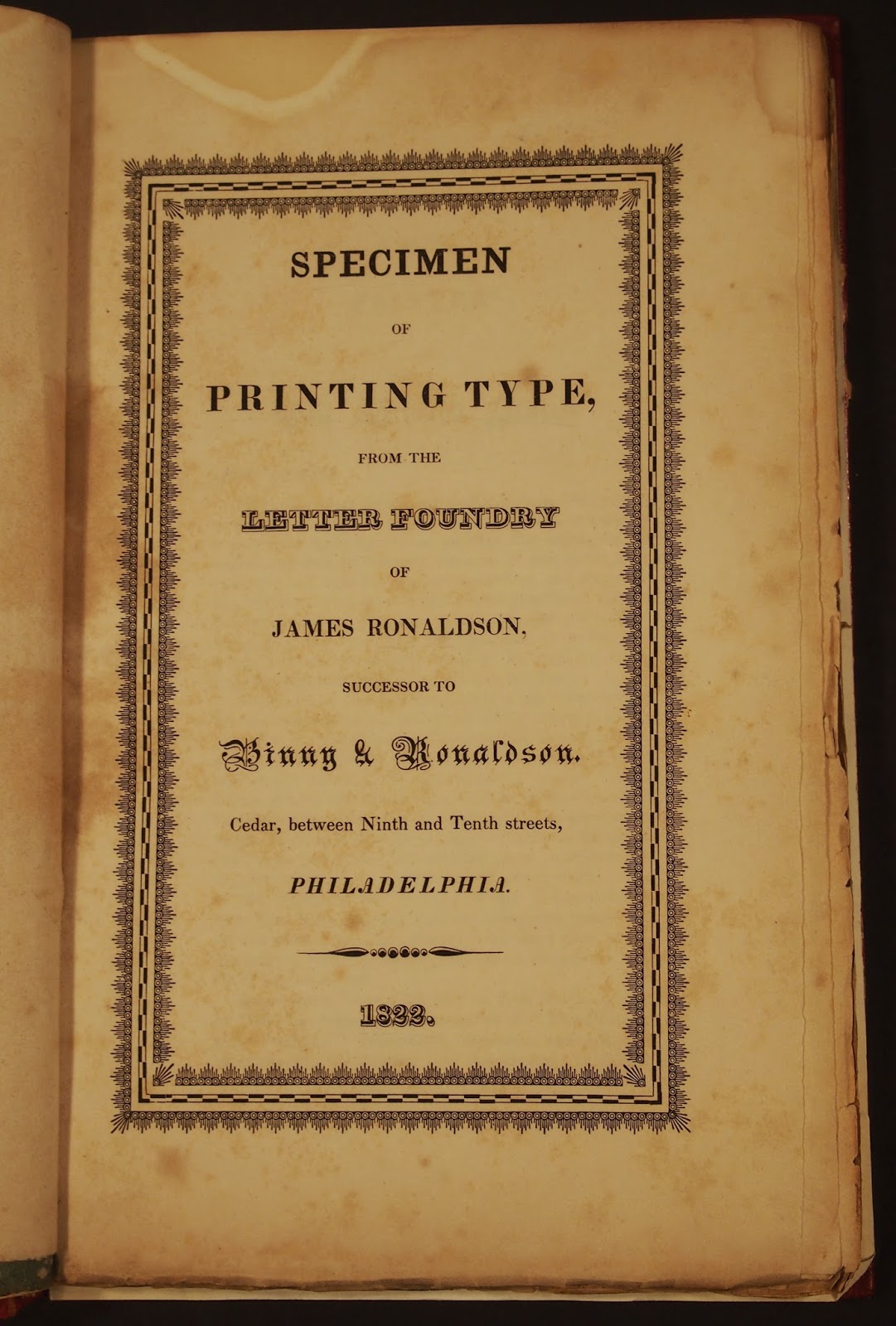 Ronaldson had began his professional life as a baker, but had lost his bakery to a fire. Upon meeting fellow Scotsman Archibald Binney in a Philadelphia ale house the two decided to partner up. Ronaldson's business smarts combined with Binney's knowledge of letter-cutting gave way to the first permanent type foundry in the United States. Founded in 1796 the firm of Binney & Ronaldson, outfitted with the same press that Benjamin Franklin had purchased from the French type foundry Fournier, quickly began to establish itself as an outstanding and influential foundry. One of their most significant contributions to print being the creation of the $ sign, which had previously been symbolized with an elongated 'S'.

Binney retired from the foundry in 1815, selling his shares to his partner Ronaldson. Ronaldson carried on with the foundry for eight more years, retiring in 1823 leaving the foundry to his brother, Richard.

Below are samples of print from James Ronaldson's foundry in 1822. 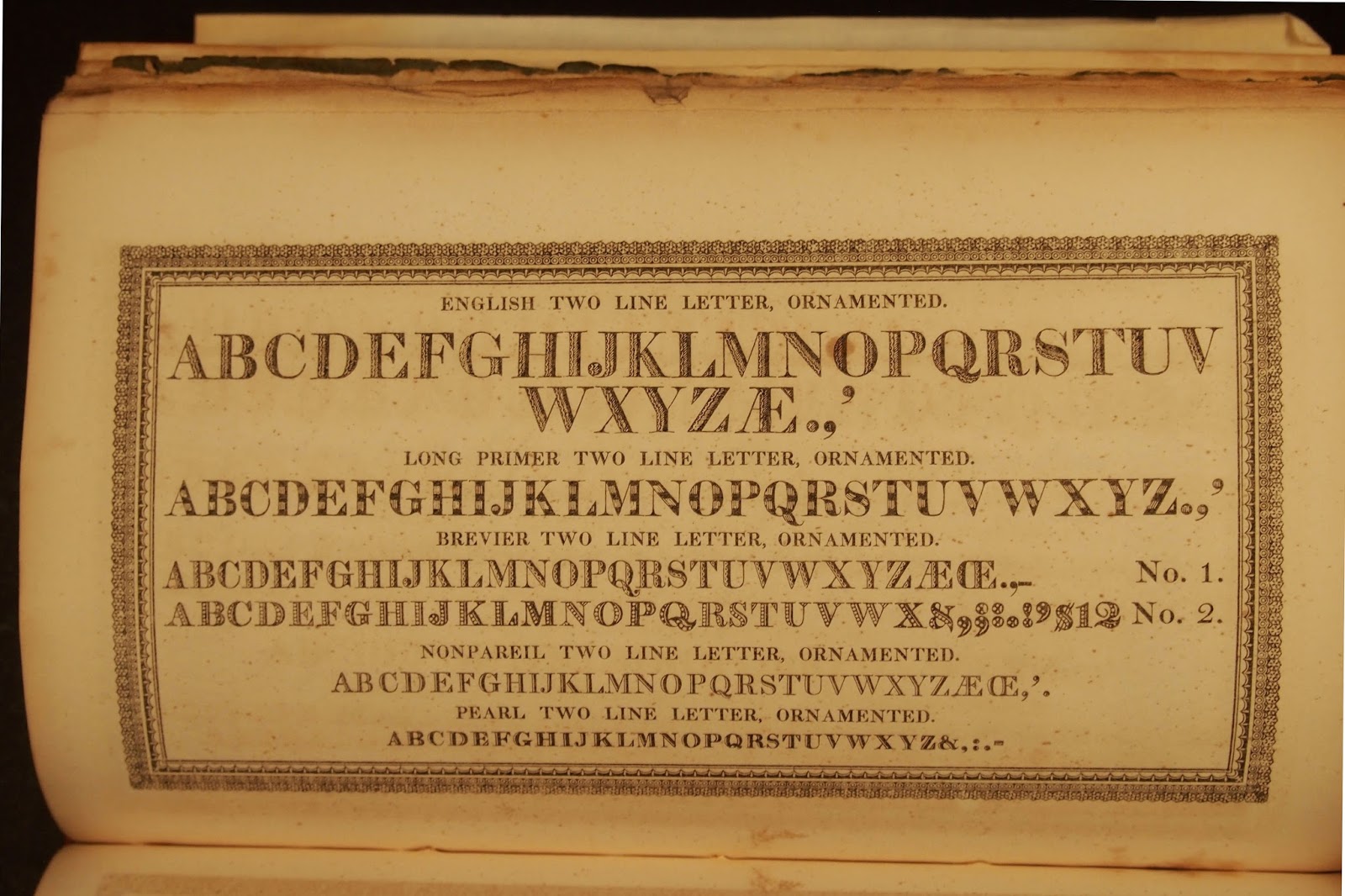 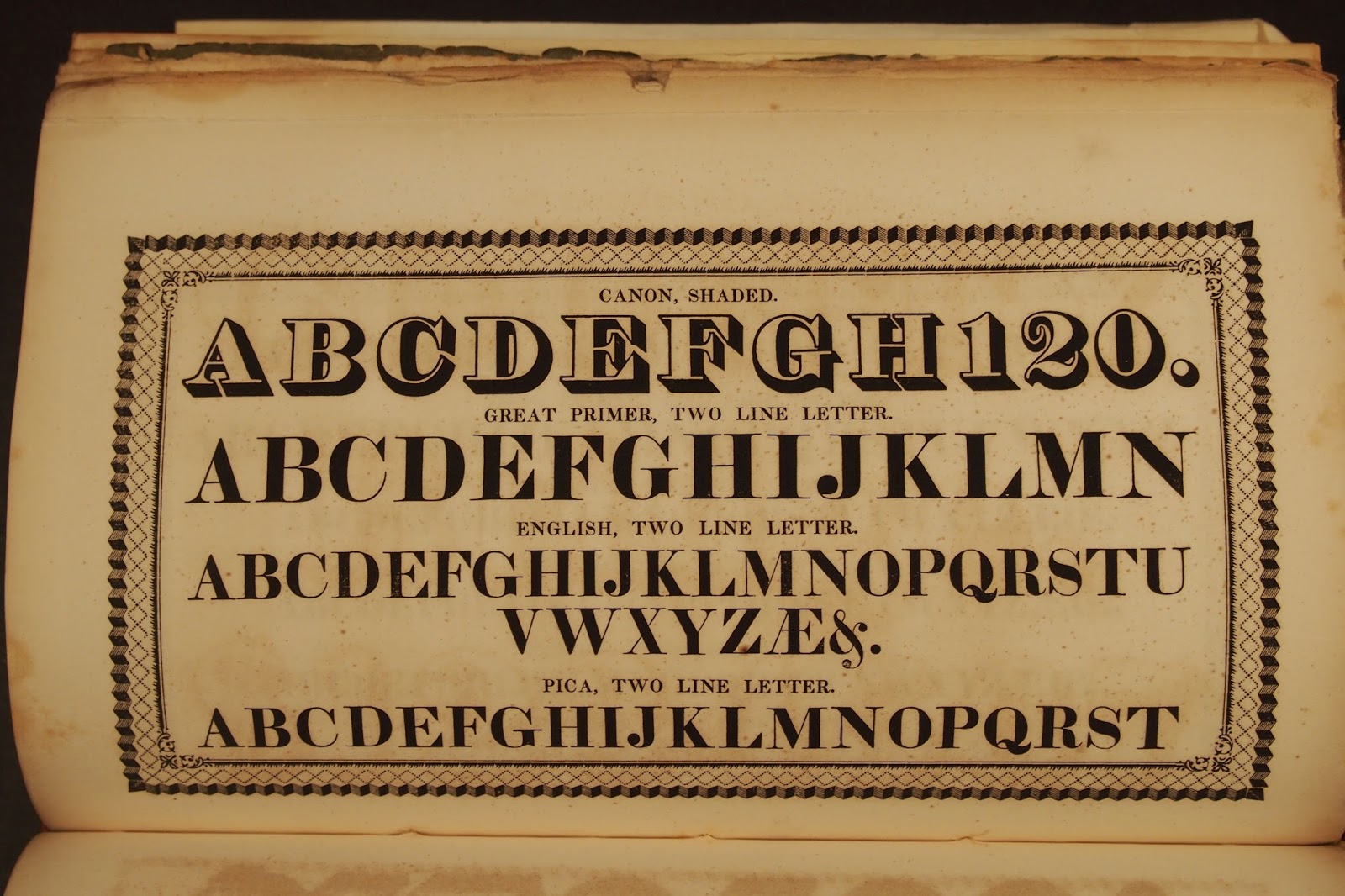 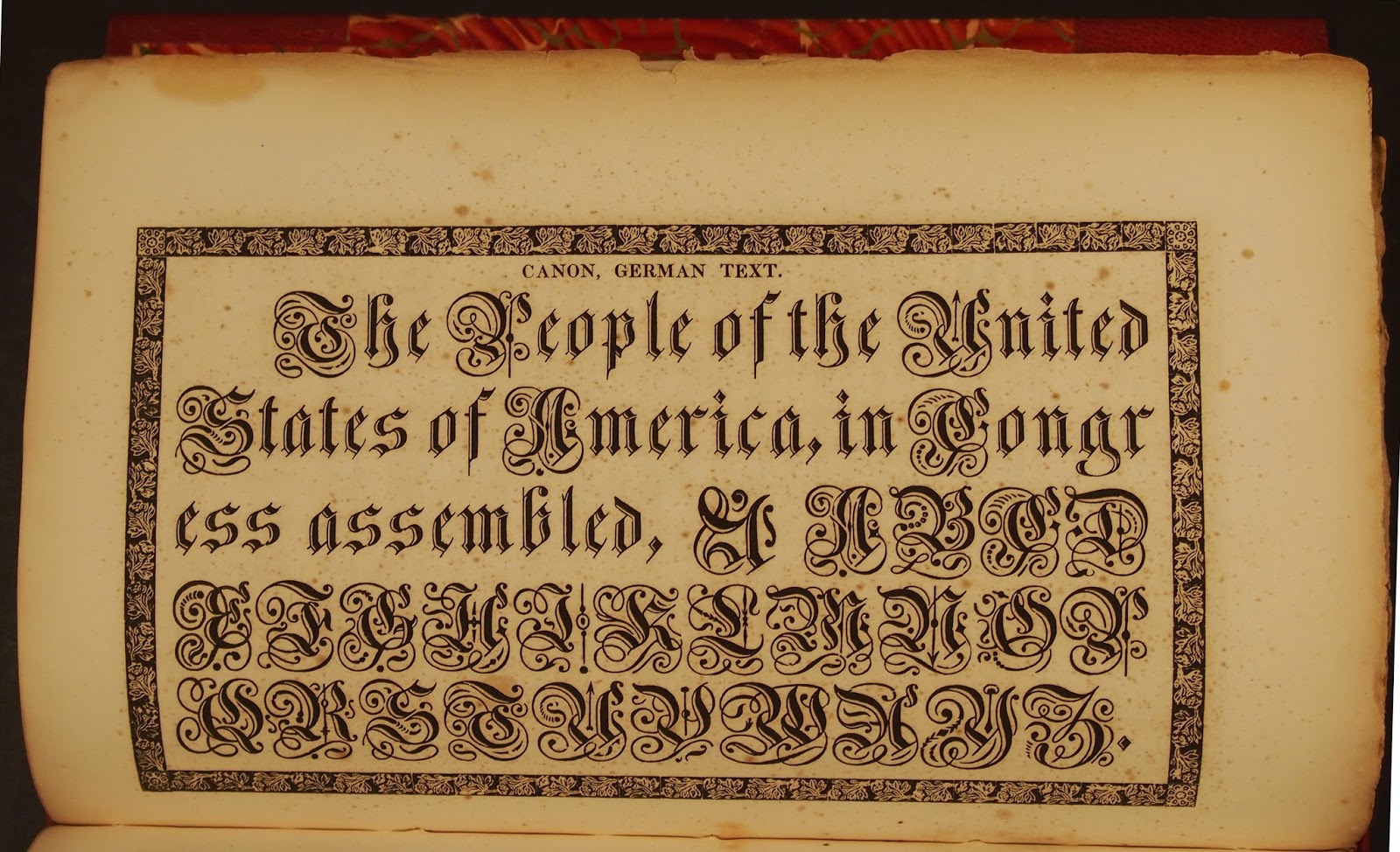 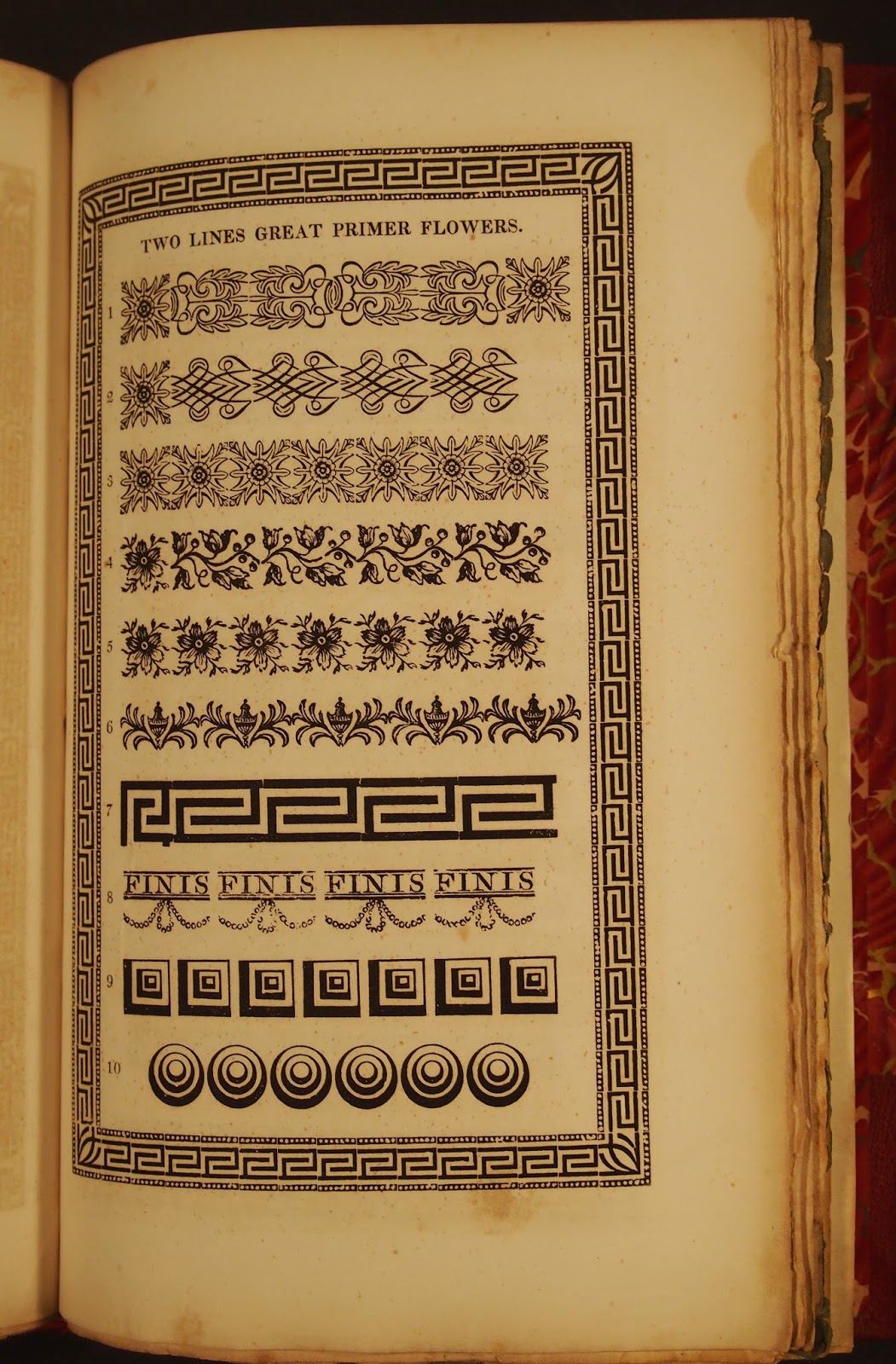 Jaime Henderson,
Archivist
at Tuesday, August 26, 2014 No comments:
Email ThisBlogThis!Share to TwitterShare to FacebookShare to Pinterest

Barnhart Brothers and Spindler's are a Type Tuesday favorite, particularly for their use of bold colors and stylish, modern type design. 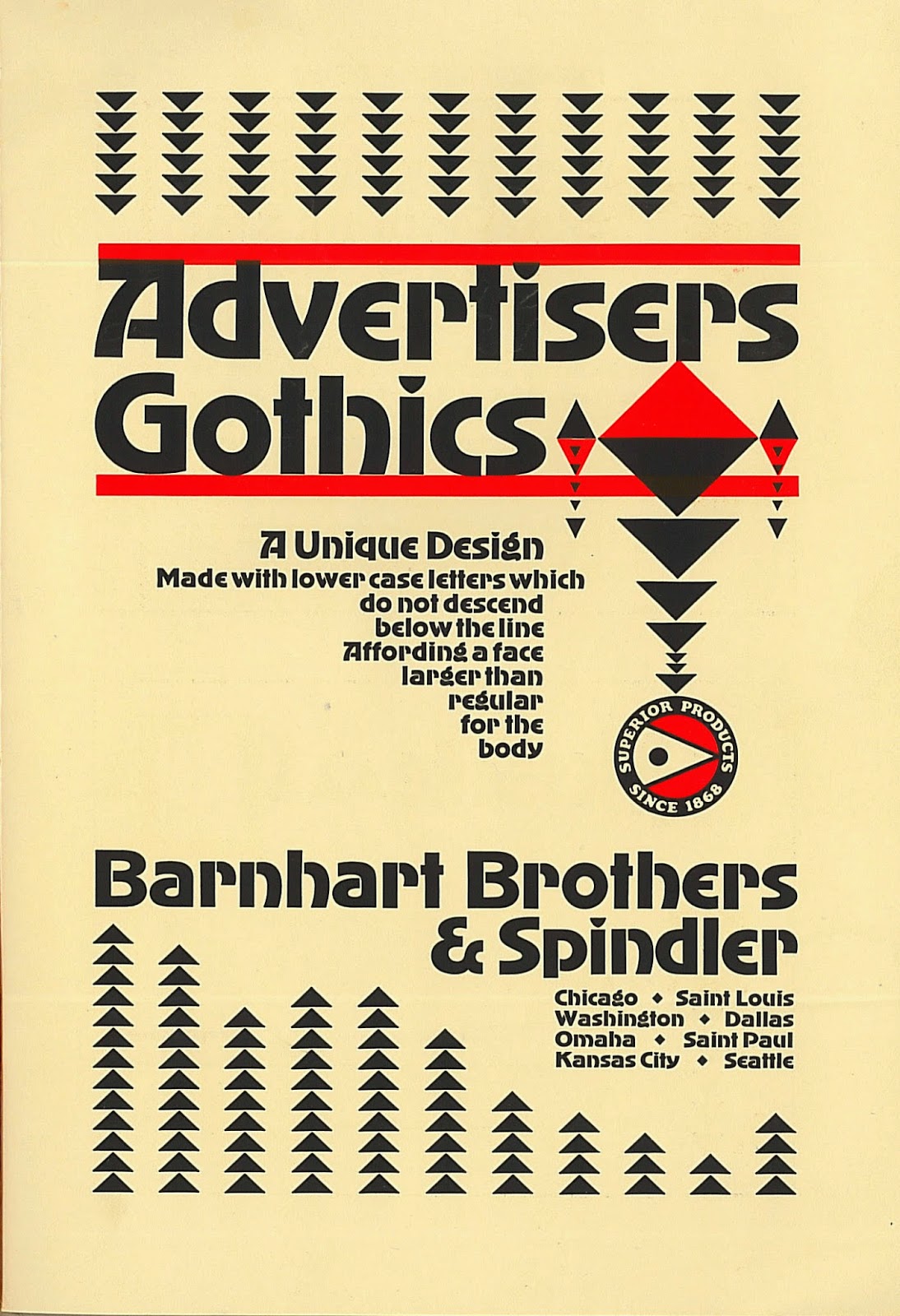 Barnhart Brothers and Spindler's type specimen is certainly eye-catching and their design for Advertisers Gothics unique - its letters do not have any descenders, creating a sturdy, resolute typeface. 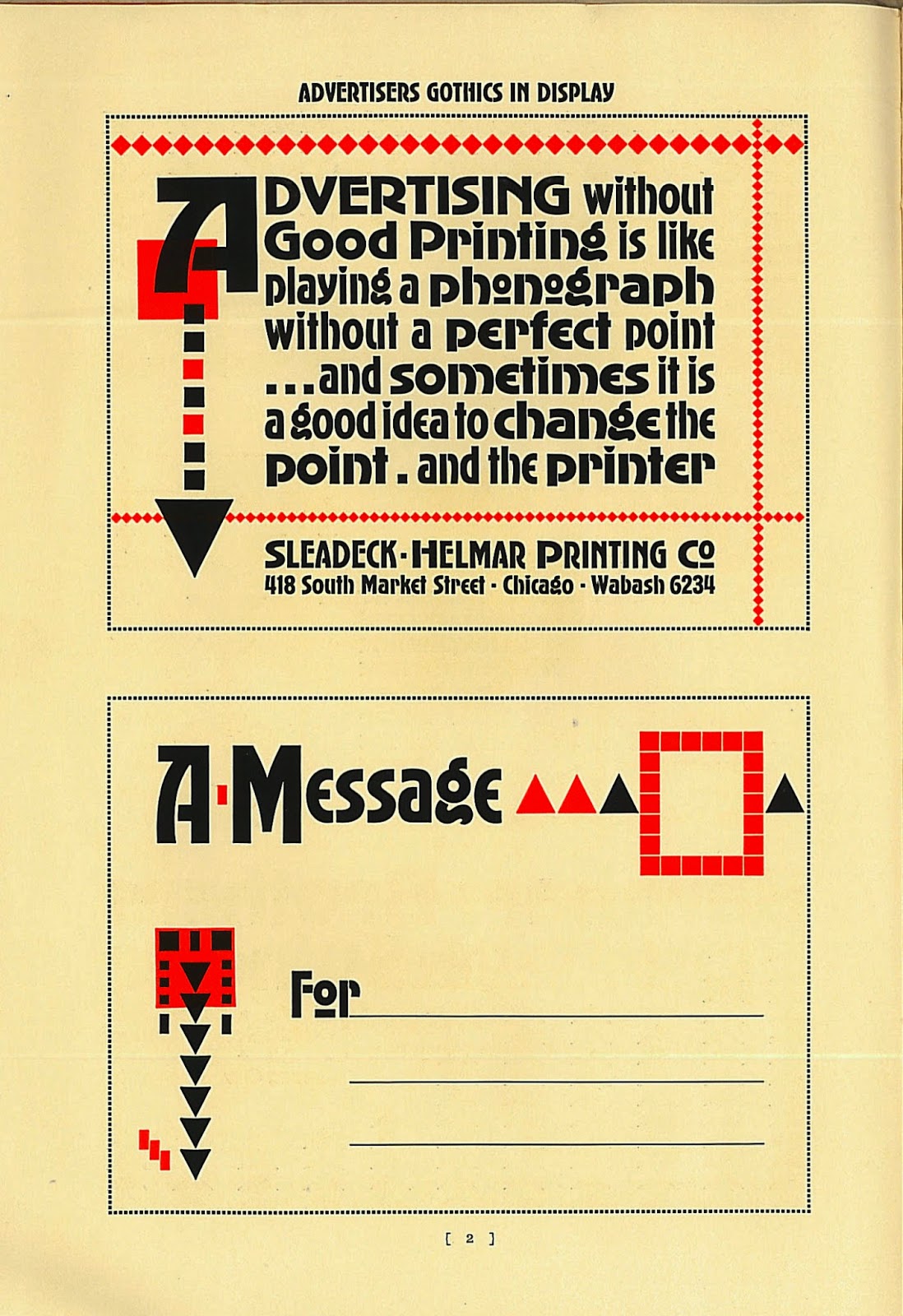 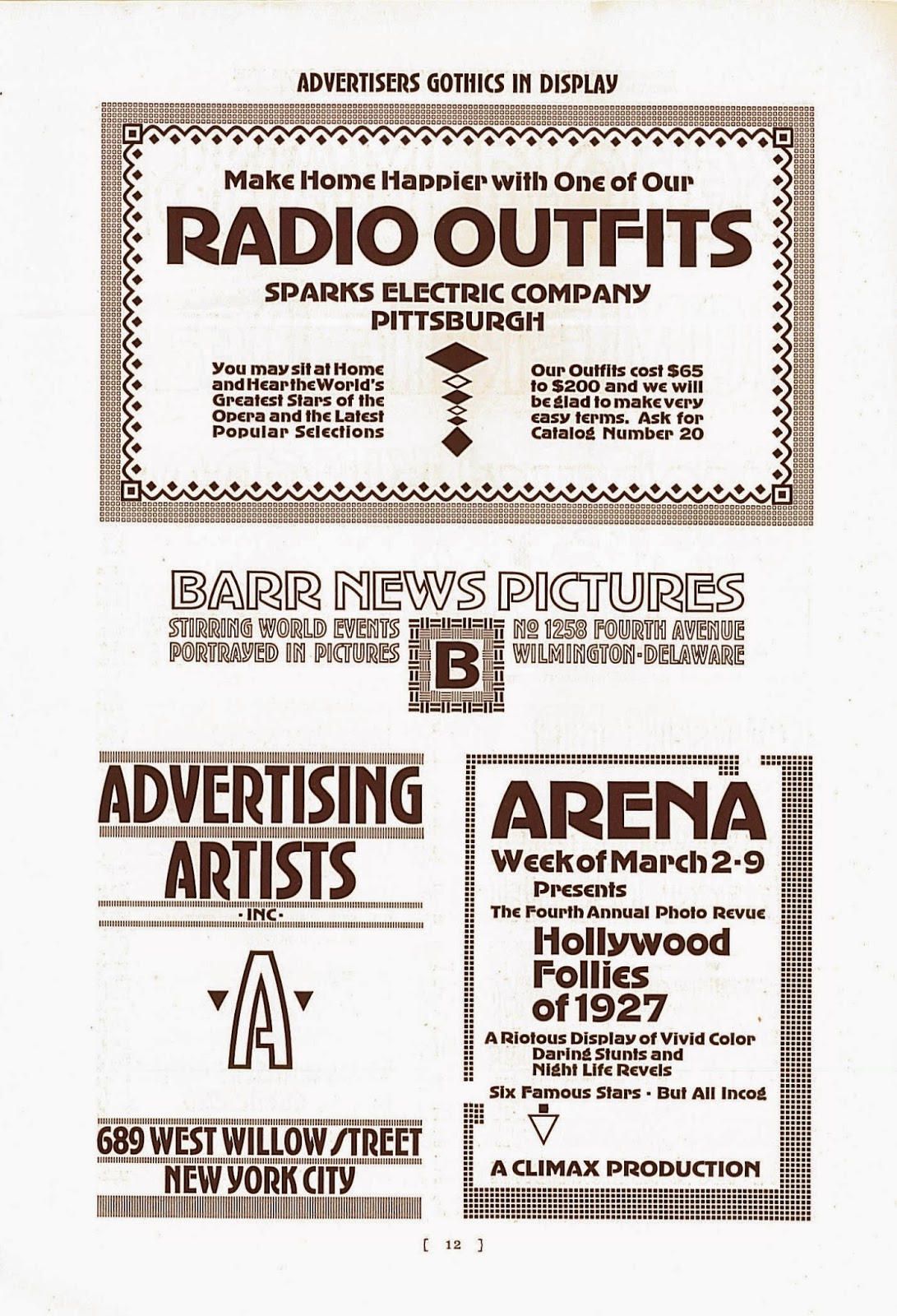 Jaime Henderson,
Archivist
at Tuesday, August 19, 2014 No comments:
Email ThisBlogThis!Share to TwitterShare to FacebookShare to Pinterest

at Monday, August 18, 2014 No comments:
Email ThisBlogThis!Share to TwitterShare to FacebookShare to Pinterest

Today we feature examples of work from one of the oldest type specimens in the Kemble Collection, the George Bruce and Company's Specimen of Printing Types and Ornaments, published in 1833. 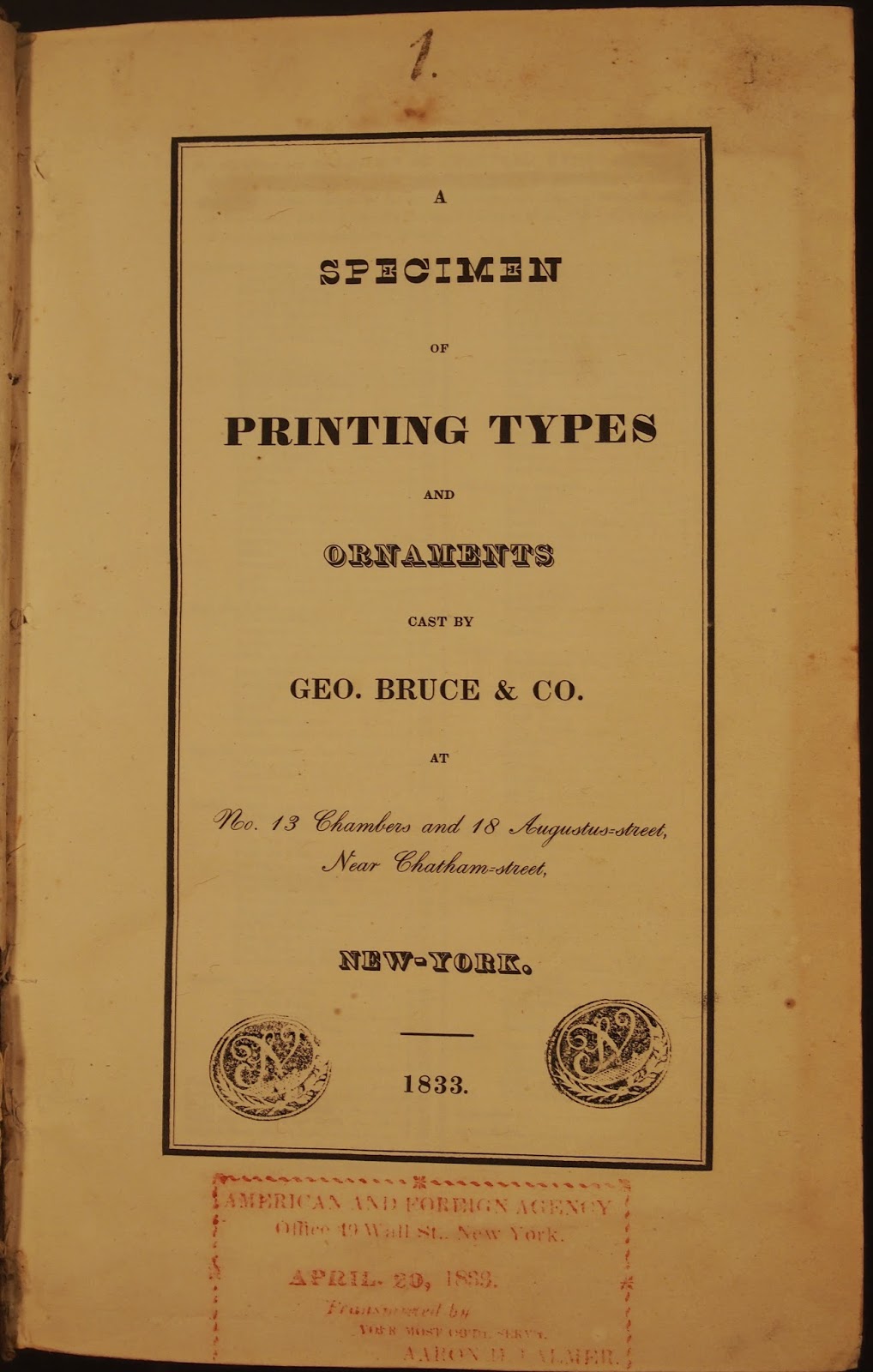 George Bruce had learned to cast his own type while experimenting, along with his brother David, on how to accomodate type for the stereotyping printing process. In 1818 the brothers opened their own foundry on Chambers Street in New York, with George concentrating on developing the type-founding business and David giving his attention to the stereotype process. 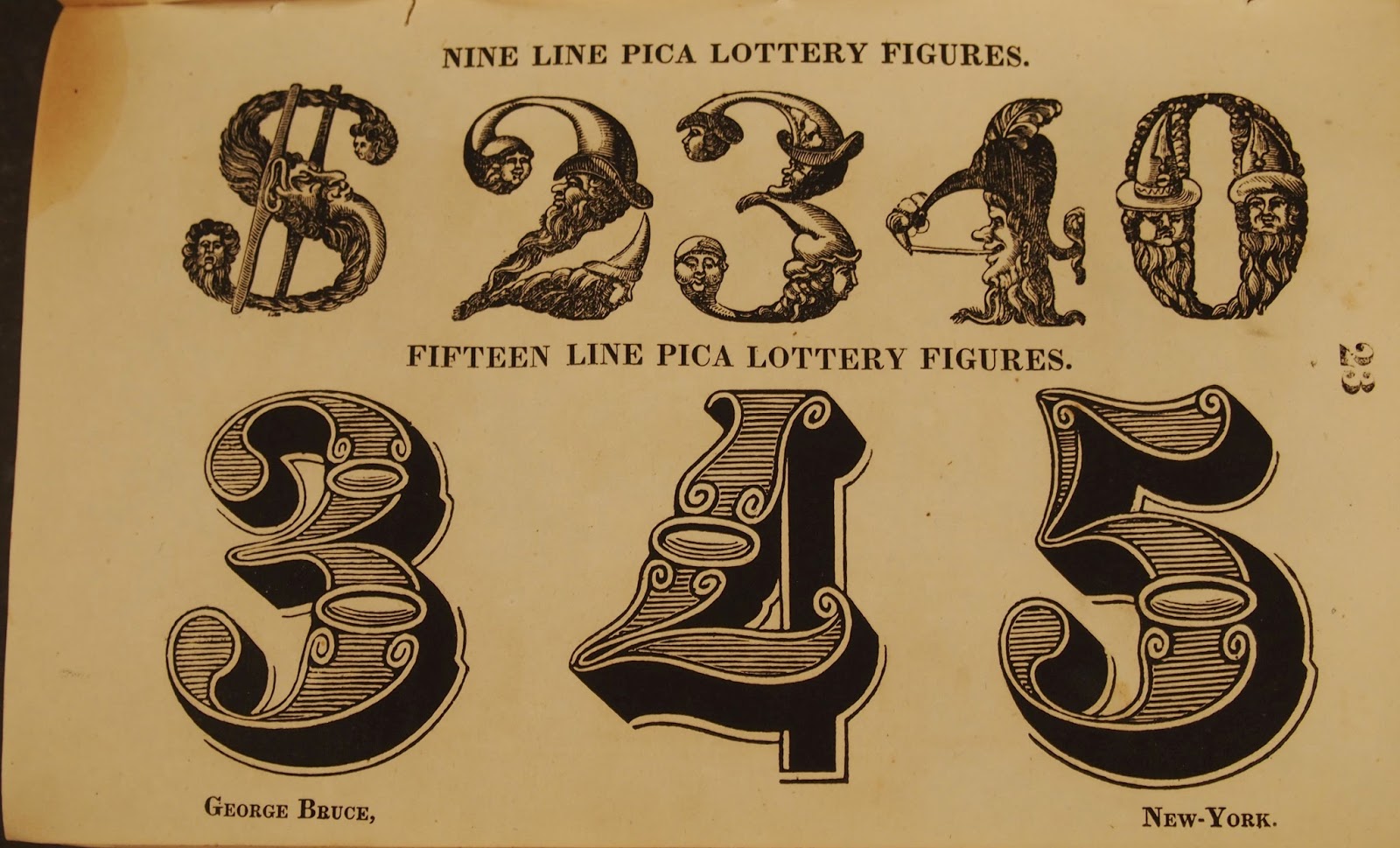 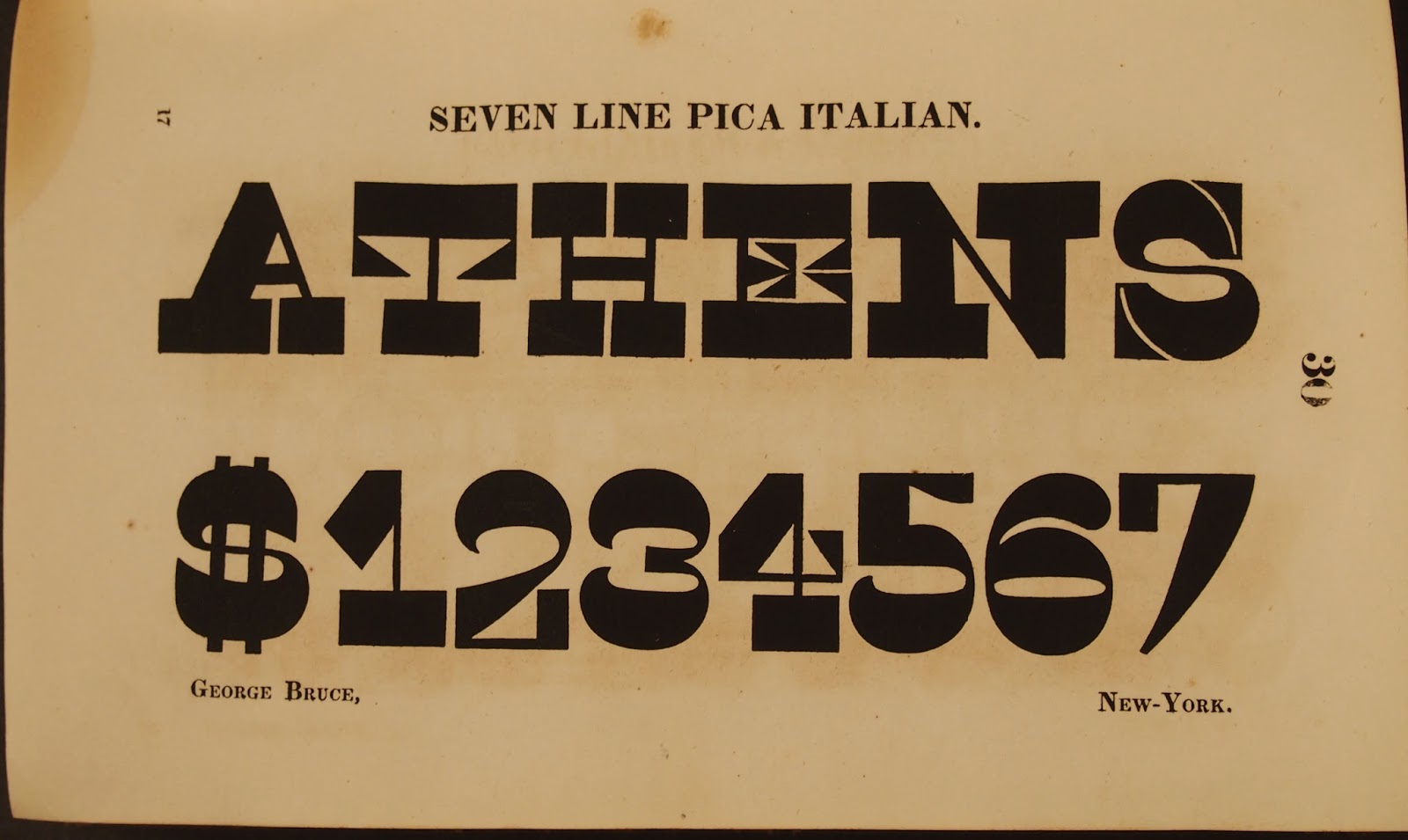 David's ill-health forced him to retire from the business, and George continued on with type-founding, publishing Specimen of Printing Types and Ornaments in 1833 and making himself known among printers for his tasteful designs. 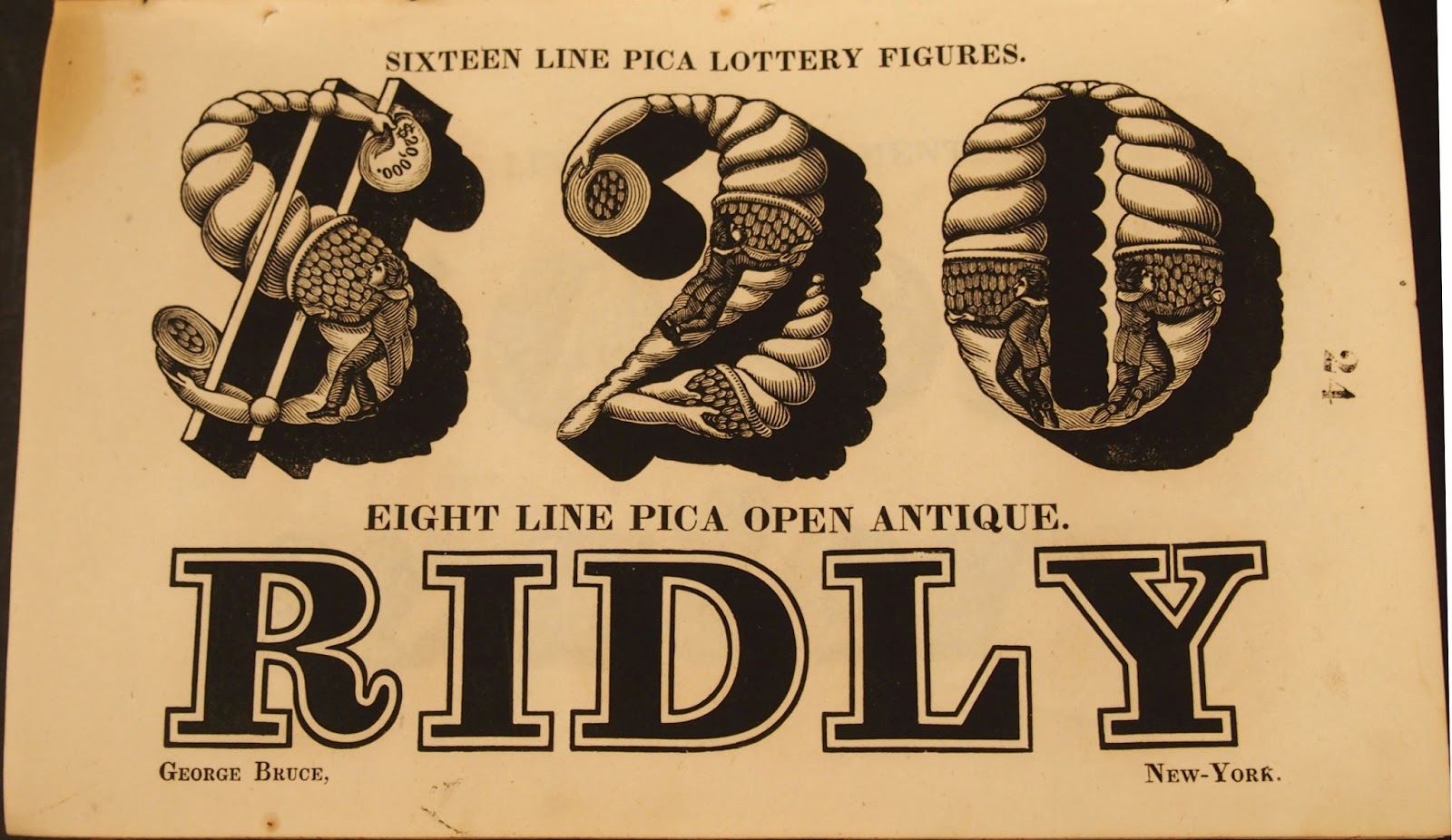 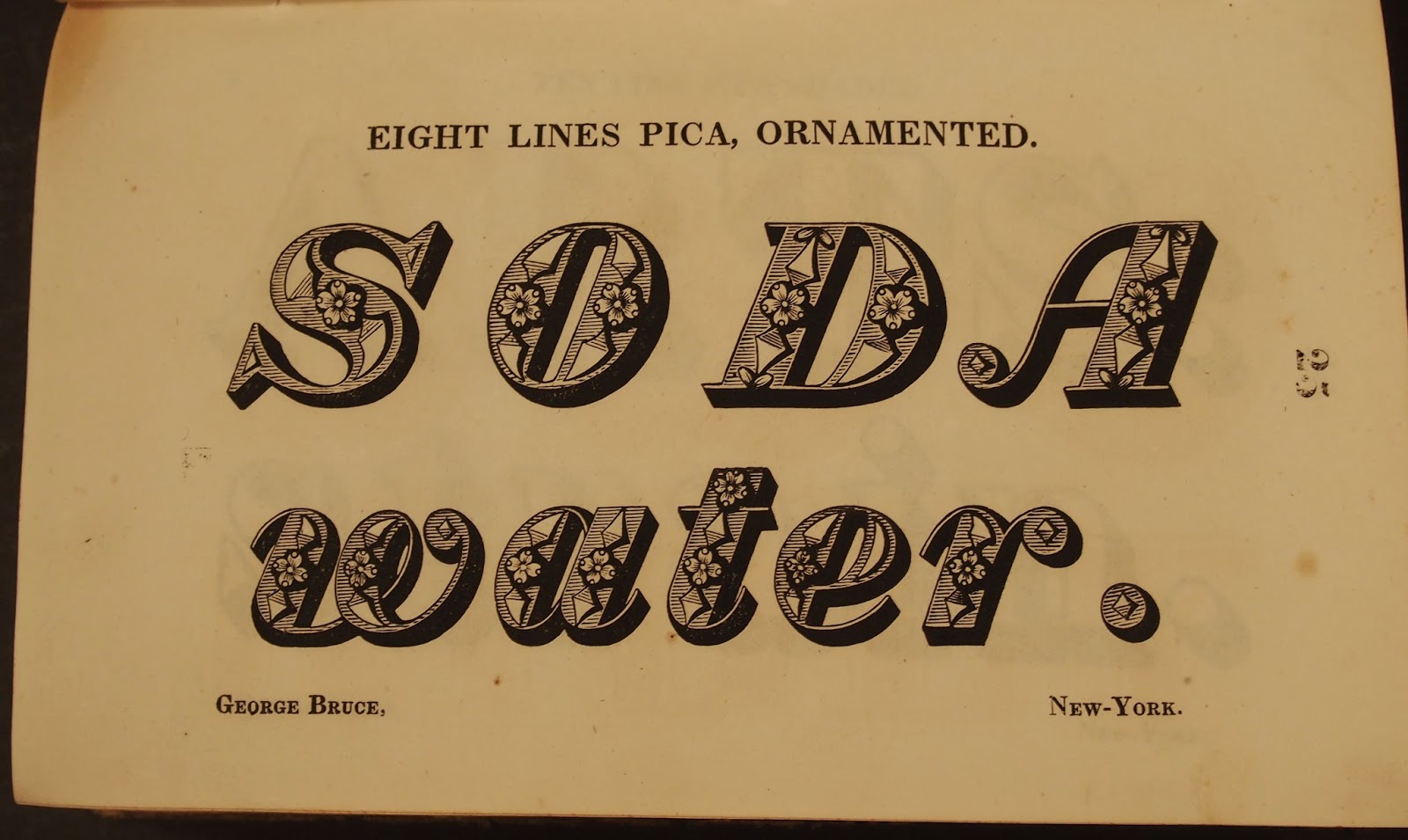 Jaime Henderson,
Archivist
at Tuesday, August 12, 2014 No comments:
Email ThisBlogThis!Share to TwitterShare to FacebookShare to Pinterest

Decades ago CHS wisely used Library Fund monies to purchase a small collection of papers of a little-known portrait artist from a Parisian book dealer. Although Bruce Kamerling used the collection in his deeply researched article on Leonardo Barbieri, "California's Leonardo: The portraits of Signor Barbieri" (California History, December 1987), the papers remained uncataloged. Now cataloged, they present an intimate glimpse into the extraordinary life of Barbieri, and his friendship with the quixotic French count, Gaston Raousset-Boulbon, who led an ill-fated filibuster expedition to northern Mexico in hopes of establishing an independent republic of Sonora. After losing the Battle of Guaymas in 1854, the count was executed. Presumably his army (in which Barbieri may have served as a  lieutenant) was scattered to the four winds. Barbieri hastened to Peru, where he founded an art academy.


Barbieri describes Raousset-Boulbon with great respect and tenderness, as a jovial man with an undercurrent of quiet sadness that alarmed the artist: "su carácter era jovial, pero se dejaba [sentir] un mal estar, una sombría tristeza, que en varias ocasiones me alarmaba...." In 1853, Barbieri attempted to capture the Count's complex character in a portrait—which, remarkably, is found in the CHS collection as well. Looking at a reproduction of the painting, one wonders: was the Count a tragic figure (as Barbieri suggests), a quixotic fool, or a vicious opportunist? Is it possible for a man to be all of these things? 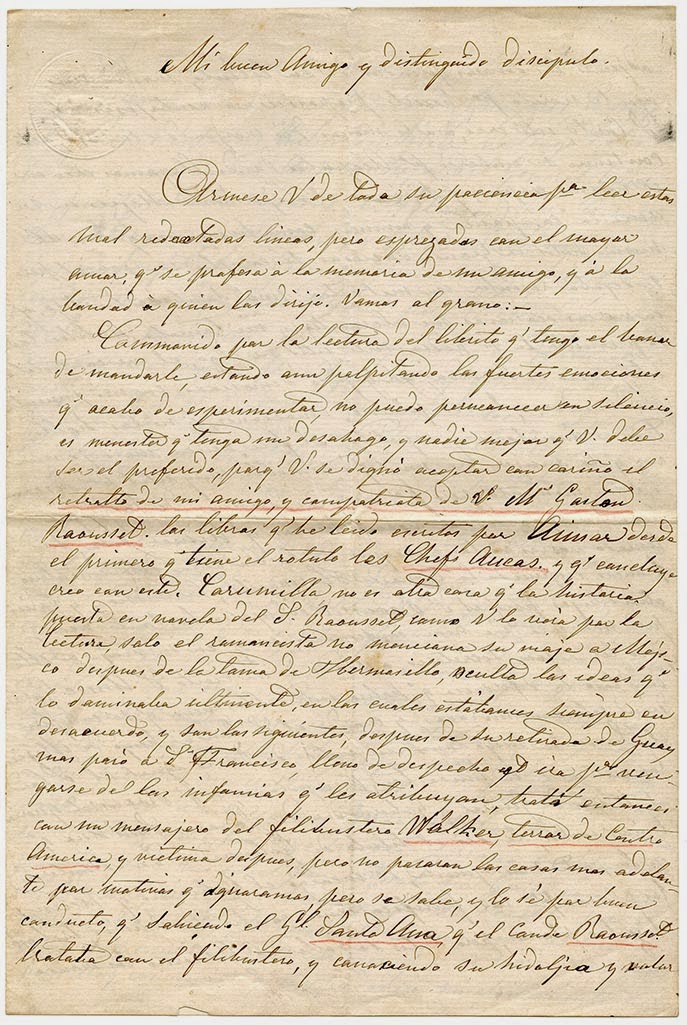 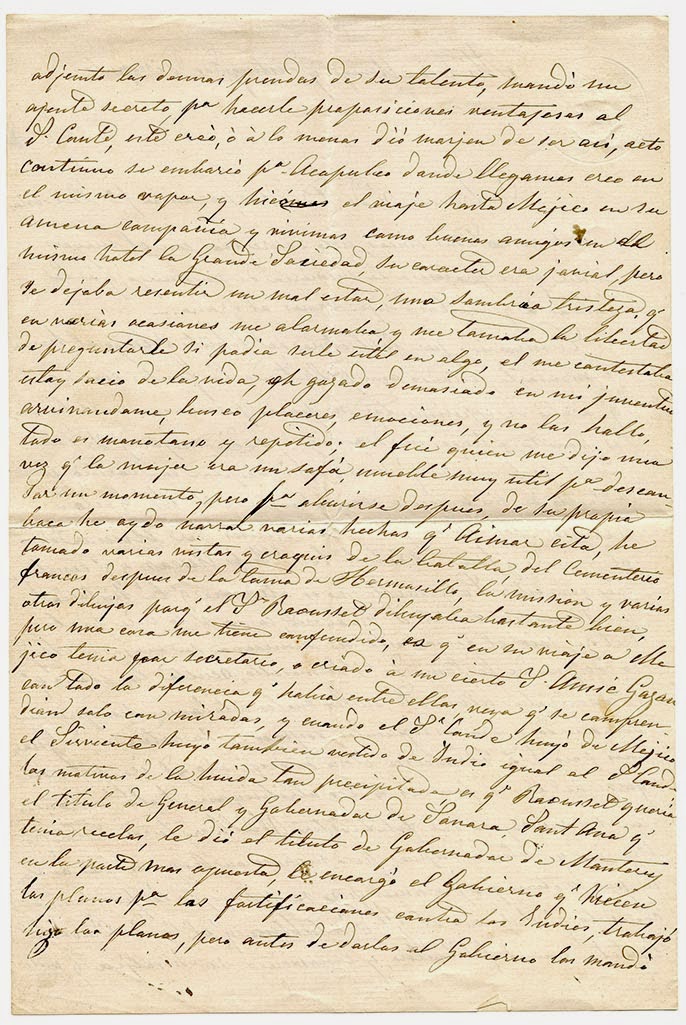 at Monday, August 11, 2014 No comments:
Email ThisBlogThis!Share to TwitterShare to FacebookShare to Pinterest

American Type Founders Company's popular Stymie series (1931) stands tall with the introduction of Stymie Elongated Characters. The strechy ascenders and descenders of these lean, lanky letters were just what advertisers needed to give their publicity printing an extra punch. 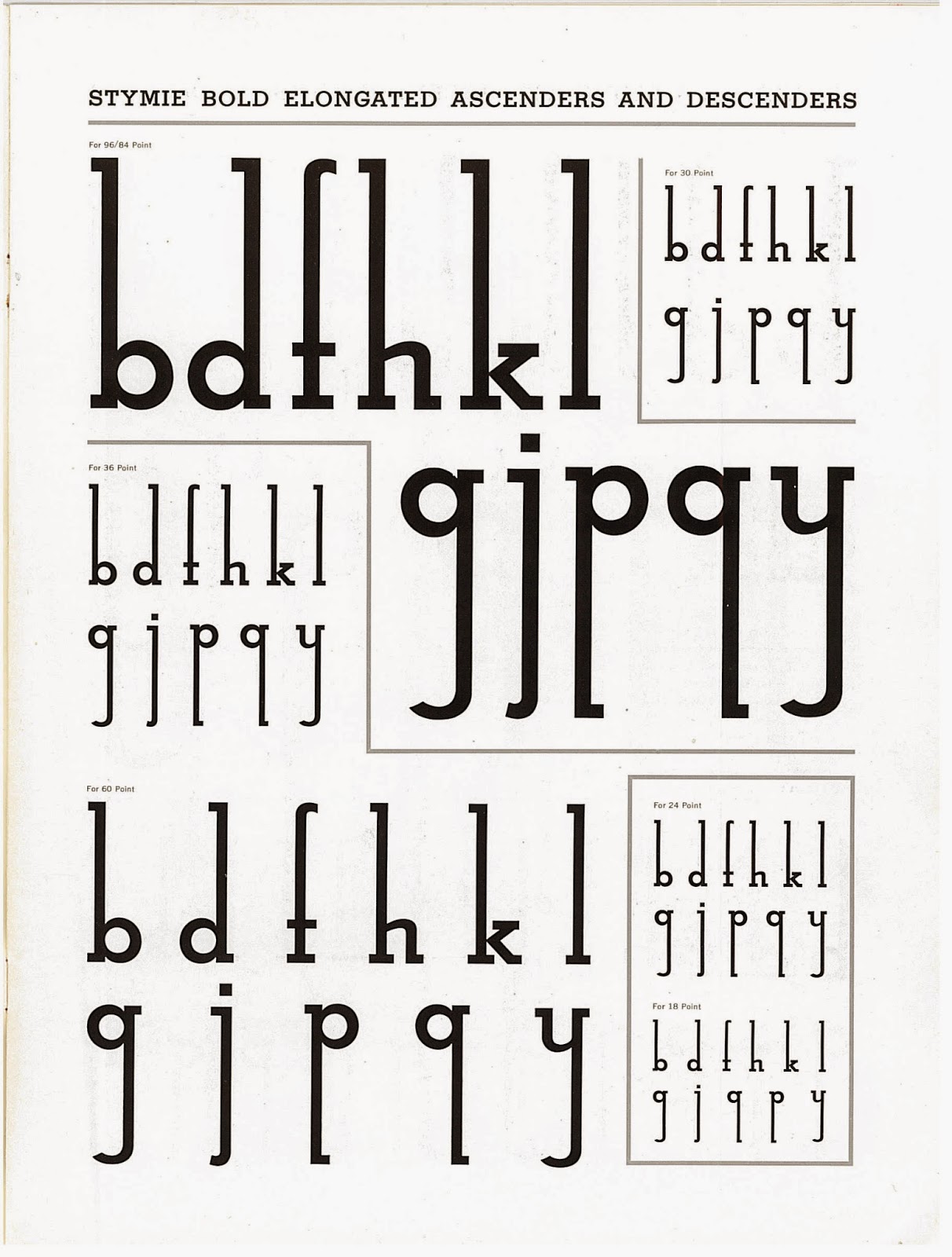 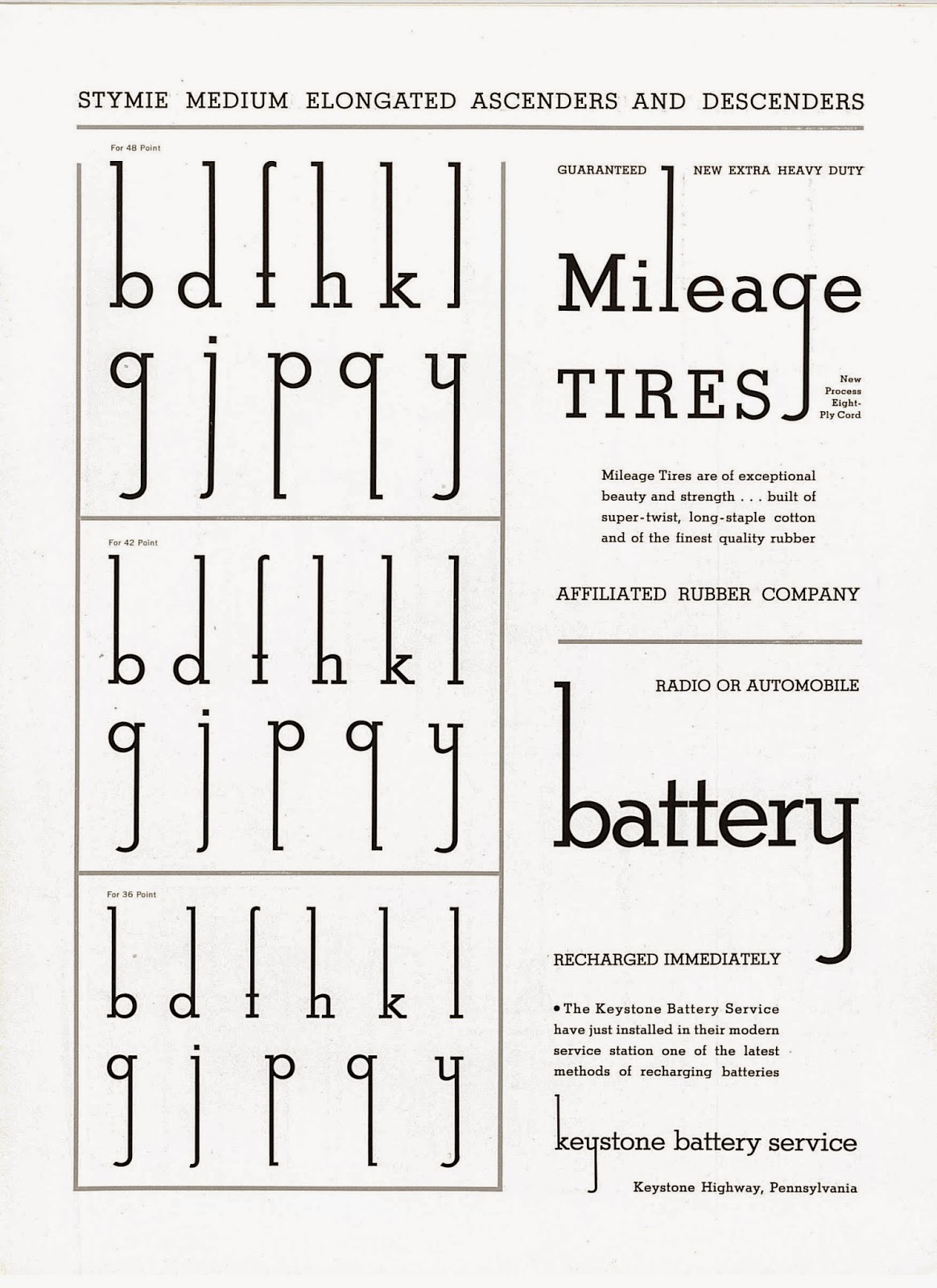 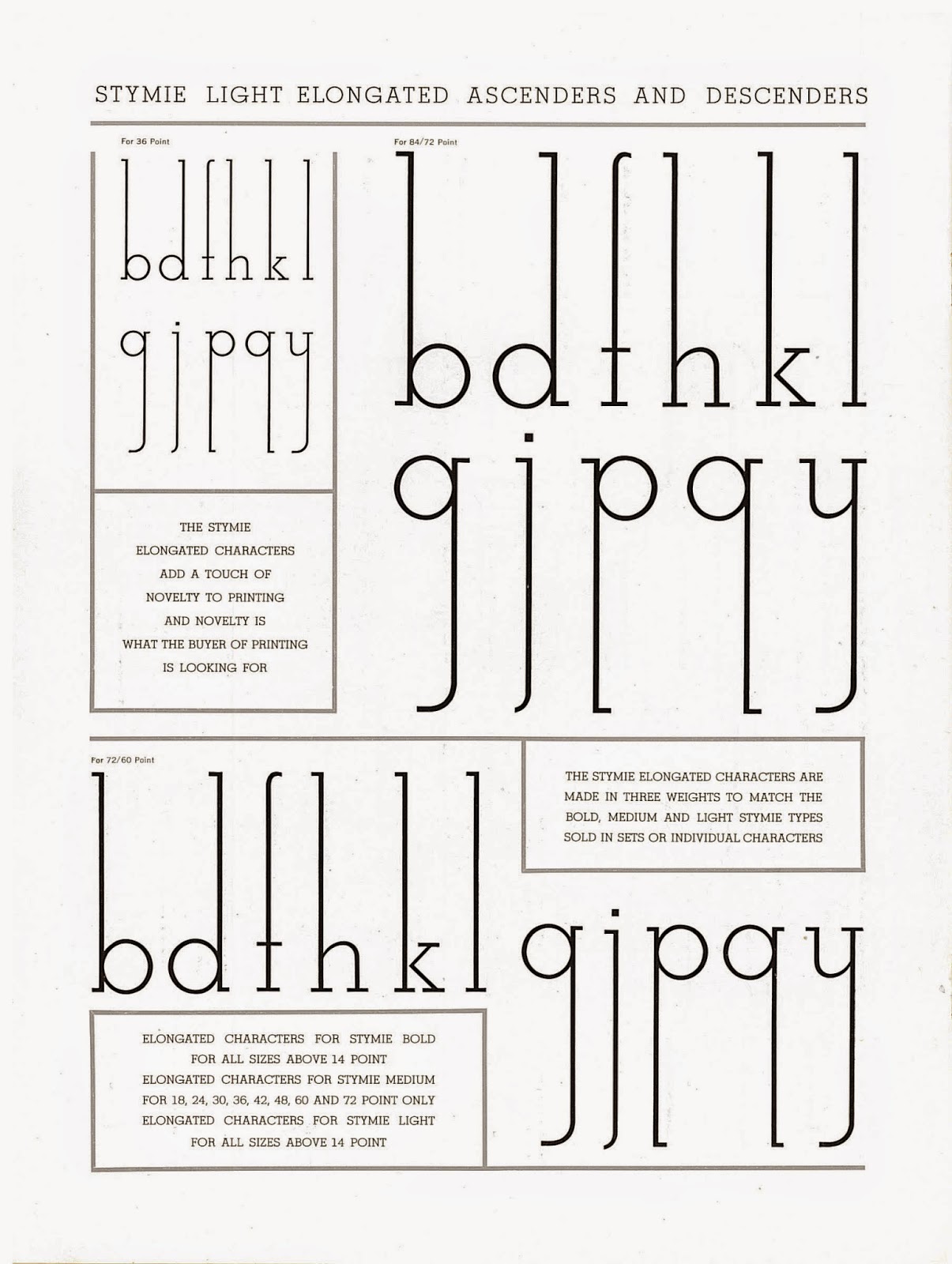 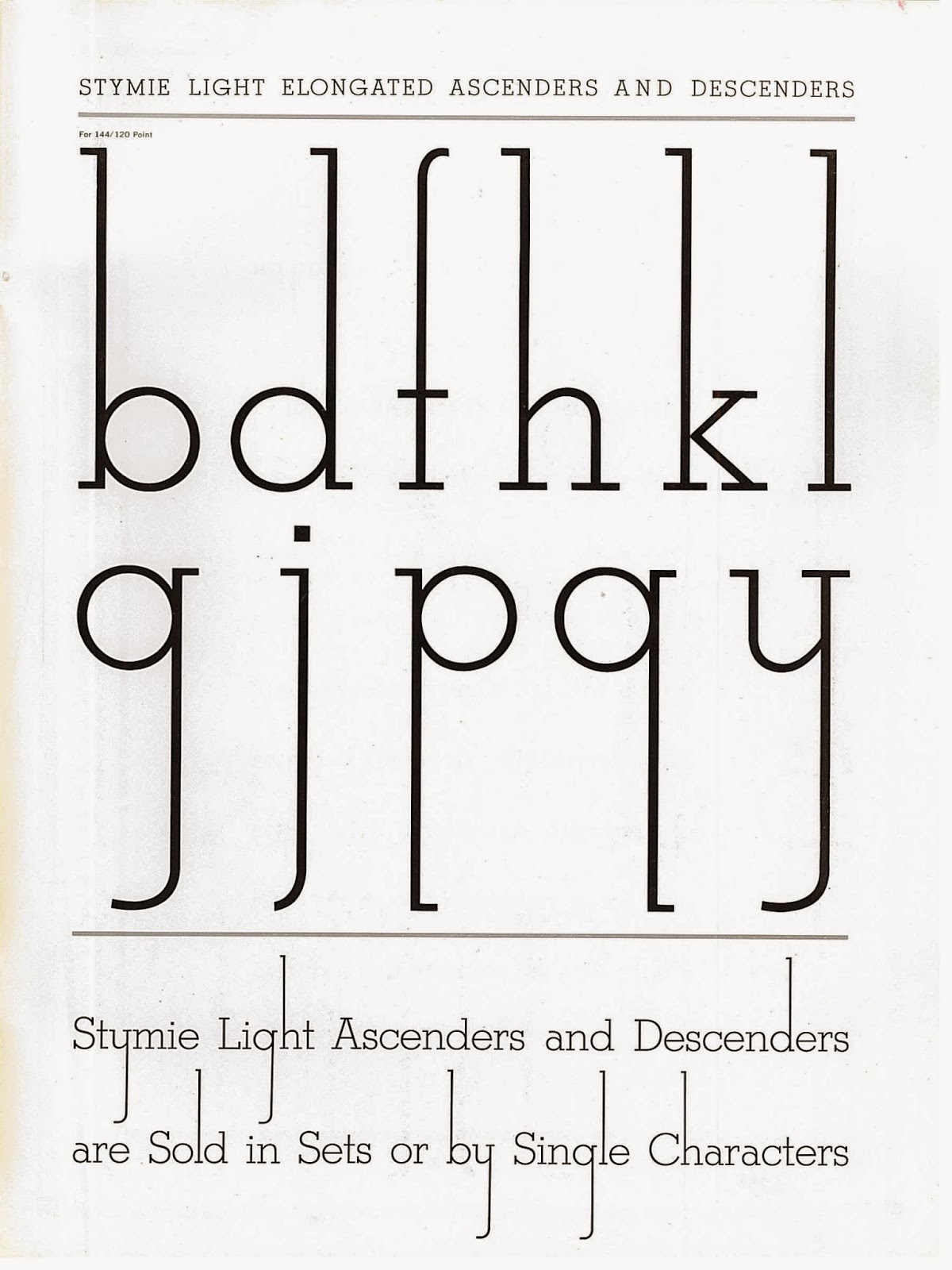 Jaime Henderson,
Archivist
at Tuesday, August 05, 2014 No comments:
Email ThisBlogThis!Share to TwitterShare to FacebookShare to Pinterest

Between 1902 and 1914, Keystone Consolidated Mining Company secretary Charles E. Anderson wrote a series of fascinating letters to his adult son Charles M. Anderson in New York City. These letters (two pages of which are reproduced and transcribed below) are full of insider tips and cautionary financial advice, reminding one of the cyclical crises to which our economic system is prone. 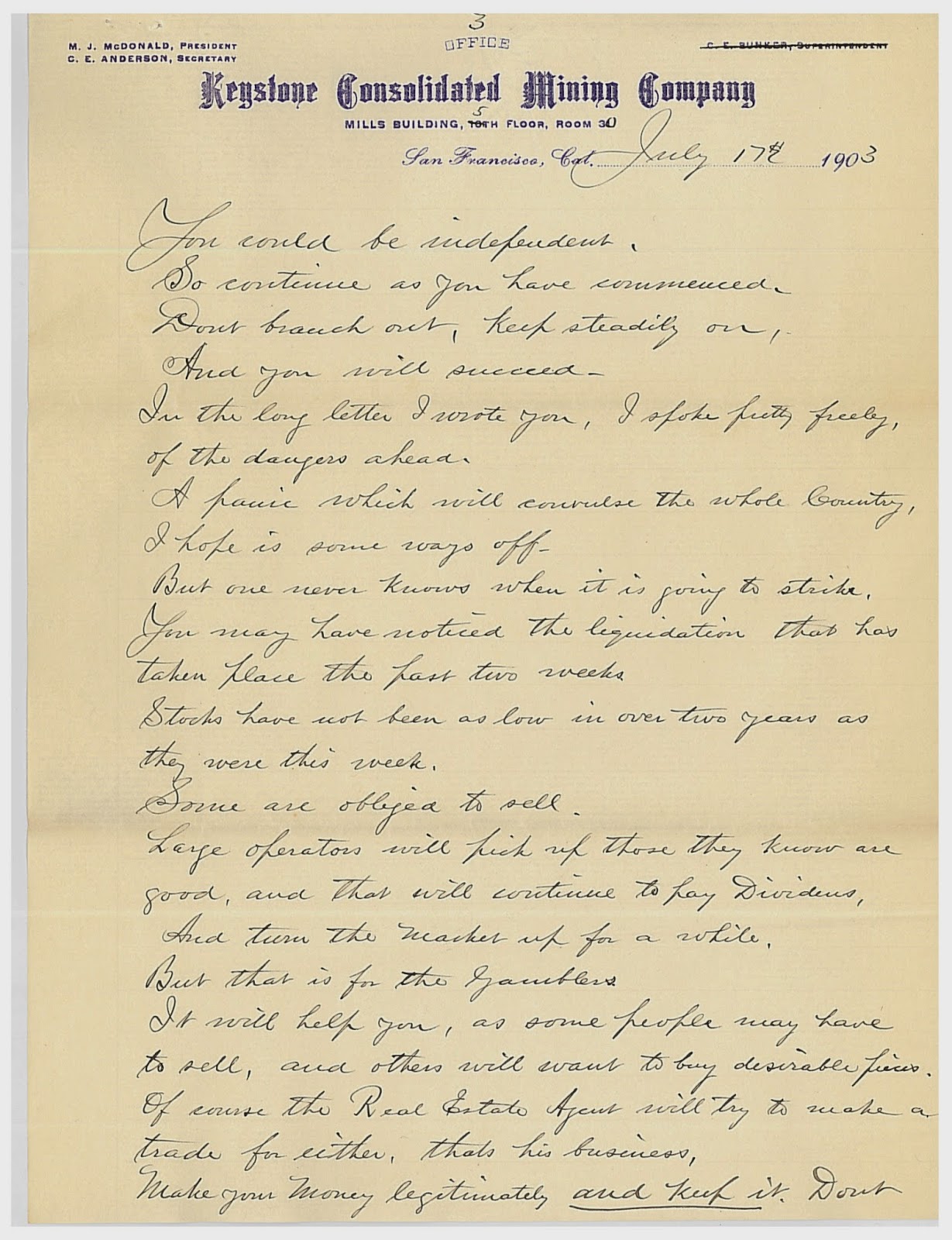 Don't branch out, keep steadily on, and you will succeed. In the long letter I wrote you, I spoke pretty freely of the dangers ahead. A panic which will convulse the whole Country, I hope is some ways off. But one never knows when it is going to strike. You may have noticed the liquidation that has taken place the past two weeks. Stocks have not been as low in over two years as they were this week. Some are obliged to sell. Large operators will pick up those they know are good, and that will continue to pay Dividends, and turn the market up for a while. But that is for the Gamblers. It will help you, as some people may have to sell, and others will want to buy desirable pieces. Of course the Real Estate Agent will try to make a trade for either, that's his business, make your money legitimately and keep it. Don't invest in Leases, which I consider extremely hazardous. Have a Safe Deposit Box at $5.00 or $10.00 a year and stow away your coin. You may have to keep a small running [account] for convenience sake, in a convenient Bank. But when trouble comes, the Banks will go by the hundreds. These are things which must not be talked about. A big conflagration ensues from a very small beginning. But one must think for themselves and keep their own counsel.