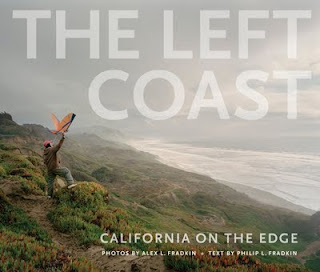 Thursday, , 6:00 p.m.
Book event with photographer Alex Fradkin and writer Philip Fradkin
Philip Fradkin, one of ’s most astute environmental historians, felt drawn to the coast as soon as he arrived in in 1960. His first book, : The Golden Coast, captured the wonder of the shoreline’s natural beauty along with the controversies it engendered in 1974. In this book, the author and his photographer son Alex Fradkin revisit some of the same places they explored together in the early 1970s. From their written and visual approaches, this father-and-son team brings a unique generational perspective to the subject. Mixing history, geography, interviews, and personal experiences, they present a realistic portrait of a dramatic coastline within the context of their close relationship. Alex Fradkin’s expressive photographs contribute an additional layer of meaning and enrich the subject with their distinctive eloquence while adding another dimension to his father’s words.  In this way, the book becomes the story of a relationship as well as a probing study of a varied and contested coastline. Book will be available for purchase at event. Please RSVP to 415.357.1848, ext. 229 or rsvp@calhist.org.
at Thursday, July 21, 2011 No comments:
Email ThisBlogThis!Share to TwitterShare to FacebookShare to Pinterest
Labels: California Historical Society, Events

Thanks to Pamela Jean Vadakan and the California Audiovisual Preservation Project, four of CHS’ labor oral histories have been digitized and are available on the Internet Archive:
http://www.archive.org/details/californiahistoricalsociety
Created in the late 1970s for CHS, these oral histories provide a fascinating and intimate glimpse into the labor movement, its leadership and rank-and-file membership; its progress, setbacks, and internecine struggles; and some of its defining events, including the San Francisco General Strike of 1934. Finding aids to CHS’ collection of labor oral histories are available on the Online Archive of California.
Now, scholars, students, and others can listen to four of these important stories, narrated in real time by the voices of the past.
, Archivist & Manuscripts Librarian
at Monday, July 11, 2011 No comments:
Email ThisBlogThis!Share to TwitterShare to FacebookShare to Pinterest
Labels: California Historical Society, Collections

A Century of Landscapes

A Century of Landscapes: Selections from the California Art Club
At the dawn of the twentieth century, California became home to a legion of artists who came to paint the state’s awe-inspiring natural landscapes “en plein air,” an Impressionistic style in which painters worked outdoors in order to capture the ephemeral moment of natural lighting across a landscape. The California Art Club was established in 1909, by artists, patrons, and visionaries for the sole purpose of capturing the beauty of California’s landscapes in their paintings. The California Art Club is recognized as one of the oldest, largest and most active leading professional art organizations in the world. A unique aspect of the organization is that it includes among its members nationally renowned artists, art students, hobbyists, art scholars and art enthusiasts, in order to interject different perspectives into the dialogue about traditional art.

Among the artworks made by California Art Club members and held in the California Historical Society’s Collection is Norman Stiles Chamberlain’s 1923 painting San Juan Capistrano, which is one of the most famous missions of California. George Demont Otis’ view of Chinese Shrimp Camp, Hunter’s Point, ca. 1920s documents early shoreline industry and a way of life and serves as counterpoint to the vibrancy of Esther Anna Hunt’s ChineseTemple Scene, San Francisco, 1915.

The California Historical Society collection also holds multiple works by one of the California Art Club’s earliest members, Charles Albert Rogers. The painting, Fernside, Alameda, California, was painted in 1905 and shows a rural landscape before the influx of 1906 earthquake survivors from across the Bay. Beyond the shadows to the right is a sliver of the Oakland estuary, and further in the distance behind the trees are the Oakland Hills. In stark contrast, his paintings, San Francisco―City Hall, 1906, shows the aftermath of the devastation and After the Fire, 1906, a finished study of steps and concrete walls at the base of a destroyed Nob Hill house. 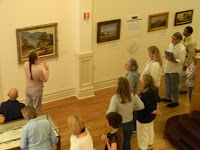 Think CaliforniaWhat comes to mind when you think of California? Beaches, the Gold Rush, freeways and road trips, cultural diversity, agricultural abundance, earthquakes, Hollywood? Indeed, there are many spectacular stories in California’s history. The California Historical Society presents Think California, an exhibition highlighting the colorful history of California through the institution’s remarkable collection of artwork, artifacts, and ephemera. This ambitious exhibition asks the question “What do you think about when you think of California?” Here you see both common and little known facts of the Golden State’s fascinating history, as well as the myths and realities that are the lore of California. Think California will  be on view through Saturday, July 2, 2011 from 12:00 - 4:30 pm in the galleries of the California Historical Society, 678 Mission Street, San Francisco.