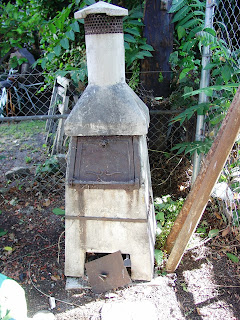 
They are Los Angeles’s history keepers. They research, organize, store, repair, and care for historical artifacts and make them available to us online, at exhibitions, through publications, or in their homes. This summer, from August 5 to August 27, the California Historical Society celebrates Los Angeles’s history keepers with an exhibition at the historic El Pueblo National Monument.

A series of blogs brings our online visitors a sample of objects in the exhibition. In this blog, research into the city’s history of refuse collection and disposal leads one history keeper to acquire this old backyard incinerator—and successfully find it a home in a permanent collection.

As all historians know, you don’t just pass up on a treasured relic of the past, especially one such as this that tells the story of L.A.’s trashy past full of issues ranging from environmental protection to traffic, to organized crime to mayoral politics.

In the 1940s Los Angeles was searching for ways to minimize the costs of rubbish collection and disposal as well as reduce smog levels. Burning refuse was then a standard method of disposal in municipal incinerators and several open pits on the outskirts of the city. In 1944 the city’s main incinerator fell into disrepair and was permanently closed. This led to a crisis in the refuse industry. Home backyard incinerators, a firmly established practice since the turn of the twentieth century, became an even more popular method of disposing trash.

While burning trash meant less garbage trucks—and less traffic—on the streets of the city, it also meant more pollution in the air.

“Like a miniature Vesuvius,” the Herald-Examiner reported on August 2, 1945, “this open dump belches forth clouds of eye-irritating smog to pollute the atmosphere of the entire Los Angeles County. Scores of open dumps like this one would be eliminated through a county-wide incinerator and rubbish collection system.”

In the fall of 1954, the city council approved an increase in the daily hours of rubbish burning from four hours to seven hours. Rubbish could now be burned from 6 am to 10 am and from 4 pm to 7 pm. Although only a small contributor to Los Angeles’s overall smog, backyard incinerator smoke was very visible and its odors persisted for quite some time. As a result, residents began attributing high smog levels and poor health quality to the smoke from these units and complained to the air control district, local councilmen, and county supervisors about them.

“W. G. Ney and Loy E. Moore, owners of the Peerless Incinerator Company, 1854 W. Washington Blvd., display their inventory of backyard incinerators as they hear reports of banning all incinerators,” the Herald-Examiner reported on October 20, 1954.

The County of Los Angeles addressed these complaints in 1955 with a phased-in ban on backyard incinerators. To Los Angeles Mayor Norris Poulson, the writing was on the wall. If the ban were applied city-wide, the garbage would have nowhere to go but to privately-owned dumps, which were known to be corrupt through involvement with organized crime.

Poulson immediately requested the county to delay implementation of the ban pending discussions on a more efficient garbage collection system for the city. He then began investigating private waste haulers and dumps for racketeering violations while at the same time proposing a new tax-funded municipal garbage collection program for the entire city that would ensure city-owned landfills and collection trucks for years to come. Such a municipal collection program, he saw, would avoid the need for dirty backyard incinerators, corrupt haulers, and privately-owned dumps.

At a hearing conducted by Mayor Norris Poulson and his investigation into rubbish collection racketeering, reported the Herald-Examiner on June 20, 1955, “The crowd heard testimony that threats have been made against persons who tried to dump their own rubbish. This was described as “a customary threat.”

As the mayor continued holding hearings on organized crime’s involvement with garbage collection haulers throughout 1955, public sentiment shifted in favor of his proposed municipal collection program. However, without adequate funding for such a program and with an expected increase in rubbish from the city-wide ban on backyard incineration, Poulson found himself in a difficult position.

By the summer of 1956, the city had started to phase in trash collection in areas where incinerator use was being slowly phased out. Poulson brought the proposed municipal collection program to a City Council vote on June 15, 1956. However, the council deadlocked, with six in favor and six opposed.

The mayor had no choice but to put the matter to a vote by the public, and on April 2, 1957, the residents of Los Angeles approved a new tax to fund a municipal garbage collection program for the city. Poulson won the battle against privately-owned haulers and dumps while enabling the ban on backyard incinerators to move forward. Later that year, on October 1, 1957, a total ban was placed upon incinerators by the county’s Air Pollution Control District, establishing the current way the city handles trash.

“Loader Fred Mosely and driver Henry Lind are shown at Washington Boulevard and Arlington Avenue with one of 57 new garbage trucks put in use today as the City starts its combustible rubbish collection,” reported the Herald-Examiner on April 8, 1957.”


As the Herald-Examiner reported on June 25, 1960: “Patrolman Terzo explained to a new resident that incinerator burning has been banned within the Los Angeles basin since Sept. 30, 1957, and that the fire should be extinguished immediately.”

I first came across the old incinerator (depicted above) at an estate sale for a house that was listed for sale in mid-city Los Angeles in June 2007. It looked exactly like the images I had seen in my historical research on the collection and handling of trash in Los Angeles as part of my 26 years of work at Los Angeles Sanitation (LASAN). Unfortunately, the incinerator was not part of the estate sale, but rather a fixture of the house. Nevertheless, I was determined to get it as a potential item in LASAN’s collection. The only question was how? As my wife and I were already in the market to purchase a house and this one had a nice charm to it (as well as an incinerator), we purchased the house. Since then, the incinerator was carefully cleaned, disassembled, and reassembled after which it will patiently await a final resting place in the LASAN collection located in the Los Angeles City Archives.