California Women and Politics: From the Gold Rush to the Great Depression 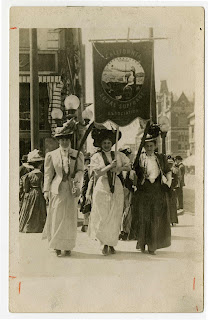 California Women and Politics: From the Gold Rush to the Great Depression

Robert Cherny, Mary Ann Irwin, and Susan Englander discuss their book, California Women and Politics: From the Gold Rush to the Great Depression. In 1911, as progressivism moved toward its zenith, California granted women the right to vote. However, women’s political involvement in California’s public life did not begin with suffrage, nor did it end there. Across the state, women had been deeply involved in politics long before suffrage, and—although their tactics and objectives changed—they remained deeply involved thereafter. The contributors consider not only white middle-class women’s organizing but also the politics of working-class women and women of color, emphasizing that there was not one monolithic “women’s agenda,” but rather a multiplicity of women’s voices demanding recognition for a variety of causes. Book will be available for purchase at event. RSVP to 415.357.1848, ext. 229 or rsvp@calhist.org.
at Thursday, September 29, 2011 No comments:
Email ThisBlogThis!Share to TwitterShare to FacebookShare to Pinterest
Labels: California, California Historical Society, Events, History, San Francisco

I have just completed the online finding aid for a wonderful – and oddly lovely – collection, the San Francisco Schuetzen Verein records, which were donated to CHS by Carolyn Kuri (whose grandfather was a member of the Schuetzen Verein) in 1998. CHS would like to thank Tierney Haupt for processing this collection during her enormously productive internship here this summer.
The San Francisco Schuetzen Verein was founded in August 1859 by Jacob Knell, H. Millemann, and John Reinhart as a militia and shooting society for the city’s new German American residents. In its early days, the organization held shooting tournaments, parades, and eagle-king shoots, as well as regular target practice in . After President Lincoln’s assassination in 1865, the Schuetzen Verein patrolled the streets of for two days and two nights until they were relieved by federal troops. The organization later evolved into a social and athletic club, sponsoring festivals and events around the Bay Area, with headquarters at the corner of Polk and Turk Streets.
Dated between 1860 and 1946, the collection contains a wide variety of materials: administrative records, ephemera, publications, and surprisingly ornate artifacts, including a silk badge with gold brocade, embroidered silk sashes, a leather belt, targets with bullet holes, stamps, and an embossed seal press for the San Francisco International Shooting Festival Association. Like other nineteenth-century San Franciscans, members of the Schuetzen Verein had a passion for regalia, parades, and colorful ephemera – perhaps only to be surpassed by their love of the prize shoot.
This image shows the cover of the San Francisco Schuetzen Verein’s 1909 Golden Jubilee souvenir: 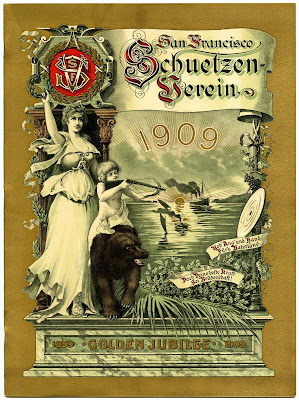 I love the armed cherub astride a grizzly bear. He squints as he takes aim at a target affixed to a column emblazoned with grape vines. Meanwhile, the sun is setting on the Pacific.
The link to the online finding aid for the collection can be found here: http://www.oac.cdlib.org/findaid/ark:/13030/kt696nf4s4
Marie Silva
Archivist & Manuscripts Librarian
at Wednesday, September 28, 2011 No comments:
Email ThisBlogThis!Share to TwitterShare to FacebookShare to Pinterest
Labels: California, California Historical Society, Collections, History, San Francisco 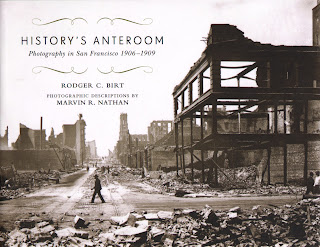 The California Historical Society and William Stout Architecture Annex present authors Rodger Birt and Marvin R. Nathan. They will present and discuss the historical context of History's Anteroom, a collection of vintage photographs made in San Francisco, California, during the years 1906-1909. In April 1906 the San Francisco Bay Area fell victim to a powerful earthquake, and in October 1909 the city hosted a "regional rebirth" with a celebration named the Portola Festival. The photographs and illustrations reproduced here - some only rarely shown or seen now for the first time - have been given a close reading and placed within the specific historical context. The result is a journey back into the early history of the twentieth century and its first great urban catastrophe. Book will be available for purchase at event. Space still available, please RSVP to 415.357.1848, ext. 229 or email rsvp@calhist.org.
at Tuesday, September 27, 2011 No comments:
Email ThisBlogThis!Share to TwitterShare to FacebookShare to Pinterest
Labels: California, California Historical Society, Events, San Francisco 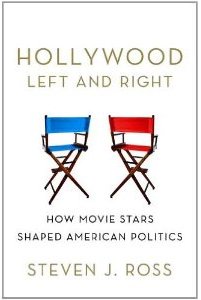 
On September 15, 2011, the California Historical Society in partnership with the Historical Society of Southern California presents a lecture and reception with author Steven Ross featuring a discussion of his newly released Hollywood Left and Right:How Movie Stars Shaped American Politics.We hope you can join us for this special event at the Lummis Home in Los Angeles.


If you are in northern California, we hope you can attend this event at the California Historical Society in San Francisco on September 21, 2011 when author Steven J. Ross will also discuss Hollywood Left and Right:How Movie Stars Shaped American Politics.

In Hollywood Left and Right, Steven J. Ross tells a story that has escaped public attention: the emergence of Hollywood as a vital center of political life and the important role that movie stars have played in shaping the course of American politics.  Through compelling larger-than-life figures in American cinema, Hollywood Left and Right reveals how the film industry's engagement in politics has been longer, deeper, and more varied than most people would imagine.  Hollywood Left and Right challenges the commonly held belief that Hollywood has always been a bastion of liberalism. The real story, as Ross shows in this passionate and entertaining work, is far more complicated. An eminent historian of film, Steven J. Ross is recipient of the Academy of Motion Picture Arts and Sciences' Film Scholars Award and author of the prize-winning book, Working-Class Hollywood: Silent Film and the Shaping of Class in America.Hollywood Left and Right will be available for purchase at event.RSVP required, contact 415.357.1848, ext. 229 or email rsvp@calhist.org.
at Tuesday, September 13, 2011 No comments:
Email ThisBlogThis!Share to TwitterShare to FacebookShare to Pinterest
Labels: California Historical Society, Events, History 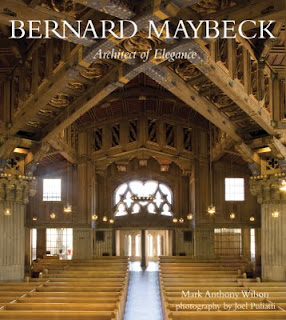 Architectural historian Mark A. Wilson will present a slide lecture on the life and work of Bernard Maybeck, and sign copies of his new book Bernard Maybeck: Architect of Elegance. The author's 22-year friendship with Maybeck's daughter-in-law, Jacomena Maybeck, gave him unique insights into the life and work of one of America's most important architects. The book includes personal letters and drawings by Maybeck, as well as family photos, many of which have never been seen by the general public. Maybeck's granddaughter, Cherry Maybeck Nittler, wrote the foreword, and there are over 220 color photos of Maybeck's buildings by Joel Puliatti, who did the interior photos for Wilson's previous book Julia Morgan: Architect of Beauty.
at Wednesday, September 07, 2011 No comments:
Email ThisBlogThis!Share to TwitterShare to FacebookShare to Pinterest
Labels: California, California Historical Society, Events, San Francisco
Newer Posts Older Posts Home
Subscribe to: Posts (Atom)