Cycles of Drought and Flood

“And it never failed that during the dry years the people forgot about the rich years, and when the wet years returned, they lost all memory of the dry years. It was always that way.”
—John Steinbeck, East of Eden

Alongside its promise of idyllic weather, California delivers cycles of floods and droughts. Our climate history demonstrates stretches of drought interspersed with heavy—and sometimes catastrophic—rains.

As our state struggles through a five-year drought and an El Nino winter, we find ourselves in the seemingly paradoxical period of simultaneous flooding and drought. And, as B. Lynn Ingram and Frances Malamud-Roam write in The West without Water: What Past Floods, Droughts, and Other Climatic Clues Tell Us about Tomorrow, “Climatologists now speak in terms of even deeper droughts, and larger and more frequent floods, for the future.” 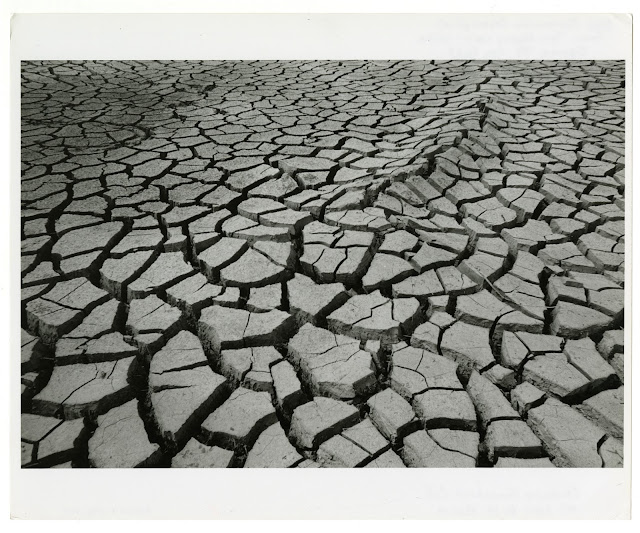 Today, a new Brown administration is addressing water scarcity in a state challenged by climate change, population growth, and dwindling groundwater. As we monitor our debris-strewn rivers, dry wells, and fields of parched grass, Robie’s prophetic warning resonates: “There is no assurance that the next drought is not just beyond the horizon. We can be assured, however, that drought will return, and, considering the greater needs of that future time, its impact, unless prepared for, will be much greater.”

In the late nineteenth century, the San Bernardino-based Henry B. Wesner (c. 1853–1932) photographed the devastation caused by a flash flood in southern California. The destruction—severed telegraph wires, felled steel beams, floating vegetation, and flooded railroad tracks—was common to flash floods in the Los Angeles area during this period. Wesner’s eye-level perspective suggests the river’s momentum as it accommodates new waters in a seemingly peaceful wave. 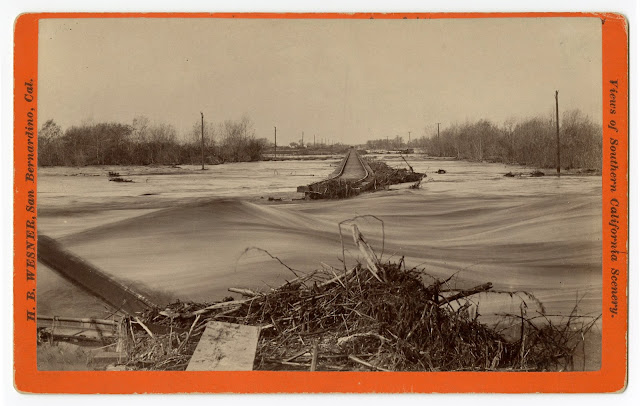 Wesner likely took this photograph in early 1890. In late December 1889, regional storms caused flash floods that washed away several railroad tracks and bridges, including “a broken bridge over the New river.” This nomenclature refers to the effects of heavy rains in 1867–68 on the San Gabriel River—“the most violent and dramatic change in the river since Europeans had begun to occupy southern California”—which changed the course of the river. As nearly 50 inches of rain fell over a 30 to 40-day period, most of the flow migrated east. This flow became known as the “New River.”

Flood control was a signature policy of the state’s first engineer, William Hammond Hall (1846–1934), who added this image to his collection, subsequently donated to the California Historical Society in 1951. Photographs of floods naturally would have interested Hall, though he was unsuccessful in bringing many of his proposals to fruition. Had he succeeded, historian Donald Pisani reflected, “California would have enjoyed the most advanced code of water laws in the arid West.”


Read more about Henry B. Wesner.

B. Lynn Ingram and Frances Malamud-Roam write in The West without Water: What Past Floods, Droughts, and Other Climatic Clues Tell Us about Tomorrow (Berkeley: University of California Press, 2013)

Donald J. Pisani, From the Family Farm to Agribusiness: The Irrigation Crusade in California and the West, 1850–1931 (Berkeley: University of California Press, 1984)