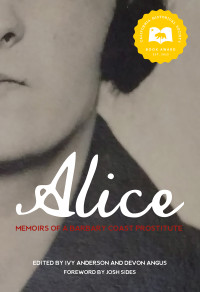 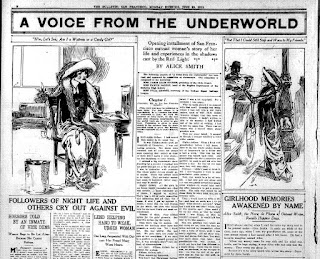 In 1913, under the shadow of the upcoming Panama Pacific International Exposition, San Francisco’s denizens were arguing about the city’s identity. Celebrating its rise from the ashes of the 1906 earthquake and fire, many hoped a “new” San Francisco could be presented during the world’s fair, a San Francisco free from the corruption and vice that had marked it for generations. The Barbary Coast, centered around the brothels, bars, and dance halls of lower Pacific St., came to symbolize blight for much of the city’s upper crust, and clergymen, clubwomen, reformers, and anti-vice newspapers rallied behind the state’s Red Light Abatement law in an attempt to destroy the classic brothel system that had flourished since the gold rush. While anti-vice activists argued the evils of “the Coast” and planned settlement houses for the evicted “red sisters” of the brothels, the voices of the sex workers themselves remained quiet or downright silenced. The attitudes of many in the city were represented by a cartoon in the Hearst owned Examiner, in which a rat in a cage, with the word “vice” sprawled across its body, was being dropped into a bucket of water to drown.
The Bulletin, a paper with a long history of anti-vice vigilantism, surprisingly took a different tack. The paper’s editor, Fremont Older, had cut his teeth as a crusading newspaperman attacking the elaborate systems of graft and corruption that had been a mainstay of San Francisco political life since the earliest years of the city. Following a philosophical shift that came about in the waning days of the graft trials of political boss Abe Ruef, Older published a series of memoirs that sought to give a voice to those who had struggled to be heard during this transitional time. Donald Lowrie’s My Life in Prison, from 1912, uncovered institutional torture in California’s prisons. Jack Black, paroled under Fremont Older’s care in 1913, would pen his underworld classic You Can’t Win under Older’s editorship. Alice Smith’s “A Voice from the Underworld,” lost for over a hundred years, brought yet another obscured voice to the forefront of one of California’s most heated political debates.
In Alice: Memoirs of a Barbary Coast Prostitute, Ivy Anderson and Devon Angus have collected this ghostwritten memoir, written through a series of interviews with Bulletin reporters, for the first time since its publication as a serial in 1913. “A Voice from the Underworld” told the story of “Alice Smith”, a midwestern working class girl who turned to sex work throughout various cities and towns in California in the early years of the 20th century. Her story, as it ran through the summer and early fall of 1913, resulted in some 4,000 letters written into the paper. Of the nearly 300 that were printed, 114 were by sex workers and 30 were by working class women who had considered sex work for themselves. These letters, taken together with Alice’s memoir, provided a platform in which sex workers’ voices, and the voices of poor and working class women, could be heard amidst the din of the louder anti-vice reformers. Four years later, when the Barbary Coast was finally shuttered, madams Maude Spencer and Reggie Gamble turned to Fremont Older for help organizing what may have been the first sex worker’s rights protest in modern history.

Alice: Memoirs of a Barbary Coast Prostitute is the winner of the California Historical Society 2015 Book Award, and will officially launch with a presentation here at the California Historical Society on October 27th. Today we have a sample of Alice’s story to share with you. For more information about upcoming events, where to purchase the book, and to read more exclusive content, you can visit www.voicesfromtheunderworld.com

From Alice: Memoirs of a Barbary Coast Prostitute:

I hadn’t ever been in a rooming house before. I climbed up the stairway and rang the bell by the desk. A woman answered.
“How much do you charge for a small room?” I said. “Steady?’
She looked me over kind of funny. I guess my greenness sort of stuck out, and she wondered what was my game.
“Two dollars a week,” she replied.
I didn’t make any answer, but just walked out and went right on to my Aunt Eleanor’s.
“Auntie,” I said, “I’m going to leave here. I’ve got another job.” I hadn’t, but I had to break away somehow.
She looked surprised, and I could see her thinking the same that grandma had thought—that I was ungrateful. It made me madder than ever.
“I don’t know whether you ever meant to pay me anything for all the work I’ve done,” I said, thoroughly mad. “But if you did, I wish you’d do it now. My feet are just on the ground.”
Well, after a little side-stepping she paid me, making as much over it as if she was doing me the greatest favor of my life. And what do you think she gave me?
Three dollars. For two month’s work.
“Thank you, aunt,” I said, trying to hold my temper. “I’ll try to remember this.”
Then I went and got my things together, marched downstairs to that rooming-house, and rented that two dollar room. I paid the first week’s rent out of the three dollars my aunt had just given me. The shoes would have to come later; I was going to be a poor working-girl now.
Anyhow, I told myself, I was free of relatives for good and all. No more of them for me, except maybe Grandmother Smith. She had brought me here, and she ought to take a little care of me, if I should ever be broke. But no more of step-mothers, aunts, cousins or any of the rest.
Feeling as if I had cut loose from one of my last holds on the world, I went downstairs and walked over to the laundry.
“Any experience?” asked the boss of the laundry.
He was a tall man with a black mustache, and he grinned at me in a way I didn’t quite like.
“Not in this work,” I answered.
“Well,” he replied, “you’re a good looking girl. I can take you on, I guess.”
“What pay?” I asked.
“Six dollars a week,” he said, grinning again.
“But I can’t live on that!” My heart sank.
“Oh, that’s all right,” said the man, grinning worse than ever. “Didn’t I say you was a good looking girl? You can pick up lots of easy money on the side.”
He winked over my head at some other girl who was passing by.
Money on the side! Well, here was something new. What did he mean? Then I knew. That same old fear again.
“All right, I’ll take the job,” I said. “I guess, as you say, I can get along.”
He laughed at that, as if it was a real good joke. I had just said it to be sassy, because he might not want to give me the job otherwise. He told me to come around seven the next morning.
I went back to my new two-dollar room, turned on the light, sat down on the hard bed, and figured things out. I had a sort of feeling as if I was hanging by a thin rope over a volcano.
Six dollars a week. Take out two for room rent—that left four a week for eating, clothes, carfare, washing and a good time.
Cut out carfare. Cut out clothes—for the present. My old shoes would have to do. Cut out washing—I’d do it myself, in my room. Cut out—yes—cut out the good time. I’d need that four dollars just for eating. Divide it by seven. That meant sixty cents a day. Ten cents for breakfast, twenty for lunch, thirty for supper. That would make four-twenty a week—I’d be twenty cents short.
Well, maybe Sundays I’d go without eating, only twenty cents worth.
Maybe someday I’d get a raise in pay. Anyhow, I was free of relatives. That thought brought back that hard, don’t-care feeling.
Or maybe—there was that easy money to be made “on the side.” No; not for me. That didn’t attract me at all. I wasn’t far enough along for that. But the idea stayed with me, and bothered me.