A Wild Flight of the Imagination: The Story of the Golden Gate Bridge eBook 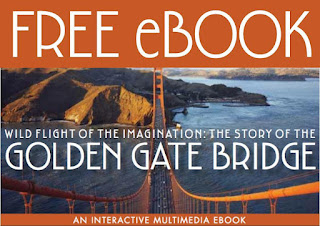 As hundreds of thousands of admirers of the Golden Gate Bridge begin to converge on the San Francisco Bay area to celebrate the 75th Anniversary of the world-renowned icon, the California Historical Society has released its first multi-media eBook for iPads that captures the rich history and amazing story of the Bridge through a selection of rarely seen artwork, photographs, video, memorabilia, stories, images and much more.

The free iPad eBook, A Wild Flight of the Imagination: The Story of the Golden Gate Bridge, can be downloaded through the California Historical Society’s new, dynamic and image-rich website at www.californiahistoricalsociety.org.  The app is also available on Apple's iTunes App Store as a free download under the name “GG Bridge.”

Published by the California Historical Society and produced by Sol Editions and Wild Blue Studios, the eBook was funded through a grant provided by United Healthcare.

“The story of the is a remarkable one, captivating millions of people around the world with its themes of promise, innovation, perseverance, and artistic inspiration,” said Dr. , of the California Historical Society. “This eBook will help share that story and bring the amazing history of this icon to life in an interactive way.”

The eBook’s title is drawn from the exhibition of the same name currently on view at the California Historical Society galleries. The phrase is borrowed from a 1921 promotional prospectus for the in which the authors, chief engineer for the bridge Joseph Strauss and city engineer M.M. O’Shaughnessy, used inspirational language to set a tone for the enormously ambitious engineering feat.

The interactive multimedia app extends the reach of the California Historical Society’s exhibition and makes over 350 historic objects, including dozens of photographs, letters, journals, reports and other ephemera from its own holdings and 19 other collections available to readers of all ages.
Highlights include photographs by Ansel Adams and Dorothea Lange, paintings by Maynard Dixon, Ray Strong, and Chesley Bonestell, and architectural drawings by Irving F. Morrow and John Eberson, the two architects who worked on the bridge design. Audio highlights include the heroic and poignant voices of men who built the bridge and an opening music selection from composer Rob Kapilow’s “Chrysopylae,” A Golden Gate Opus, written with contributions from sound designer Fred Newman.
Readers of all ages can also watch a short film of Chief Engineer Strauss speaking to a reporter on the bridge during construction, examine the family scrapbook of Fred Dummatzen, one of the workers who tragically lost his life when a scaffold collapsed, and even view some of the proposed bridge color schemes that were ultimately rejected.
“This exciting new format allows us to bring the richness of our historic collections to a much larger audience, including teachers and students, and will allow many more people around the world to share in the ’s 75th Anniversary, even if they cannot be here in person,” Hartig said.
at Saturday, May 26, 2012
Email ThisBlogThis!Share to TwitterShare to FacebookShare to Pinterest
Labels: California, California Historical Society, Collections, Events, Exhibitions, History, San Francisco

It was wonderful to see the offer of a free eBook. And very disappointing to see that it is only available for the iPad. That leaves a lot of us members without the ability to read this book.

I just wanted to thank you for making this outstanding book available at no charge. What a great deal!

I would love to read this book on my Kindle -- please make it available to non-iPad users out here.