2016 is the 50th anniversary of the transformative year of 1966 in California, and since the beginning of the year, this blog has been looking at the different ways events in 1966 changed the Golden State (and nation). We have taken a particular look at two diametric forces that began to reach their apex 50 years ago: the rise of the hippie counterculture, particularly in san Francisco's Haight-Ashbury neighborhood, and the rise of Ronald Reagan. Our very first post of the year spelled out this historical dichotomy.

Continuing this focus, today is the exact 50th anniversary of Ronald Reagan's victory in the race to be California Governor, a race that defined Golden State and National politics for decades to come. We asked longtime California political journalist, Steve Swatt, lead author of Game Changers: Twelve Elections that Transformed California (winner of the 2014 CHS book award) to offer his reflections on Reagan's first victory. 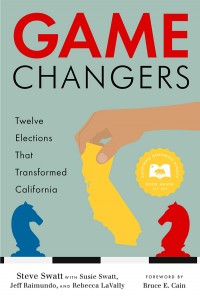 As Donald Trump – the brash reality star – attracted monster television ratings and brutally ridiculed and carved up sixteen Republican opponents to win his party’s nomination, how many times did we hear, “What would Ronald Reagan think?”

A half-century ago in his inaugural run for California governor, Reagan had adopted the party’s so called “11th Commandment,” which said, “Thou shalt not speak ill of any Republican.” The commandment pertained to personal – not policy – attacks and actually was created by state party chairman Gaylord Parkinson after the bitter and divisive 1964 GOP presidential primary campaign between Arizona Senator Barry Goldwater and New York Governor Nelson Rockefeller.

Reagan had dipped his toes into politics by famously delivering a rousing defense of Goldwater and conservatism. In response, he received thousands of letters, many urging him to run for governor, even though party officials had lined up in support of San Francisco mayor George Christopher. “The farthest thing from my mind was running for political office,” Reagan recalled in an oral history conducted by the UC Berkeley’s Bancroft Library. “It didn’t look attractive to me at all. I liked my life.”

Reagan, however, agreed to test the waters and interviewed potential campaign specialists. At first, consultants Stu Spencer and Bill Roberts had their doubts. “We wanted to know, is this a right-wing nut or what?” Roberts remembered. In the primary campaign, Reagan vanquished the moderate Christopher by articulating his vision of conservatism and criticizing what he called bloated government and wasteful spending. Christopher later said Reagan had “no depth” but acknowledged he had “an actor’s ability to steal the scene.”

During the general election, when Gov. Pat Brown – seeking this third term as chief executive – suggested that Reagan was nothing more than an actor regurgitating rehearsed lines that had been written for him, Reagan turned the tables. He insisted that his standard stump speech be shortened and that each speaking engagement include a question-and-answer session. “Someone may think that someone else wrote that short speech,” Reagan said, “but they’ll have to know that nobody could write the answers to those questions.”

Fifty years ago today, Reagan’s million-vote victory over Brown launched him on his presidential trajectory. He’d run for the White House twice (1968, 1976) before enjoying success in 1980. Looking back, Reagan’s campaign style was quaint and decorous by today’s standards. In this season of electile dysfunction -- with a sensory overload of belligerent, bellicose and personal attacks -- we’ve witnessed a sea change in campaign tactics and behavior tailored to twenty-four-hour cable news and Twitter. An anomaly? Or will they now become de rigueur in future campaigns?