Candles. Crucifix. Flowers. Incense. Fruit. Calaveras. These and other elements comprise the ofrenda, or offering—an essential component of Day of the Dead celebrations. Originally a traditional family observance in Mexico, the Day of the Dead is widely celebrated in the United States in both public and private places.

Honoring and welcoming the spirits of the dead, the ofrenda, a ritual altar, is a personal expression of love for those who have died, a feast for the spirits that visit. Both children (November 1) and adults (November 2) are honored. The festivities and rituals of El Día de los Muertos also reflect communal forms of honoring the dead, thus making the act of remembering a collective one.

Diego Rivera’s Ofrenda
In the fresco panel above, the renowned painter and muralist Diego Rivera offers both a conventional and suggestive ofrenda. As the art historian David Craven explained in his book Art and Revolution in Latin America, 1910–1990:


The upper register of his fresco contains an unusual, Indo-Christian cross that is similar to the early sixteenth-century Cruz atrial (Atrial cross) at Acolman . . . . This image attests to the persistence of Native American traditions and the imposition of Hispanic institutions. Precisely because this “dialogical” configuration remains a repository of repressed cultural forms, it has become a stimulus for contemporary Latin American artists seeking to reconstruct their regional identities, thus synthesizing new visual forms with fragments from a splintered past.

Yreina D. Cervántez’ 1989 mural La Ofrenda, painted under a bridge in downtown Los Angeles, embraces this concept of honor and identity. In it, Cervántez—an artist and Chicana activist—pays homage to Dolores Huerta, co-founder with César Chávez of the United Farm Workers of America. 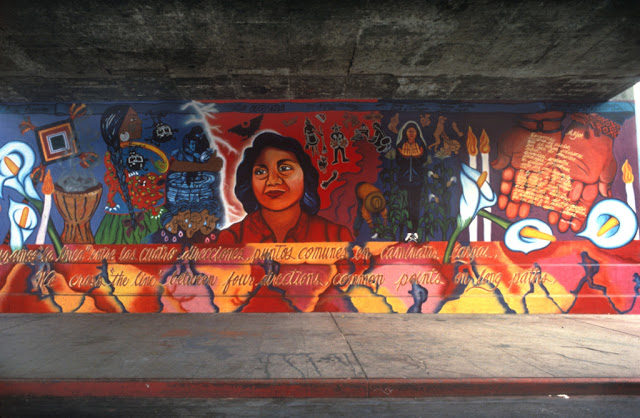 
The Social and Public Art Resource Center (SPARC), a collaboration between communities and artists, observed:


The offerings come in form of candles, calla lilies, a god’s eye, and images of the workers for whose rights [Huerta] fought for. On the right side of the piece, open hands display a poem by Gloria Alvarez. The mural is an homage to the strength of Latina women. It brings attention to the hardships of war and immigration, while highlighting the life and hope that endures through these struggles.

In a recent interview, Cervántez recalled the mural’s numerous intents:


Everything in this mural is really a kind of a dedication, an ofrenda, an offering to the community. It speaks about spirit as well and Native American practices in terms of spirituality and how we reclaim that as a form of decolonizing ourselves.
This mural was done in 1989 and it was done to create a kind of bridge of solidarity between the Chicana/Chicano community and the Central American/Latin American community in regards to all of the immigration that was happening because of the wars in Latin America and Central America.

It was also meant to be a homage to of course the struggles of working people here and everywhere and in particular the Farmworkers Union which is why Dolores Huerta is prominent in the mural.

Also it was meant to be an homage to the fact that it is women many times that are at the forefront of creating positive change.

Restored for the first time in 2012, La Ofrenda was continually vandalized over time. By 2015, the CityWide Mural Program’s (CWMP) had added it to its list for conservation with the support of the Department of Cultural Affairs. Instead, the mural was completely covered by another mural. Finally, on July 20, 2016, CWMP led a new restoration effort.

The neglect, defacement, destruction, and censorship of murals that promote Hispanic/Latino identity and activism have been troubling and ongoing occurrences in the Los Angeles communities for whom these artworks were created and for the artists who created them. 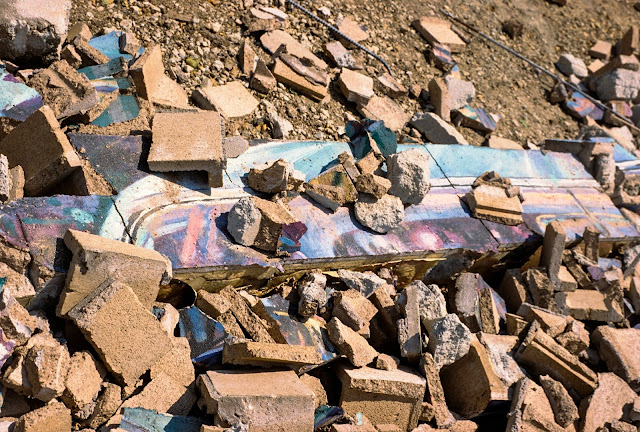