Times change—and names change with them. Today the National Park Service is in litigation over concessionaire Delaware North’s renaming of historic properties in Yosemite National Park. Each of these names—The Ahwahnee, Curry Village, the Wawona Hotel, Yosemite Lodge at the Falls, and Badger Ski Pass Area—has historic meaning to the park and to millions of visitors.

Naming Yosemite dates to 1851. In that year Lafayette H. Bunnell, a member of the Mariposa Battalion—which “discovered” Yosemite Valley when it was sent to forcibly remove the native population from the area—suggested they call the site “Yosemite” after what he thought was the name for the local Indians.

The name stuck, but the translation changed over time: first to “a full-grown grizzly bear” from the northern and central Miwok dialect and as recently as the 1960s to “some of them are killers,” a southern Miwok description of the Paiute tribe.

Below we remember Yosemite’s historic names—side-by-side with the new—with images of these beloved places from the California Historical Society Collections.

The Ahwahnee / Majestic Yosemite Hotel
The human history of Yosemite began about 6,000 years ago, when indigenous populations came to the Yosemite Valley. By the beginning of the nineteenth century, the Ahwahneechee tribe had lived there for generations with little contact with non-natives. They called the valley Ahwahnee.

As Kerry Tremain, creator of the award-winning eBook Yosemite: A Storied Landscape, has observed, the architects and artists who designed the Ahwahnee Hotel, built in 1927, “reflected the values of their social set, which stressed the conservation of nature and a broader acceptance and curiosity toward other cultures.” Taking the Ahwahneechee’s name for Yosemite Valley, The Ahwahnee also honors the Native American culture in its interior, with native-inspired mosaics and basket designs.

In June 1899 former Indiana schoolteachers David and Jenny “Mother” Curry opened Camp Curry, Yosemite’s first affordable lodging. For $2 a day, visitors were provided with food and lodging in one of the camp’s seven tents.

As daughter Mary Curry Tressider recalled, “The seven tents grew during the first season to twenty-five and the number of guests reached almost three hundred, which was considered a very good beginning. . . . Each guest seemed to take a personal interest in the young concern and it was by their personal recommendations to their friends that Camp Curry—as the camp came to be called by its neighbors—had its immediate and steady growth.”

In early 1856, Galen Clark, who later became Yosemite’s first Guardian, built a small cabin on the west end of a meadow near the Merced River’s South Fork. The cabin, called Clark’s Station, soon attracted travelers to the region. Later known as Clark and Moore’s (1870) and Big Tree Station (1875), the lodging was eventually named Wawona, from the Southern Miwok name for the Evening Primrose, Wawo’na, whose seeds were part of the native diet.

From its inception, the Wawona, a Victorian-era lodge at Yosemite’s southern entrance, nourished our national and regional histories. Thomas Hill, a nationally famous landscape painter, established a studio there, which he ran during the summers from 1886 to his death in 1908. Regionally, the hotel played a significant role in the areas of transportation (routes into the part), commerce (as a major resort hotel), and conservation (through Galen Clark’s Guardianship).

Yosemite Lodge at the Falls / Yosemite Valley Lodge
The history of Yosemite Lodge at the Falls begins in the early 1900s, when the U.S. Cavalry, acting as the park’s rangers, established a post in Yosemite Valley in 1906. From Camp Yosemite they administered the supervision and protection of the park. To accommodate the influx of visitors—many of them anticipated for San Francisco’s 1915 World’s Fair—in 1915 the army camp was converted to lodging facilities. The camp’s largest building, Fort Yosemite, became Yosemite Lodge, a complex of cabins and tents.

By 1916, the army had been relieved of its stewardship. That year, Yosemite was incorporated into the newly established National Park Service. In the early 1920s, the Yosemite Park and Curry Co. became the park’s concessionaire, and in 1956 The Lodge, as many called it, was renovated, enhanced by a gift shop, post office, swimming pool, grill, and cafeteria. A flood in 1997 destroyed half the original buildings and led to a redesign of the complex. In the mid-2000s, the Lodge was renamed Yosemite Lodge at the Falls to capitalize on its proximity to Yosemite Falls, the park’s highest waterfall and one of its key attractions.

Badger Pass Ski Area / Yosemite Ski & Snowboard Area
At the south rim of Yosemite Valley along Glacier Point Road is the Badger Pass Ski Area, a 282-acre winter sports facility. Conifers line its north-facing mountain peaks and lead to a protected meadow below. These features brought about the area’s establishment as a winter recreational location and its historic significance as one of California’s earliest developed downhill ski areas.

Allegedly named by a stage coach driver who saw a badger while resting his horses at the pass, Badger Pass Ski Area became home to the Yosemite Ski School (established in 1928) in 1935, when a ski lodge also was erected on the site.

From the 1930s through the 1950s, Badger Pass Ski Area was a center of professional and amateur downhill ski competitions in California and the United States. Today it is one of three ski areas with lifts operating in a National Park, providing both downhill and snowboarding activities.

Here at CHS headquarters in the former enclave known as Yerba Buena we understand that names change—and times change with them.

From the California Historical Society and 36 Views, with the Yosemite Conservancy
The Award-Winning eBook Yosemite: A Storied Landscape 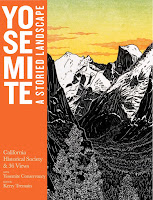 Published in conjunction with the exhibition Yosemite: A Storied Landscape (June 29, 2014 – January 25, 2015), this enhanced eBook tells stories of Yosemite in words, pictures, videos, and interactive graphics and games that restore freshness, energy, fun, and intimacy to one of the most beloved places on earth. Part of the celebration of the 150th anniversary of the Yosemite Grant—the landmark preservation legislation that created the park—Yosemite: A Storied Landscape is filled with utterly surprising, funny, poignant, tragic, and revealing tales from America's first park.

For more information about the eBook and how to purchase it, visit http://www.californiahistoricalsociety.org/publications/ebooks/ and http://www.yosemitestories.org/.

Twenty percent of your purchase goes to support the Yosemite Conservancy.