Historic Techniques: A Series about the Intersection of Art, Science, and History 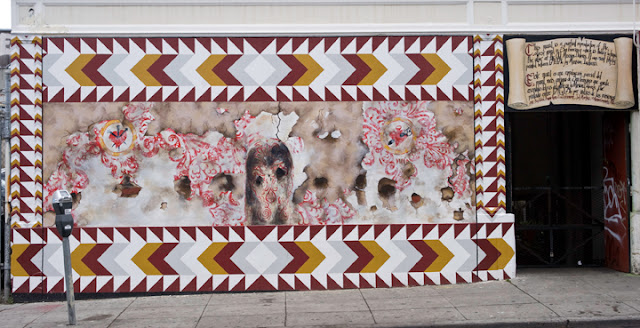 The genesis of the program series Historic Techniques originated, perhaps fittingly, with a chance meeting at the vintage paper fair at the Golden Gate Park botanical garden in the autumn of 2013. The California Historical Society had a booth, and while I was perusing the antique post card collection with the assistance of my wife, I came across their booth. This auspicious meeting, and subsequent discussions gave birth to the concept of a series that looks at how contemporary artists and media makers create relevant work that bridges the past and future. Early on we sought out ways to engage the community with techniques that local artists are borrowing from the past.


I had just completed a short documentary about Eadweard Muybridge and the CHS was in the midst of their planning for the 100th anniversary of the Panama-Pacific International Exposition (PPIE). Inspired by my Victorian era “Magic Lantern” projector, we were particularly interested in the early period when moving images were born. Who today might encompass the pioneering spirit of early image-makers of the PPIE and how might they reflect upon the use of such media in the present?

I chose to work with local art makers in the San Francisco community who I hope will reflect the experimental spirit of today. Among those is filmmaker Kerry Laitala, who with equal doses of interest in the 1915 Fair, and her optic light making processes, appears to have found her natural habitat.  In fact, during the process of making her two-fold installation for both the Palace of Fine Arts and the CHS, so inspired was Kerry that she found herself walking down the esplanade of the fair, only later to awake from a dream.

Inspired by efforts of ethnographers to save indigenous languages during the same period, experimental physicist, Carl Haber is reclaiming historic sounds without adverse affect to the original wax cylinders on which they are stored. I met Carl in his lab in 2004 when I too was using the tools of contemporary technology to record the Mission Dolores mural.

Tim Pinault, a photographer, who uses historic photo processes, proved to be an invaluable collaborator when I worked on my Muybridge project.  Using the collodion process, much like Muybridge in his mobile flying laboratory of the 1860s, Tim Pinault develops his photographs on location.  At the time he was teaching the technique of wet plate photography at the Art Institute.  Ed Drew, one of his students, follows up by demonstrating that Tin-Type photography is still relevant, discussing his recent photography projects of contemporary Native Californian and Combat Guards in Afghanistan.

While in the midst of a video projection onto Palo Alto’s historic water town in 2012,
I met performer and media maker Lessa Bouchard, who kicked off the series on June 4th introducing her collaborative performance A Moment Unbound. CHS was an ideal venue to witness the performer talk about ephemera, the archive, and the increasing value of the book as an object of memory. Surrounded by archivists and librarians from Palo Alto it also offered a glimpse into the potential vitality of a history museum. By offering a space among the objects and artifacts of history, we engage community discussion about making history an active process of creating socially engaged art.

My own upcoming presentation, the Walls Have Eyes, will center on various projects over the past decade that I have sought to do so.  I have developed a visual art practice, based in San Francisco Bay Area, that retrieves hidden histories from the fabric of our historic, cultural and personal heritage, from the buildings we inhabit to the documents and stories that can be reclaimed through generations.  This is a documentary based, site specific visual practice, that strives to create a bond of community through sharing these histories specific to people and place.

My career-long interest remains the hidden histories that lie dormant within buildings in our community.  A hybrid aesthetic in the form of public projections is at the core of my work, and communicates a reawakening of history, exposing realities of our current time and place.  By highlighting hidden histories with the tools of contemporary media, in the built environment, we are able to encourage people to reassess a past to impel awaking and consciousness for the present.

Over the course the presentation I will present a combination of projects that explore the projected image as a vital tool for engaging community.  My demonstration will center on two historic episodes in San Francisco's history. The first, a documentary/performance about British photographer Eadweard Muybridge - via a magic lantern - will bring the audience back to the experimental period of the 1870s when Muybridge captured the horse in motion, produced an unprecedented San Francisco panorama, and seemingly got away with murder.

The second show-and-tell will focus on a 10 year-long project to reveal an 18th century mural hidden behind the altar at San Francisco de Asis.

Moreover this presentation will offer a glimpse into this new series - Historic Techniques: A Series about the Intersection of Art, Science, and History.

Upcoming events in this series are:

Historic Techniques - The Photo as Object and Object as Photo with Tim Pinault
Thursday, August 6
Get Tickets

Historic Techniques - Aura and the Spectacle of Light with Kerry Laitala
Thursday, October 1
Get Tickets


Ben Wood is currently working on an installation Lopa Picka  (Rope Picture) for the façade windows of the CHS, which will be on display August 20th – October 4th, 2015 as part of the Engineers of Illumination Series.  Lopa Pikta or Rope Picture refers to the term used by Ishi to describe motion pictures. Through pictures and sound recordings, this installation shares some of the collection produced by Ishi, Alfred Kroeber, Thomas Waterman, and Saxton Pope, during their extraordinary cooperative effort to preserve the language, culture and legacy of the Yahi.

Since 2004 Wood has created large-scale video projections on Coit Tower, Dewey Monument, and other buildings in San Francisco. Much of his work retrieves hidden histories from the fabric of historic, cultural and personal resources, from the buildings we inhabit to the documents and stories that can be reclaimed through generations. Wood has a Masters Degree in Visual Studies from the Massachusetts Institute of Technology. He has taught at various colleges in the bay area and most recently as Senior Lecturer in the Interdisciplinary/Diversity Studies and Community Arts program at the California College of the Arts. He is a recipient of the California Governors Award for Historic Preservation and is a recipient of the EB-1 Green Card, on the basis of his artistic contribution to the US.

at Wednesday, June 24, 2015
Email ThisBlogThis!Share to TwitterShare to FacebookShare to Pinterest