The destruction and devastation suffered by Northern California vineyards during the recent fires will have significant impact on our state. There will be new beginnings in industry and in families and communities. In this blog, we recall the time when the state's wine industry was first established and gaining prominence in our state's economy.


Historically speaking, with the exception of the Indian wars, great things were happening in California about 150 years ago. The Civil War ended, along with the state’s financial support and participation of the California Brigade, California 100, and California Column. Four Sacramento merchants—Charles Crocker, Mark Hopkins, Leland Stanford, and Collis P. Huntington—were financing the Central Pacific Railroad’s construction of tracks for the transcontinental railroad. Yosemite Park was enjoying its newly created status as the state and nation’s first park under federal protection. The University of California was founded, becoming a public trust shortly thereafter. The state’s new and present capitol in Sacramento was under construction.

In Los Angeles, an economic boom was underway due primarily to the production of wine. Whereas most people today might pinpoint Northern California as the birthplace of California wine, it is Southern California—and Los Angeles in particular—that holds this distinction.

The Southern California missions were producing wine as early as 1782 at Mission San Juan Capistrano and by 1796, most likely earlier, at Mission San Gabriel. As wine historian Thomas Pinney writes in his definitive The City of Vines: A History of Wine in Los Angeles, by the time Mission San Gabriel was secularized, in 1834, its vineyard reportedly had about 160 acres of vines, making it the largest wine producer among the California missions. A pen-and-ink watercolor from The Bancroft Library collection—created in 1854, shortly after statehood—shows a comparison of the land the mission devoted to grape-growing and to its buildings.

The wine produced at San Gabriel Mission was not made from native California grapes (Vitis girdiana), which were deemed unsuitable for wine. Rather, the mission cuttings that were planted there were the Mission grape, an old Spanish variety from Baja vineyards. It is this vine that was planted at all the California missions.

And it is the Mission grape vine that was planted—and has been growing for about 150 years—on the pergola in the courtyard of Avila Adobe, Los Angeles’s oldest standing residence, built in 1818 on Olvera Street in downtown Los Angeles. In 2014, Michael Holland, home winemaker and Los Angeles’s city archivist who rediscovered the vines, sent a sample from this vine to Foundation Plant Services at the University of California, Davis, which conducted DNA analysis.

As FPS manager Jerry Dangle told the Los Angeles Times, the vines “match what has become known as ‘Viña Madre.’ This is the famous ‘old Mission grape of California’ growing at the San Gabriel Mission. We know from our analysis of samples from San Gabriel that this variety is a first-generation hybrid between a native Southern California grape (Vitis girdiana) and the European grape (Vitis vinifera) variety ‘Mission’”—a cross between the grapes that the Spanish missionaries brought over in 1769 and local wild desert grapes. 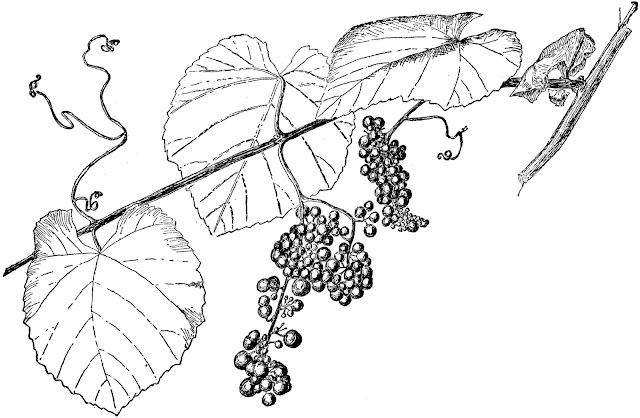 After harvesting the grapes from the “rooftop vineyard,” Holland produces angelica, a blend of adobe's grape and neutral grape brandy, derived from an 1891 Mission Santa Barbara recipe. “It made sense to make angelica—the fortified wine invented in Los Angeles at the time of the mission system by the parish priests," Holland explained. “2017 will mark the third vintage of this living history project. The vines are healthier today than they have been in quite some time. The harvest has grown from 40 pounds in 2015 to 70 in 2016. We may have more than that this year,” he observed last month.

As of this writing, Holland has picked 50 pounds of the adobe’s Mission grapes from the courtyard pergola. “Each pick,” he told this writer, “has focused on the ripened clusters while other have been left to further ripen. The last pick is scheduled for Friday October 22, during which most clusters will be harvested. The total poundage of grapes could be close to last year’s 70 pounds or greater.”

Wine and history buffs will have an opportunity to learn for themselves the results of this year’s harvest by attending the book launch of wine historian Thomas Pinney’s The City of Vines: A History of Wine in Los Angeles, winner of the 2016 California Historical Society Book Award, co-published by CHS and Heyday.

And we all will be watching the harvest of 2018, when the city celebrates the Avila Adobe’s 200th anniversary. 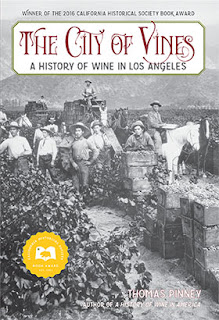 at Saturday, October 14, 2017
Email ThisBlogThis!Share to TwitterShare to FacebookShare to Pinterest