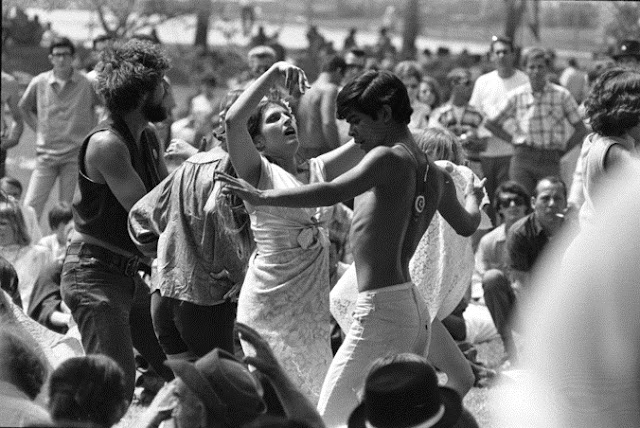 The year 1967 was a ground-breaking year for California’s counterculture movement, with Be-ins/Love-ins; sex and drugs; peace and love; rock and roll and anti-war protests.

The year first exploded in San Francisco: On January 14 a “Human Be-in” was held at Golden State Park, attracting national media attention and putting the Haight-Ashbury counterculture on the map. Tens of thousands of people arrived to hear the Grateful Dead, Big Brother, Timothy Leary, among others, speak and perform. As the Los Angeles Times noted in its 2007 article “‘Human Be-In’ begat the ’60s’ Summer of Love”: “In many ways, the ’60s as we know them began Jan. 14, 1967.”

That same day, about 400 miles south, a Human Be-In simultaneously occurred in Los Angeles. As one blogger recalls:


The first of the Griffith Park Be-ins or Love-ins just seemed to happen: 500 youths gathered around the Griffith Park Merry-Go-Round, the iconic carousel that inspired Walt Disney in the early 50s to create Disneyland. It was a simple affair; the music was someone's guitar or someone else's transistor radio, and unlike the tens of thousands who, on the same date, attended San Francisco’s Human Be-in, the L.A. affair was pastoral and carried with it a sense that maybe, finally, the clash of cultures, the frenzied reactions by the city and the LAPD, had finally waned.”


Los Angeles was a great place to be in 1967. I made the natural transition from beatnik to flower child. The sit-ins to protest the escalating war in Vietnam led to the first Human Be-Ins, held simultaneously in San Francisco and Los Angeles. I was in attendance at the Be-In in Griffith Park and felt a part of the whole scene—the music, the free-spirited people, the psychedelic clothing and general good vibes. 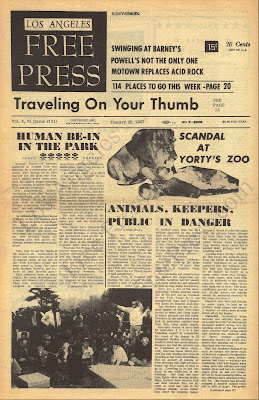 Both the Los Angeles and San Francisco Human Be-Ins were planned together informally, the Los Angeles Free Press noted. “This marked for the first time this city’s public parks have been used for such a unique function, long a custom in cities like New York and San Francisco,” the paper reported. In posters advertising the event during the previous week, “people had been asked to bring ‘the color gold, incense, flowers, and pictures of your favorite guru. . . . Many distributed incense and flowers all afternoon. They also exchanged cookies wrapped in colorful paper, tangerines, African thumb pianos, sandwiches, bells, and dozens of trinkets and amulets.”

The idea caught on, and this first Los Angeles Be-In soon led to others. Here’s a look back at some of them. 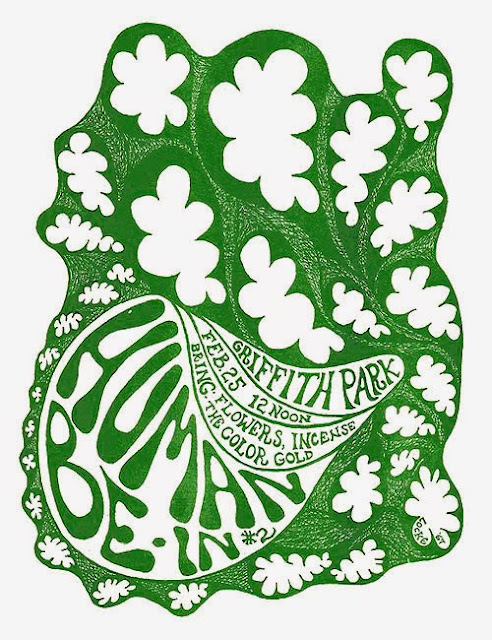 Crowds at Los Angeles’s second Be-In were far greater than the first. “Approximately 5,500 people are in attendance and enjoy a continuous stream of bands throughout the day-long event,” including the Doors, according to the Doors Interactive Chronological History. As Simon Rycroft  notes in “Global Undergrounds: The Cultural Politics of Sound and Light in Los Angeles, 1965–1975,” “. . . the music festival was proclaimed by some as a new development for the city, a turning point in the local politics of dissent from the city’s characteristic form of theater of cruelty to the theater of love.” 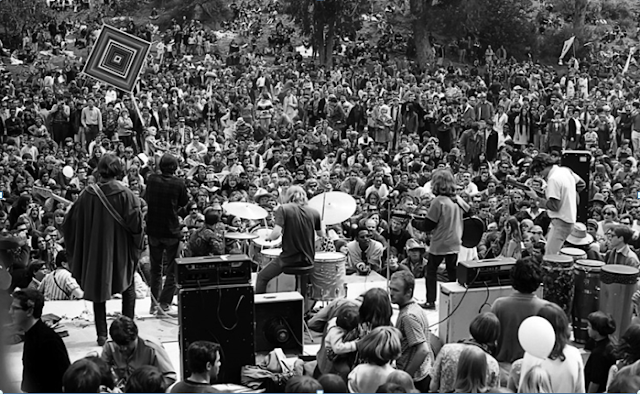 Another one of the city’s first large "Love-Ins" (which many hail as the most successful to date in early 1967) that helped establish a pattern of weekend Love Ins and Be-Ins that would continue until the early 1970s was held on Easter Sunday, March 26, in Griffith Park. As the West Coast Fog notes: “Beginning as impromptu Human Be-Ins over by the Greek Theater and Fern Dell, these pretty-much word-of-mouth gatherings were getting larger and larger and were moved to bigger areas like Elysian Park and the other side of Griffith Park by the merry-go-round. This one was the biggest one yet.” 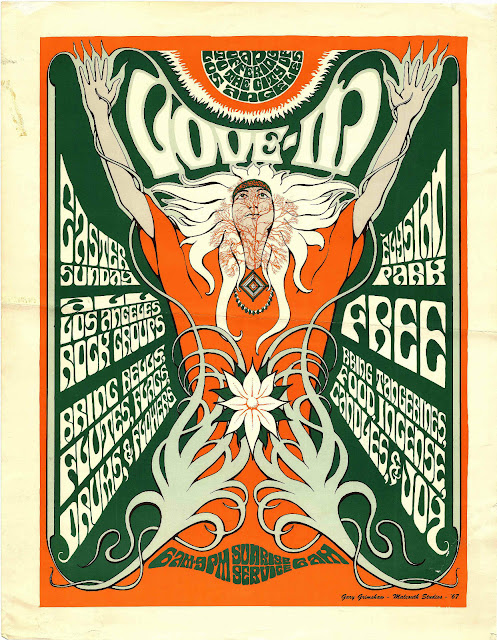 A BBC reporter covering L.A.’s hippie culture observed: “In Griffith Park Los Angeles, hippie tribes gather 20,000 strong for a Love-in. The new waves come bearing beads and blossoms and bells, looking for a new experience and new magic, wandering the woods like children of the children’s crusade, leaving only a trace of gentleness in their wake. . . . For the Love Generation, it’s just the beginning. Their numbers grow, their philosophies spread. If you can stand, or understand, this flowering segment of the younger generation, there’s little point in getting cross and calling it names. . . there’s no point at all in just wishing it would go away. You will go away first.” 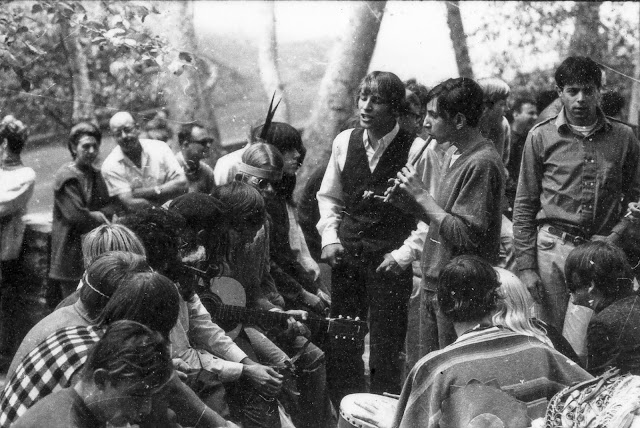 The peaceful nature of the Be-Ins and Love-Ins would give way to an era of protests and violence, and some attendees were arrested at a July Be-In. As thousands of youths flooded into Los Angeles, Rycroft writes, “an uneasy alliance between the city’s Hells Angels and the countercultural community was forged, causing problems with the police and resulting in a near riot at the July Be-In. . . . Eventually, the violence heralded the end of the Love-In era in L.A. . . . Even the global, tribal, and unifying phenomena of the Be-Ins as they were grafted onto the city seemed affected by the different character of L.A.’s underground community.”

Meanwhile, just as the Human Be-In and the media around it helped spread the influence of the counterculture through California and the United States, its impact was also being felt on the West Coast across the border in Vancouver where several hundreds hippies descended on the city's Stanley Park. This week, the Vancouver Sun looked back at that event here. And in New York City, more than 10,000 gathered in that city's famous Central Park.