1966: A Year that Changed California, and the World.

With the start of 2016, the California Historical Society is turning its attention from the Centennial of the Panama-Pacific International Exposition to the 50th anniversary of the critically important year of 1966 in California. It was a year that put into motion powerful—yet diametrically opposed—forces that transformed the State and country, then and...now.

One set of forces was the rise of a "counterculture" in San Francisco. In early January 1966, the city's youth scene was well on its move from the "Beat Generation" neighborhood of North Beach to the cheaper Western Addition, near the intersection of Haight and Ashbury Streets. In fact, it was only a few months earlier, in September 1965, that the word 'hippie' was used for the first time in a West Coast newspaper. The term was used to describe young people who had begun congregating—with unique, identifiable customs and interests—in a coffee shop in the Haight-Ashbury neighborhood.

CHS's next exhibition, "Experiments in Environment: The Halprin Workshops, 1966-1971 (January 21-May 1)" about the famous interdisciplinary workshops led by Lawrence and Anna Halprin (he a landscape architect, she an avant garde dancer), opens on the exact 50th anniversary of an event that would catalyze this nascent hippie culture and launch it with a dynamic power that would soon transform youth culture around the world: The Trips Festival.

The Trips Festival combined music by the Grateful Dead, dance performances by Anna Halprin (whose studio was located right off Haight Street), innovative light displays, and more over three days from January 21-23, 1966. 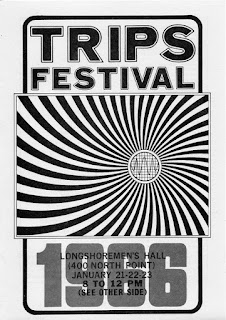 Yet it was on this very day 50 years ago that another set of forces—perhaps even more powerful than the cultural might of the hippies—were set in motion. On January 4, 1966, actor Ronald Reagan announced his candidacy for the Republican nomination for Governor of California. Shortly after a press conference in Southern California, Reagan released a half-hour film that was aired on television outlets throughout the State. The film captures many of the themes—fiscal responsibility, limited government, welfare reform—that Reagan would use to win the White House less than 15 years later and user in a new era of American politics. In the 1966 election Reagan defeated former San Francisco Mayor George Christopher for the Republican  nomination and incumbent California Governor Pat Brown in the general election to win the Governor's Mansion. Part of Reagan's campaign, as seen in this campaign film, was a reaction to the cultural excesses and anti-war sentiments of the hippies—and a pointed rebuke of the University of California's handling of student protests and the Free Speech Movement.

The rise of the hippies, and the rise of Ronald Reagan, together, yet apart, in California in 1966. Happy 50th Anniversary...

Experiments in Environment: The Halprin Workshops, 1966-1971 opens at the California Historical Society on January 21. Join us for the opening celebration, and several other events marking the 50th anniversary of the Trips Festival. Learn more about the exhibition and related public programs at experiments.californiahistoricalsociety.org